what's with the eye twitch?

I have developed an eye twitch.  I would assume it is stress related.  Summer stress.

Ah, summer.  It used to mean no schedule.  Racing up to the pool whenever possible.  Meeting up with friends.  Now it is all about shuffling cars and trying not to forget to pick people up from their stuff and begging (I do mean BEGGING) people to put their shit away.  And then there is everyday nonsense such as: 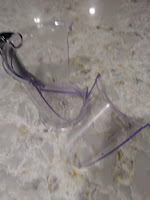 This (to the left) fell out of the fridge yesterday.  Reg opened the fridge and it fell out.  This Ninja jug was half full of protein/fruit smoothie.  I make a batch for breakfast daily and any kid that has already left the house helps himself to some later.  I thought Ed (the family health nut who lives for his protein shake) was going to explode when he found the broken container.  Reg cleaned it all up.

I was out buying a gently used quadruple stroller for my babysitting adventure in the fall.  I can explain.  I feel like I have been promising lots of upcoming posts.  Hey, something to look forward to, right?  Well you might have to remind me what I was supposed to tell you.

When Reg called, I was driving home from the city with the stroller in the back of my 12 seater-former-airport-shuttle van.  Reg called me to confess about the broken Ninja jug.  I couldn't keep my eyes open on my drive in the rain with the huge stroller that filled most of the rear window.  I was so tired, I missed my exit.  Ugh.  I didn't even have the energy to get upset about the Ninja jug.  I got home and in less than 3 minutes I ordered a replacement jug on Amazon for $23.  And I told Ed to relax!

Why am I always so damn tired?  I laid down Tuesday evening at 4:30.  Coach was taking kids to the swim meet.  People, I woke up at 7:30 AT NIGHT!  I know the house was quiet, but still!  Who takes a 3 hour nap in the early evening?  My sleep has been officially thrown off all week.

Anyway, I didn't blame Reg.  The fridge can sometimes be very full.  A little jostle and something is going to go flying.  He must have done a good job cleaning it up because I haven't been sticking to the floor.  So, there's the silver lining.  I suspect he was afraid of getting in trouble with me.  Kind of like Mini being afraid of getting in trouble with me over the lack of underwear thing.

Do you know what this is to the right?  It is a giant bag of rice being used to dry out Lad's phone after he dropped it in the hot tub at the health club after his workout last night.  Fingers crossed that the rice will save his phone and absorb all the water from the phone.  The phone was purchased in mid May.  At Walmart.  Cringe.  Don't get me started, and don't make me go back there.  It is too soon!  That's right, his phone is only a month old.  Note to self:  buy more rice.


I recently ordered colored tumblers from Amazon.  These 6 cups come in 6 different colors.  And they fit in the dishwasher.  Perfect.  Just what we needed.

Coach is a kitchen nazi.  He can't stand it when the kids use more than one cup.  My plan was that if everyone had their own color cup, then they would remember which cup was theirs and they wouldn't just grab ANOTHER cup.

Lad REFUSES to use his yellow cup.  I think he was asleep when the other kids called dibs on colors.  Early bird gets the favorite cup color, I guess.

I literally hid all other cups, mugs, and glasses the other morning.  The only cup left in the cupboard was the yellow cup.  Lad had no choice.

But he found the coffee mugs.  Of course.  No one drinks coffee in our house.  Or tea.  His coffee mug was in the sink this morning.  He had used it for his morning protein shake.  Of course, he left it in the sink.

None of them can load anything in the dishwasher during the day.  It is going to be such a long summer.

I used to love summer, but my kids are making messes, demanding rides, and acting taxed when I mention expectations.  I may have a twitchy eye, but hey -at least we can park two of our three cars in the garage again.  Even Coach was impressed with my garage efforts.

There are only three of us in the house but somehow ALL the glasses get used. I informed Man-Child yesterday that he only needed one glass per day; he looked confused. And he doesn't put anything in the dishwasher - despite the fact he's home all day; drives me bananas.

This is part of the reason I put 2 dishwashers in the new kitchen, but it is still mind-blowing that they use so many cups. Laddie refuses to use the yellow cup that we assigned him. I literally packed all other glasses (hodge podge and ugly) in a box and hid it, so he has no choice. Desperate times . . . I will win this battle!

I am such a glass hoarder! I love having a fresh glass. It's terrible. If you are glaring at me, I deserve it! The six colored cups is a genius idea, though!

I thought it was genius too. If I could just get my kid to quit resisting progress!