this JUST happened, in real time- LOOK WHO WE MET!!!

Curly and I flew to Princeton, NJ painfully early Friday morning.  Laddie was playing in a water polo tournament there, and I currently have Fridays off.  Lad's first game was in the late afternoon Friday followed by two games on Saturday.  One night in a hotel plus cheap flights.  Priceless.
I decided Curly could miss school.  6th graders can make work up, right?  Then it turned out to be a half day (I never looked at the school schedule when I booked the flights).  I was like 'Swell, you won't have any homework!'

Curly ended up being a bit disappointed, because half days are fun days at their school.  Team building and so on.  This half day was for the annual school run.  Oops.  Curly is a speedster.  I told her she could beat all the boys in 7th and 8th grade.  This half day our team building time would be spent cheering for Lad.

We loved downtown Princeton.  Lad ended up staying in our hotel room because his school team is on a tight budget.  The coach (not to be confused with my Coach) was booking 4 kids to a room and then one kid was going to have to sleep on the floor.  With Lad at our hotel, then each kid got to share a bed.  Besides, Lad is no dummy.  He knew he would get a better night sleep in a hotel with us early-to-bed types.

After Lad's last game, we said good-bye and decided we had enough time to eat a quick dinner before heading to the airport.  We parked the car - people, this is no easy feat in Princeton.  Like any busy downtown area, parking spots are tough to come by.  At one point, as I struggled to park my medium sized rental car, Curly whispered 'Thank God you aren't driving the Great White!'  Parallel parking is not my favorite thing.  I started sweating thinking the surrounding drivers were getting ticked as I jockeyed back and forth into the spot.

Saturday at 5:00 pm, Curly and I - now totally familiar with Princeton - found a spot a few blocks away from the restaurant that we wanted to eat at.  The place, for all of those of you who might visit Princeton University someday, is on Nassau and it is called Tacoria.  Mexican fare.  Awesomeness.  Thus our 2nd meals there.

We joked on the way to the airport that they might have to announce to our fellow plane passengers: 'Excuse us but Passenger Shenanigan in isle 8 ingested black beans two consecutive dinners.  Sorry in advance for the inner-flight turbulence.  You've been warned!'

As we walked up the street away from our rental car, I heard a familiar voice.  A man was leaning into the barber shop that we were passing (AT EXACTLY THE RIGHT MOMENT, MIND YOU).  He announced:  'Hey guys, I am moving here in two weeks and this is where I am getting my haircut!  See 'ya!' 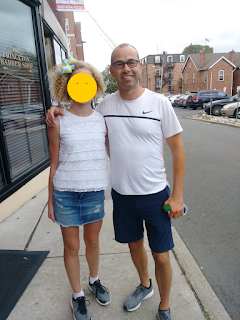 His back was not two feet from my elbow.  I stopped in my tracks and turned around.  As he popped out of the doorway to face his girlfriend, I gasped.  Loudly.

'Hey!  You have NO IDEA how often your show in our house!!!  Can I take a picture with you and my daughter?'  He said 'Sure,' and his girlfriend stepped out of the way.

Curly stood next to him and I held my phone up.  Then I gave him a brief Shenanigan life story.  'So we are in town to watch my son play water polo.  He goes to (insert school in New York) and we are from Chicago.'  People, I am a long-winded type (collective, 'No!  Not you?!' from my readers.  Kari, go ahead and weigh in here.  I have thick skin).  I managed to refrain from saying anything else.  Just 'Thanks!'

He responded with, 'Cool!', (which Coach later translated for me in case I was confused, to 'I don't really care.  Leave me alone.')  And then he and his girlfriend waved good-bye and Curly and I wandered star-struck to the Tacoria restaurant.

I am curious to know if any of you recognize him.  Go ahead, take a stab.  Use my comments below - you can do it, even if you have never commented before!  Do you know who this guy is or what show he is on?

I have absolutely no clue but I'm glad Curly is excited about it!! Sooooooooooo- who is it??

Not a clue. But then I live under a rock.

And, we have a WINNER!! How crazy is this? Such a chance sighting - timing IS everything. Curly is out of her mind excited.

For those of you who don't know, Murr is in a show called 'Impractical Jokers'. He and his buddies challenge each other to do embarrassing things and then they follow the 'joker' with a hidden camera. For example: they send a guy into the grocery store and tell him to shop from other people's carts instead of the food available on the shelves. They see how many items he can take and get away with it. It is nonsense and silly. My kids LOVE this show. It is on 24/7 because they record it and watch it whenever they want. Murray just so happens to be Curly's favorite. If you don't know who he is, I bet your kids will know.

I didn't have a clue, but read Kari's comment. I've never watched the show, but how cool is it that you bumped into him and you're a fan?? It's seren-freakin-dipity!!!

It will thrill my kids that so many readers did not know who he was, because they worry that the show will go off the air once the pranksters identity is well known. The show is funny, but dear God how I tire of it. When I emerge from the study after emailing or blogging or whatever and I want to plop down on the couch and watch something, I start yelling, 'Give me the remote - you guys have already seen this one a hundred times!' If course I did not share that truth with Murr. Timing is EVERYTHING. Like if we had blinked, we would have missed him. I see a Christmas present for Curly: t-shirt with the photo on it and words: 'I met Murray, what cool thing have you done?'