Making ourselves at home 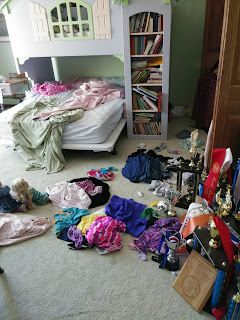 Our house - example of a not-so-pristine room.
There are other rooms in similar fashion, but I will spare you.

Monday morning I was up early trying to remember all of the last minute stuff that I was
planning to pack in my car to bring to my folks house.

My parents live less than 3 minutes from us.  Their house is pristine.  We're talking, Waterford floor lamps, spotless bathrooms, non-divot-ridden drywall, beautifully restored antique furniture, and perfect order.  I enjoy being in a space like this.  It's so foreign to me though, that walking back into our disaster area of a house (even without the construction zone theme that we currently have going on) causes me to flinch.  Big time.

I knew my mom wasn't excited about having us invade their peaceful solitude for 3 days.  Fortunately, my folks are very budget conscious, and they were adamant we stay with them rather than spend money on a hotel.

To try to make our presence tolerable I vowed to keep the squirts I sit for out of my folks' house until nap time.  I also brought the provisions we would need to feed the clan for three days.  This included a crock pot of chicken tortilla soup.  I prepared it knowing my dad would enjoy it.  My mom, on the other hand, is like a grown up stricken with a 2 year old's palette.  She doesn't eat anything spicy, forget beans, steers clear of onions, and tries nothing new.  Ever.

This is the reason I had never even tried a taco until I was in college.  My roomates enjoyed playing a little game called, 'Has Ernie ever tired . . . ?'

When nap time - aka the best time of day - hit, I sat down on the couch.  'I never sit down during nap time, because I have so much shit to do.  All of my shit is at my house,' I explained to my mom.  Five minutes later the phone rang.  It was the junior high.

Mini was throwing up.

I raced out the door to get her from school.  My folks were home, so I wasn't abandoning the sleeping tots or anything illegal.

Mini puked 10 times.  Then diarrhea hit.  It was a nightmare.  My dad has a compromised immune system because of leukemia.  We weren't supposed to invite a nasty stomach bug into their house.  Had the construction gone as originally planned (I am learning that a job like this sticking to a predetermined schedule is as likely as pigs flying) then the floors would've been done while we were out of town on one of our many long weekends away over the summer.

This is a photo of Mini after puking all night in a hotel a few years ago.  I texted it to Coach to share the experrience with him. This time I didn't bother to take photos.  She was too coherent.  That would've just been cruel.

Here I was worried that we might stain a carpet or leave a fingerprint on a wall.  Silly me.

Email ThisBlogThis!Share to TwitterShare to FacebookShare to Pinterest
Labels: moving in with folks, palette, pristine, puke