Big Bird's bottom portion is an old round laundry basket turned upside down.  I cut a hole in the bottom of the basket.  The end result is jagged, hard-plastic.  This has never been an issue, because previous wearers of the bird -including Curly- were so tiny that it didn't come close to touching their waistline.

I hugged Curly and suggested that she just wear the Goldilocks apron that I made for her for the dancing competition.  I was super relieved that I thought to pack that.  She admitted that her friends were looking forward to her wearing Big Bird.  I kept reminding her that she had already worn Big Bird anyway.  She sobbed, 'I'm sorry that I like your costumes so much!' 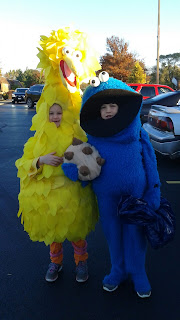 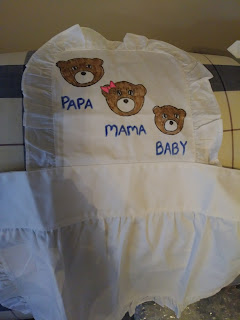 This is Curly wearing the costume back in 2nd grade.  Reg is Cookie.  And the apron - it wasn't quite done.  I added iron on letters on the skirt so it says:  I 💗 porridge.

That was it.  I may not have pulled a recent, costume-centric all-nighter, but I would not have my youngest disappointed on Halloween.  The guilt was too much.  Too many older siblings had their costume dreams come true.  The often over-looked middle child in me couldn't stand by and watch this happen.

I told her we were going to try to squeeze her into it again.  This time I forced the laundry basket opening over her rump.  Once it was on, it seemed to be OK.  The circumference of her waist was smaller than that of her dairy-aire.  I reached under and pulled her sweatshirt down to form a buffer between the rough edges of the plastic and her waist.  We got the top on with a bit of a struggle.  The upside down cereal bowl (I'm revealing all of my secrets here - maybe I should write a post entitled 'How to sew a Big Bird costume without a pattern by only using common household objects) that needs to rest on her head to support the styrofoam cone of Big's neck was hard for her to cram onto her head.  There just wasn't space under it for a tall costume wearer.

She was in!  She kept muttering, 'It's OK, I'll just be Goldilocks.'  What?  Was she in pain?  This was happening, damn it.  Why the long face still?  We discussed what her day would be like in the bird getup.  I had given up home of getting her to school on time anyway.  She wouldn't be able to sit down or go to the bathroom.  I promised her that if an emergent bathroom issue arose, she could call me and I could drive over to the school.  If need be, she could probably get the costume off without issue.  It just might be hard to get it back on.  Again, I was willing to drive over.  My folks would be around so I wouldn't have to drag the tots.

She started to perk up.  I took her into the bathroom and with some interesting maneuvering she was able to pee one last time.  I handled the wiping duty.  She was going to keep the bottom of the costume on in the great white (my van) and carry the top piece with her.

Here she is gettin gin the great white - resting a butt cheek on the edge of the seat.

After school Curly took the bus directly to her friend's house to go trick or treating (leaving Big Bird at her friend's house and dressing as Goldi).  She said it was hard to walk down the isle on the bus because the costume wouldn't really fit.  She hadn't gone to the bathroom all day.

She admitted to me later that towards the end of the school day she was tooting quite a bit.  Her best friend whispered to her, 'I think you need to go to the bathroom, Curly.'  Ah, what are friends for, but to impress with your costume and then pollute the air they breathe.

Big Bird will now join the cast of characters that my children have outgrown.  They will of course take up real estate in the storage room as they await the perfect sized grandkids.
Posted by Ernie at 1:36 PM

Those costumes are FANTASTIC! No wonder she wanted to go as Big Bird again! I have to commend her for not going to the bathroom all day. This old bladder is very impressed and a little jealous! I can't even make it through the night.