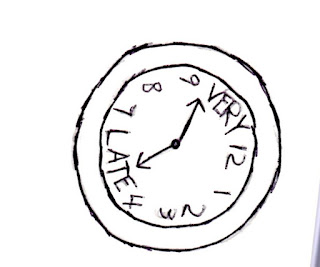 When I woke up on Friday, I anticipated my aching body to be my only issue.  Although I've never run a marathon, I suspect that the resulting soreness after baking 33 dozen cookies in one day produced a similar effect.

I crept downstairs on what should be a glorious day for me.  Friday is the only weekday that I do not babysit.  With a long list of tasks I hoped to accomplish poised on the counter-top where I could easily consult it or add to it, I prepared lunches for most of the kids.  The night before Eddie had visited me in my prison, I mean my kitchen.  He complained that he was staying up too late to study for upcoming finals because he had to drive around and deliver the pizza bread for his basketball team's fundraiser.  Making his lunch the night before seemed to make sense, but he really just wanted to go to bed.  Glancing around at the counter-tops covered in baking sheets, ingredients, and stacks of cookies, I waved him off to bed agreeing to help him with his lunch the next morning.

Tank shuffled into the room as I sliced up apples.  'My throat hurts so much,' he moaned.  Refusing to accept that my well planned day of important holiday chores could already falter, I made my tall 14 year old kneel down in the light so I could look into his throat.  It was red.  No visible white bumps.  'OK, I'll call and schedule a throat culture with the nurses this morning.'  I wrapped up the lunches, pulled Curly out of bed, and rushed her thru breakfast.  A moment later I reminded Reggie to finish his lunch and empty the silverware tray in the dishwasher while I drove Eddie to school. 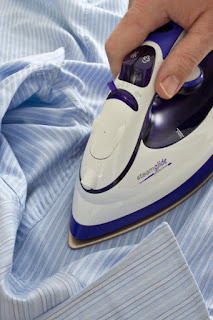 In the middle of my baking frenzy the day before, Laddie arrived home from college.  In order for him to drive to his winter break job interview Friday at 11am, I offered to drive Eddie to school to free up an available car.  Before Ed and I could hustle out to the car, I ordered him to heat up the iron in the upstairs laundry room.

Since today was his first home game, he needed to wear a shirt and tie to school.  Knee deep in a cloud of flour the night before, I offered Eddie an early Christmas present shirt that hadn't been wrapped yet.  It didn't look great with the tie he selected, so in the morning I reached back into the pile of unwrapped gifts 'hidden' in my closet.  Yes, this shirt would be better - Eddie agreed.

Once it was pressed, I traded it for his pair of pants that needed to be pressed.  This 'perfect' pair of khaki-like jeans had just discovered by Ed on Laddie's closet floor.  They were now Eddie's size.  There was a bit of food caked on them and they were rolled up in a ball, so they needed some attention.

Note to self:  make the kids actually go thru their closets and pull out the items that don't fit them before I invest in new clothes!  I tried to make mental notes without physically mumbling to myself, because one morning last week as I reminded myself what I needed to do - Tank stared at me from across the kitchen.  'Please stop talking to yourself.  You're scaring me.'

I was midway thru the first pant leg - ironing, then pausing to moisten the dried food before I  scraped at it, and then finally ironing some more - when I kicked myself for promising to iron his damn clothes.

Note to self:  make this second son more accountable for his own stuff.  Eddie reached for the tie that matched the better shirt.  'Nope, I can't wear that.  I don't know how to tie a tie.'  Oh for God's sake.  Have a male teacher tie it at school.  Nope.  Deal breaker.  Eddie said he wouldn't have time to beg a favor off a teacher.  As a stream of foul words escaped my mouth, I reached for the original shirt and quickly pressed it so that Eddie could go to school wearing the lame, already-knotted tie. 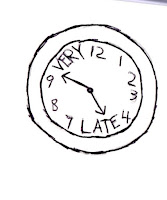 With Reggie eating another round of breakfast, Curly on the bus, Tank refusing to eat because of his throat pain, Laddie still in bed, I yelled up the stairs to wake up Mini before I called brief instructions to Reg.  'Get in the car, Ed!' I hollered over my shoulder.

I pointed angrily at the clock in the minivan.  Eddie would never make it to school on time.  Note to self:  my speeding days are behind me - not worth getting another ticket.  I wouldn't be making up an excuse and calling the attendance office.  Everyone needs to grow up at some point.

On our way to the school, I called the doctor's office and requested a throat culture.  I felt strongly it would be negative, but decided we better rule it out.  The receptionist told me to expect a call from the nurses.

Back home, I directed the remaining kids to get in the car so that I could drop them at school.  The junior high kids normally walk the 5 blocks to school, but the temperatures were dangerously low.  That's when I noticed that Tank wasn't the least bit prepared to go to school.  He heard 'throat culture' and translated it into:  no need to dress or pack a lunch or wear socks or brush teeth or ANYTHING!  I started to come unglued.  'GET READY FOR SCHOOL!' I screamed.

The two things I planned to knock off of my growing 'to do' list that morning included a scheduled, annual mammogram and a workout.  Not an overly exciting morning off, but I kept looking at the clock knowing that I needed to stay on track if I wanted to get to the mall that afternoon.

I phoned the school and let them know that Tank would arrive late assuming his throat culture was negative.  Mini and Reg hopped out of the car, and Mini admitted that she forgot the important paperwork that she needed to turn into the school office for me to register Tank for high school.  I groaned.

With Tank still in the car, I drove home from the school parking lot.  I dialed the doctor's office again.  A nurse got on the phone and informed me that they couldn't see Tank until around noon.  With six kids, I've been down the throat culture path before.  Being put off until midday was a first.  Foiled!  I told my 8th grader, whose only symptom was a sore throat, to run into the house and get the envelope for school.  He came out with the envelope, Molly's forgotten lunch, and some negative descriptive words about his sister.  Takes a forgetful sibling to know one.  I sighed.  'I'm dropping you off at school until they can do a throat culture later,' I shared before I drove BACK to school AGAIN!

With school age kids all dropped off at the appropriate building, the house seemed quiet.  Disturbingly destroyed, but quiet.  Laddie was still in bed.  I had a few spare minutes before I needed to leave for my mammogram.  I started to load the dishwasher.  Eddie texted me.  He wanted me to check on the remaining pizza breads that he hadn't yet delivered.  They were in the backseat of my minivan.

I expected to see a few small boxes.  Instead there were over a dozen pizza bread boxes that I now needed to deal with.  The temperatures promised to warm up slightly and I didn't know if the pizzas would thaw in the car.  I raced inside and rearranged things in my kitchen freezer.  This fun chore included relocating the remaining cookies I had baked the night before into the garage.  Planting cookies in the garage made me nervous because of our mouse issue.

I reassured myself that the mice couldn't scamper up to this shelf before Eddie came home from school and distributed his wares thus freeing up the coveted space in my freezer.  Besides the mice were busy making themselves comfortable inside the house - specifically in the cabinet over the microwave.  Wait, was I really counting that fact as a positive? 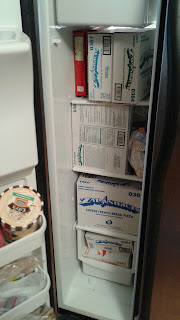 I shoved as many of the boxes into the freezer as possible before I lugged the remaining boxes to the basement freezer.  I knew the clock was ticking and my chances of arriving on time for my appointment were slipping away.  I sent Eddie a photo of the rescued pizza boxes with an angry message.  He texted back that he didn't deliver the rest of the pizzas the night before because he really needed to study.

Note to self:  email the basketball coach and suggest a thousand other fundraising ideas.  Who asks high school students to sell large quantities of pizza bread, expects them to be stored in the student's freezer just prior to the holidays, and requires the players to deliver their product a few days before final exams?

I woke Lad up before I bolted out the door.  'Get up!  I don't want you to miss your interview,' I called into his room.  Laddie's interview wasn't for a few hours, but college kids have been known to sleep half of a day away.  Not on my watch!

Mammogram, check.  Cookie delivery to a friend's doorstep with a Merry Christmas wish, check.  Three pizza breads dropped off at Coach's work place and stored in the freezer for the employees who ordered them, check.  Only slightly late for my workout class, check.