After organizing recent purchases at home, I hauled a few shopping bags of boxes back into my favorite department store to cash in on the complimentary gift wrap.  While I waited for the store's elves to wrap my gifts, I continued shopping -mentally checking names off of my lengthy 'to buy for' list.  Feeling slightly indecisive, I chose three different items of clothing for my Mom and decided to let Mini and Curly help me narrow down which one to give her.

With Mom's potential gift options tucked under my arm, I wandered into a section of my favorite department store where I often find clothing for myself.  In no time at all, I was waiting in line to buy a couple of things for me.  After years of suffering through the disappointment of allowing Coach to shop for me, I removed that chore from his list of holiday responsibilities.  The Christmas experience is so much more pleasant minus my need to feign excitement over a gift made in poor choice.  Before you rush to judge me as a demanding woman with impossibly high standards, allow me to share a few of the 'gifts' that my husband once bestowed on me. 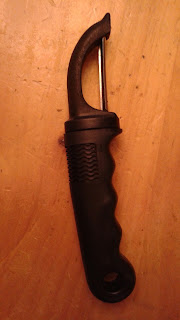 There was the year he carefully selected a potato peeler.  Just for me.  The cushy handle sealed the deal.  He had heard me complain that the metal one I typically used hurt my hand after prolonged use.  Nothing says love like a comfortable potato peeler handle that aids a spouse in slaving away in the kitchen.  Ah, the gift that keeps on giving.

One year I opened a pair of flannel pajama bottoms with the word 'Irish' sewn in large letters on one leg.  Again - Coach's attention to my comfort was impressive.  The one-size-fits-most label assured him that it would fit my size 6 frame.  Safe bet. 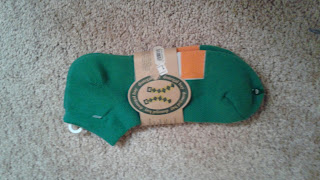 The flannel bottoms came from an Irish Imports store where he gravitated year after year.  There was a pair of socks that are still in my drawer with the tags on them.  A Belleek frame was a beautiful gift.  He even had my sister snap a photo of he and the handful of children we had at the time, so as an added surprise the picture inserted included our family . . . without me.  After receiving several frames as baby gifts and baptismal gifts, there wasn't much room on our end tables for another frame, but the gift was definitely more precious that the flannel bottoms.  One year for either Christmas or my December 30th birthday, he gifted me a pretty Irish charm for my necklace.  It was a sweet gift even though I already had a few other Irish type charms available in my jewelry box.  Eventually, I suggested that he abandon the Irish Imports store.  Been there, done that.

I give him points for the Huffy bike he bought me from K-Mart one year and managed to keep hidden until Christmas morning.  While I rode the bike a handful of times, we were blessed with too many small children to make family bike rides a manageable activity.  Besides, I was frequently pregnant and balancing my oversized self on two wheels was out of the question.  The child's bike seat I gave Coach one year for Father's day ended up being sold at our garage sale years later for a similar reason.  With more than one kid unable to ride a bike, who would we buckle into the seat and who would we leave at home?  These bike related gifts seemed practical at the time, but we were more inclined to keep both feet on the ground and push a stroller or two.

A few times he bought me music CD's that he knew I loved.  He probably should've kept to that equation, since he knew it worked.

When 2005 rolled around, Coach made a critical shopping error.  He allowed his patients' suggestions to dictate what he purchased for me.  A busy father of 4 with number 5 due to arrive shortly after Christmas meant that he needed all of the help that he could get.  He worked long hours, and he grabbed a chance to run to a store while he and the three boys were visiting his parents in Florida for a long weekend.  Mini stayed home with me, because I was too pregnant to travel.

Unfortunately on December 10th, my cousin, a young mother of three, was tragically killed in a car accident a few days before Coach and the boys departed for Florida.  Mini, not quite two years old, hugged me tightly that weekend at the wake and funeral as I sobbed uncontrollably.  Part of me couldn't believe that Coach still got on that plane knowing I would be burrying my cousin while he chilled out in Florida with his folks and our three boys.

Imagine my shock that emotionally charged Christmas when I opened a book titled:


Happy Housewives: I Was a Whining, Miserable, Desperate Housewife--But I Finally Snapped Out of It...You Can, Too! 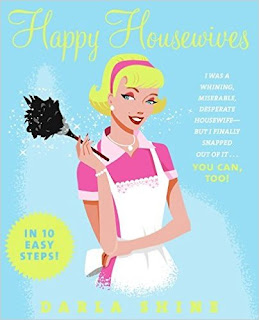 A few smaller books were wrapped separately.  These pocket self-help books included tips on how to pull yourself up and dust yourself off when the going gets tough.  I wasn't amused that he misunderstood my exhaustion and frustrations with our busy household which were complicated by his long hours.

After a few minutes paging through the horrible housewife book, I knew that Coach hadn't even cracked the cover.  I shared a few of this woman's tips with him from across the living room strewn with wrapping paper, new toys, and excited toddlers.  I could barely catch my breath as I angrily read aloud from the paragraphs offering suggestions on how to assure that you have an orgasm.  I threatened to copy those descriptive pages and drop them in the mail to his mother, so she would know how thoughtful his purchase was.

Coach shrugged sheepishly and explained the role his patient had played in eliminating the lengthy search for the perfect gift.  'He said it was hilarious,' Coach insisted.  I wasn't laughing.  The book disappeared from my desk a few days later, because he wisely chose to return it.

So now, I buy, I wrap, I label, and I act surprised when I rip off the wrapping paper to my gift.  It may sound anti-climatic, but in the end it keeps Coach out of seriously hot water!