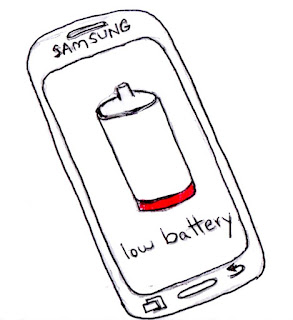 Driving home from my workout, I called Laddie to see if he was done with the job interview.  Although I asked him several times the day before where he needed to go, I never got a definitive answer- so I wasn't convinced that he would be home.

He was home.  'Guess what happened to me!?' he shouted into the phone in an irritated tone as if he had been wronged.  Before I could make an educated guess, he offered an answer that made me breathe a heavy sigh. 'My phone died on the way there, so I couldn't go because I didn't know where I was going.'

He assured me that his phone was at 100% when he left the house after I asked the obvious question:  'Why is your phone always out of battery?'  Damn, how I wish his college offered a class in honesty, perhaps with a 'you-can-fool-some-of-the-people-some-of-the-time . . .' or 'who-do-you-think-you-are-fooling' theme.  In a more calm voice, he shared that he had already rescheduled the interview for the next morning at 8:00 am.  At a loss for words, I told him I'd be home in a few minutes.
It was no great surprise that he had assumed the position:  reclined on the basement couch playing Xbox.  I realized that if I intended to take a shower before Tank's throat culture, then we were going to be a bit late.  'Do me a favor Lad, drive up to school in about 8 minutes and pick up Tank for me while I'm in the shower.  I'm running late to get him to the doctor,' I called down the stairs.  'Sure,' he agreed.

A fun fact about me, I can typically be showered, dressed, and ready to go somewhere in 12 minutes or less.  Wearing very little make up and sporting a no fuss hairdo eliminates excess prep time.  With six kids to keep up with, a leisurely bathroom routine is a luxury I can't afford.  Besides, I wouldn't know what to do with most makeup available on the market today.  Oh how I long for beautiful, long, thick, shiny hair that would keep me chained to a hair dryer and additional hair care products, but my follicles are beauty-impaired.  Sad, but true.

Racing down the stairs less than 12 minutes later with damp hair and fresh socks in my hand, I began calling for the two sons that I believed should be home by now.  After a slight pause, Lad hollered up from the basement, 'Oh, I didn't get him yet.  I didn't know when it was 8 minutes.'

Made perfect sense.  Why would a college kid with a video controller jammed into his hands and a phone connected to a charger be able to surmise when 8 minutes had passed.  Perfect.

I stomped out of the house to pick up Tank myself.  While I waited for him in the school office, I explained to the confused office staff that while I had taken the time to call and alert them that Lad would be the one to pick up Tank - he was unable to decipher when 8 minutes had ticked away while he was glued to the Xbox.  When Tank showed up, they were still chuckling.  If I was ever going to hit the stand-up comedy circuit, I would just have to convince myself that the audience was a doctor's office or a school's front office.  It's where my over-sharing about our family nonsense scores the most laughs.

I apologized profusely to the receptionist at the doctor's office for our tardiness once again describing an 18 year old with no concept of time thanks in part to a video game.  Again, all available staff members tuned in to my spiel, and shook with laughter until Tank and I were led back to an exam room.

While Mr. Sore Throat and I sat waiting 5 minutes for the test to be complete, it dawned on me that driving Ed to school that hectic morning wasn't necessary after all.  Laddie didn't need a car if he was going to just sit and perfect his gaming capabilities.  My blood was boiling because I had called over my shoulder down the basement stairs, 'Go ahead and fold the laundry in the basket in the laundry room.'  My directive was met with a simple, 'I don't do laundry.'

On top of that, Laddie admitted that he hadn't actually called the company trying to interview him and explained his failed phone battery and subsequent lack of GPS issue.  He had simply gone online and set himself up with a whole new interview the next morning.  I questioned how impressed they would be when they realized that he had ditched an interview the day before.  My suggestion that he get in touch with someone was met with an eye roll.

So much to ponder in this lengthy 5 minutes exam room wait.  The nurse appeared and announced that T was positive for strep.  Awesome.  I had never sent a kid to school if I suspected that there was a legitimate illness.  I had also never been told by the doctor's office that they couldn't squeeze a kid in for a throat culture in the morning before school.  Now I called the school to let them know that Tank wouldn't be returning and that he did actually have strep.

Like any bad material that flops, my bad news was met with a groan instead of my usual chuckles.  Thankfully, I wasn't appearing live in their office where I could be heckled.

The doctor's office phone lines weren't working, so they handed me a paper script instead of calling it in to the pharmacy themselves.  Tank and I drove to the pharmacy and dropped it off.  We got home and I informed Lad that he would need to pick up T's prescription in 25 minutes.  I planned to move forward with my shopping agenda, which meant that he needed to pick up Eddie from high school at 3:00 and the junior high kids at 3:30.  Before he headed to the high school, he needed to grab the three thorn-in-my-side pizza breads that Eddie needed to deliver to teachers after school. 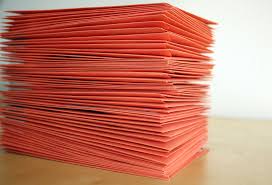 I didn't bother to ask for help adhering stamps to my stack of 215 Christmas cards.  I would bolt to the mall, drop the cards off at the post office on my way, and not look back.  From his perch on the basement couch, Lad heard me walking across the kitchen floor as I organized myself to leave for the mall.  'I know, I know- I'm going to the pharmacy now,' he called.  I hadn't even noticed the time as I was absorbed in my one-woman assembly line of card stuffing and stamping.  When he returned with the prescription, I reminded him that if he intended to workout he had to time himself so that he could collect Ed at 3:00 lugging along the all-important pizza breads.

I'm not sure why I expected Laddie to be able to manage his time, if he couldn't even tell when 8 minutes had passed.  With a quick glance to the clock, Laddie slipped into freak-out mode.  'No way, I can't do this.  Eddie has to get his own ride home!  I won't have time to workout now,' he ranted at me as if this was the first time he had learned that he was responsible to chauffeur siblings around.

I stood dumbfounded in my kitchen, but managed not to lose my cool.  'You ARE picking up Eddie.  You ARE his ride.  He doesn't have a car because you needed it for the interview you failed to attend. He NEEDS to have the pizzas to deliver to the three teachers who ordered from him.  You knew all this, yet you elected to sit and play video games all day.  If you don't have enough time to workout, that is your problem.'

Although I had carefully written on a neon colored post-it note which three flavors of pizza bread he needed to take to school, his panic-mode status caused him to grab randomly at a plethora of pizza bread boxes in the freezer.  Boxes tumbled on the floor as he attempted to carry a dozen or more of them.  'You only need the three flavors that I already wrote out for you,' I reminded him.

Grabbing my box full of stamped cards, I headed for the door.  I always love a trip to the mall, but today's venture had become a do-or-die-trying mission.  I refused to stand around and witness anymore of my oldest kid's crazy antics.  'Take your antibiotic,' I called back to Tank as I marched out the door.
Posted by Ernie at 5:09 AM