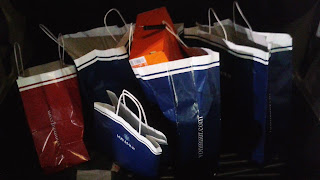 Once I wrapped things up at the mall - or to be more specific, once the little worker bees at my favorite department store wrapped up my things at the mall - I headed home.  Phone calls from my offspring, who had arrived home from school, had begun to hit the airwaves in rapid succession.

As I struggled to my car with multiple shopping bags, I fielded questions like, 'I'm taking the car to my game, right?  Can you tell Lad that, because he thinks he has the car?' and 'Why did we have to walk home?' and the garden variety:  'When are you coming home?'  I later learned that Laddie didn't make it back to pick up the younger kids from junior high, because it took Eddie too long to track down the teachers who needed their pizza breads.  I hadn't factored pizza delivery into the equation when I instructed Laddie to pick up three kids after he had gotten Eddie.

Thanks to a heavy snowfall, I progressed homeward at a snail's pace.  Eddie's sophomore basketball game was a home game, so I called home and instructed Coach what leftover options he could heat up for dinner.  I knew that by the time I got home we would be pressed for time.

We were late for Eddie's game.  As we watched him play I reminded Coach that one of us was assigned concession duty during the varsity competition following Ed's game.  I crossed my fingers that Coach would volunteer to handle our shift.  My body hadn't recovered from being on my feet all day the day before when I mass produced 33 dozen cookies.

When Ed's game ended, neither of us had budged on our position to avoid working the concession stand.  Deep down I felt that it was Coach's turn, because I had manned our concession duty the year before.  Coach was still experiencing discomfort after a long, painful dental procedure a few days prior to replace a bridge destroyed when he missed a pitch from Reggie back in May.  That information, coupled with the fact that I could rely on my former Burger King experience, led me to accept the concession challenge.  Coach shuttled the younger kids home, and I assumed the on-my-feet-for-a-couple-of-hours position at the table outside the gym doors. 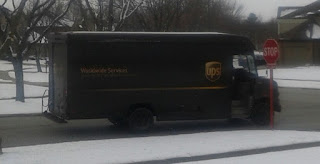 The next morning I crossed my fingers that Laddie would be successful in attending his 8 am interview as I drove to my workout class.  After the class I noticed a text message from Lad.  He needed to return to the interview site at 11 am.  In order to accept the job, he would need to show up with several forms of ID.  He wanted his social security number, his passport, and his birth certificate.

I was momentarily confused, and couldn't help but wonder if I had mixed up my acronyms.  Had he interviewed with the FBI instead of UPS?  On my way to my car, I literally bumped into him.  'What's the deal?' I asked him.  I wondered if I could drive his 50 forms of ID and perhaps a blood sample to the UPS location in his place, because I reminded him that he had a very important doctor appointment at 11 am.

It turns out that I wasn't given all of the information.  Shock.  He was going to squeeze in a quick workout before the orientation session that he was required to attend.  So, no - I couldn't just drop off his information.  Of course I realized that had he brought the required documents with him to the interview, he could've completed the orientation directly afterwards.  Now he would miss a doctor's appointment that was difficult to schedule and necessary for him to attend in order to get his ADD medication refilled before returning to school.  His carefree attitude got under my skin as I drove home.

I called Coach at work and revealed my suspicions that Laddie had received an email detailing what he needed to bring to the interview, but that he had most likely glossed over that important bit of information.  I also shared my disbelief that I had to go all the way home to retrieve the key for the safety deposit box at the bank, race over to the bank, snatch his birth certificate, and run it home before he left for orientation.

Coach told me that he would call Laddie and get a handle on the ID situation.  When Coach called me back, I was thrilled to know that Mr. I-screwed-everything-up-by-not-attending-the-original-interview-scheduled-for-the-day-before only needed a passport OR his birth certificate.  Not both.

Ah ha, I love it when the truth makes sense.  His passport was still at home from our summer travels, and I could easily write down his SS#.  An extra trip to the vault was avoided.  Incredible that it took an additional conversation with his father for the actual information to leak out.  I hoped that the doctor's office would squeeze him in during the week, and that they wouldn't charge us for the missed appointment. 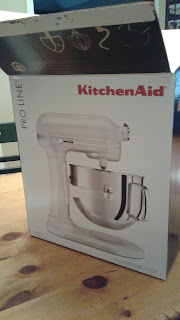 When I arrived home I practically tripped over an enormous box in the front hall.  The kids pointed out that the box had been delivered the day before.  Daddy had pulled it off of the front porch that morning.  On closer inspection, I realized that it was my new Kitchen Aid mixer.

This awesome new small appliance had been ordered Wed evening - by me, because remember - I do all my own shopping.  I was told it would take 5-7 days to arrive.  On Thursday, I plowed thru the dough of 33 dozen cookies because my other mixer was out of commission.  Now on Saturday the kids tell me that on Friday the mixer had arrived after all.  I wasn't sure if I should laugh or cry.