Christmas was fast approaching.  Crossing chores off of my list gave me a sense of satisfaction.  At times it seemed like the more I accomplished, the more that I added to the list.  With about a week to go, I at last felt like I had moved out of the 'overwhelmed' phase of Christmas.  I was nowhere near ready, but I had a somewhat firm idea of what I was planning to order and purchase for major gifts.  In years past, I typically consulted Coach on most of the 'biggies', but this year I chose to keep purchases to myself.


It hadn't started out that way.  Tank (aka Tetanka), who mows lawns and shovels driveways when he isn't caddying, wanted a snow blower.  I ran the idea of a used blower past Coach.  When he shook his head and failed to cough up any other suggestions, I decided to forge ahead unassisted.  This year he would be as surprised as the kids come Christmas morning.  Besides, it seemed like any discussions I introduced about my quest to keep to a budget, score good deals, and identify ideal gifts were largely ignored.  In addition to tuning out of the gift purchases, there were other indicators that proved that Coach and I prepared for Christmas in different ways.

Around mid-December Tank required a physical for basketball tryouts  . . . by the next day.  These damn physicals sneak up on me.  I swear I have everyone up to date for school or sports and then another one pops up that somehow fell off of my radar.  With no available appointments at our pediatrician, we were limited to a nearby minute clinic.  I assumed Coach would handle the physical while I dropped the girls at Irish dancing class 25 minutes away.  Then he informed me that he had hoped to attend a confession service at Church that night and the physical would interfere.

I dropped the girls off at dancing and raced back to relieve him from the waiting room at the doc in a box.  He drove to church a few minutes before I arrived, but told the disenchanted receptionist that I would arrive shortly to take over.   I wondered what it would be like if I was able to share the Christmas responsibilities and focus on what mattered.  How lovely that he had time to attend an extra church service while I only had time to shop, wrap, address cards, lick envelopes, run to the post office, order online, bake, decorate, dig out Christmas outfits for the crew, create excellent gift hiding spots, and check it all off of my list. I prayed that God would forgive me.


One evening Mini entered the study unannounced and begged me to take the available, non-driving kids to Target where they could shop for their secret Santa sibling.  I quickly closed out of the Craigslist window where I was searching for used American Girl Dolls, and agreed that this night would be our last opportunity.  With other things to accomplish I urged the youngest four to grab their funds, zip on a coat, and hop in the car.  Three kids scattered like salt on ice when we entered the store.  Curly was glued to my side whispering to me that she was always stuck shopping for someone 'bad.'

I easily translated her 'bad' terminology to describe a difficult kid to shop for, not necessarily a kid with a behavior problem.  Last year she ended up shopping for Laddie and this year she had picked Eddie's name from the hat.  I tried to instill some confidence in her that I could help her select a gift for him, but I had few ideas myself.  On the drive over we had elected to increase the spending amount from $10 to $15.  Still, there wasn't much at Target in that price range that Eddie would get excited about. 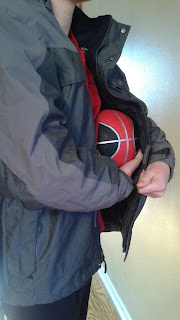 As she and I tossed out ideas, we rounded the corner just in time to spot Tank shoving a small sized basketball inside his coat.  With his eyes darting back and forth suspiciously, he was a dead ringer for a shop lifter.  Worried that he was about to be snagged by store security, I called out to him.  'Hey, Tank, you can't do that!  There's no need to end up in juvie just to keep your secret Santa gift on the down low!'  An elderly couple pushing a cart next to mine chuckled as they listened to me explain to him my valid concerns regarding concealing an un-purchased gift from a lurking sibling.  That was a close call. 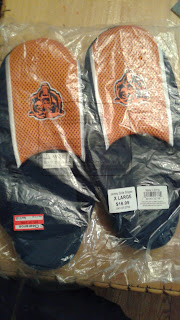 Now that Christmas has passed, I can share that every kid was excited about his or her sibling gift, except Eddie.  Laddie didn't even seem to mind the somewhat insulting Hulk shirt that Eddie got him in addition to the awesome pair of compression shorts for his workouts.  Ed couldn't resist the Hulk tee since the muscular green hero is pushing thru a brick wall with the caption, 'I'm kind of a big deal.'  Laddie picked out a knock-off American Girl doll outfit at Target for Mini.  The fact that Lad managed to shop this year is a big improvement from last year when he wrapped up a recycled gift for Curly (See: A Memory Making Christmas Re-Gift from December 2015 for those fun details).  Reggie received a Bulls baseball hat that he now only removes from his head long enough to wash his hair.  Reggie still got the small basketball that was hidden momentarily under Tank's coat, but I gave it to him so that T could give him the hat.  Mini stumbled upon a perfect 'Lego Friends' item for Curly, and T was excited to open Star Wars action figures from Reggie.  Eddie secretly wishes he could return the Chicago Bears slippers that Curly hoped he'd be excited about.  One flopped gift out of six ain't bad!