Do you know where your toothbrush is?


Coach and I both have two older sisters and two younger brothers.  Weird, but true.  My middle child placement impacted me . . . big time.  Coach - not so much.  He was the first born son.  I was the third daughter to arrive before my folks' first born son (aka the second coming).

I just wanted to throw the birth order tidbit out there, but really it's irrelevant to this story.  The point is that my husband and I both grew up in a house surrounded by a small army of siblings who shared one 'kid' bathroom.  Neither Coach or myself ever recall experiencing a disgusting issue with toothbrushes.  Ever.


In my childhood house, we utilized a ceramic toothbrush holder.  If memory serves, and it usually does, we owned a coordinating ceramic cup.  These stylish fixtures were the same pastel blue shade as the fluffy bathroom rugs that were positioned in front of the toilet and the sink.  I'm assuming Coach's family used a similar, mainstream apparatus to hold their teeth cleaning utensils.


My children haven't been deprived of this little luxury.  I bought a toothbrush 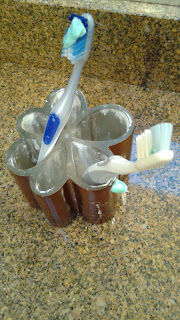 holder and placed it on their counter-top years ago.  I carefully chose one that held 6 brushes.  The build up of hardened toothpaste serves as evidence that the children have utilized it over the years.  Recently it has come to my attention that some of my offspring avoid storing their toothbrush in it.  (This picture of my kids holder features two brushes - one loaded with toothpaste - I don't think I even want to know . . . did someone forget to use it?  Note there are several brushes not stored here!)

Last year, I cleaned out the bottom drawer in the bathroom and tossed out a toothbrush that I assumed was an old forgotten one.  It appeared to be misplaced when I discovered it wedged between new rolls of toilet paper.  That night I heard Eddie yelling at his siblings accusing them of moving his toothbrush. 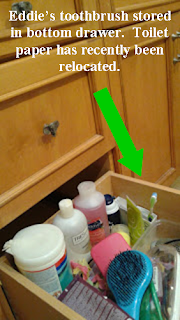 That's when it became clear that Eddie refused to leave his toothbrush on the counter-top unprotected.  Holder be damned.  It wasn't safe enough.  Instead he kept it out of sight and hidden in the bottom drawer of the bathroom vanity where the spare rolls of toilet paper are stocked.  He insisted that this tactic was born after he suspected that another sibling occasionally used his toothbrush.  Gross.  I assumed his theory was unfounded.  Had to be.  Who would use someone's toothbrush?

I called Eddie out for being a germ-a-phob and opened a new toothbrush for him.

Recently Reggie was invited to sleepover at his friend's house.  That night when Curly went to bed, she couldn't find her toothbrush.  I'm no detective, but I quickly surmised that Reggie brought Curly's toothbrush in his overnight bag.  Unbeknown to either of them, they had been sharing a toothbrush.  Do they brush their teeth in the dark?

There have been a few other issues.  Mini was concerned once that Tetanka was using her toothbrush.  Honestly, I didn't care that T might have borrowed someone's oral hygiene tool.  I was simply relieved that T was brushing his teeth AT ALL.  Self care is not his strong suit.  OK, OK, it's still . . . gross!

As my father used to say when we were kids, 'This kid may not be as dumb as he looks.'  Perhaps Eddie's intelligence was revealed in this toothbrush hiding habit.

But why?  Why do our offspring struggle to know which toothbrush belongs to them?  Is it because they come home from the dentist with similarly colored brushes?  Not enough colors in the rainbow?  I used to pay more attention to these things - assign a kid a toothbrush.  Now the kids are older, so I assumed they could handle differentiating their stuff.  I tend to leave micromanaging to neurotic moms.  I'm guessing that kids living with neurotic moms manage to contain their germs better.

I've made attempts to get kids to ditch old brushes.  Somehow they skip the all important step of tossing out the old.  Maybe in their excitement to begin using a new one, they fail to identify the old one.  I have drawers of abandoned, barely used toothbrushes to prove it.

I honestly don't know where they come from.  Sleepovers - when their 'oops, I forgot to pack my toothbrush even though my mom called upstairs ten times and told me to bring it' approach scores them a  new one from their friend's house?  I am certainly not purchasing a new supply at the store each week.

The concept of opening a fresh toothbrush, but leaving the old one stuffed in a bathroom drawer is foreign to me.  Perhaps it is my fault for not standing guard when kids rotate from old to new.  I don't remember my mom conducting an official farewell ceremony or checking each of us off for giving the ancient, toothpaste-caked, worn-down-bristle brush the heave-ho.  Her house definitely had more order.

I'm not sure why my house is more disorganized than the house I grew up in.  Maybe we can blame it on birth order.  My mom and Coach's mom delivered girls before their sons.  Little, devoted, neat freak daughters.  I'm referring to my sisters here.  I believe that the neat-freak gene became watered down in our DNA with every subsequent birth.  On more than one occasion, my Mom has noticed the disorder in my home.  She has commented on this discrepancy in comparison to my childhood home.  I shared my theory with her once.  I birthed boys in rapid succession.  Those boys have set the tone for our home.  Filth, clutter, and dirty socks.

Just last week Coach had a mini panic attack after it became clear to him that someone used his toothbrush.  Curly usually brushes her teeth in the first floor bathroom.  Her chances of making it to the bus on time multiply dramatically if we eliminate her need to race upstairs to clean her teeth.  Because Coach leaves the house before 5 am, he also keeps a toothbrush in a bathroom drawer on the first floor.  I can't complain about the toothpaste smears in the first floor bathroom sink for a few reasons.  Not only do I dread a missed bus, but I appreciate that Coach's mission is to scoot out of the house without re-entering our room to attend to his oral health and risk waking me up needlessly.

All family members have learned the hard way that waking me up prematurely is detrimental to their health.

Coach's discovery that he was generously - yet blindly- sharing his toothbrush, came immediately after he recovered from a 24 hour stomach bug.  Having just experienced the discomfort of vomiting and the inconvenience of rolling into a ball in bed all day left him envisioning our kids falling ill one after another.  Once again, I assumed he was incorrect.  'There are only two of you using that bathroom.  How could Mini forget which toothbrush was hers?'
Isn't it great that after all of the years of witnessing wacky kid shit, I still have every confidence in them that they aren't as clueless as we fear.  When will I learn?  Coach and Curly opened new toothbrushes and squared off on where in that bathroom they will store them.

While the kids continue to box one another out using the popular basketball defensive move as they attempt to hide their toothbrushes from one another, I just breathe a sigh of relief that no one else caught Coach's puke bug.
Posted by Ernie at 7:47 PM

I just saw something BRILLIANT at a friend's vacation house (only one bathroom) that I wish I had instituted way back when my kids were small: each kid had a little plastic bin that ALL his/her bathroom stuff went into: toothbrush, toothpaste, soap, whatever. The bins were stored on shelves in the vanity. SO SIMPLE. I want a do-over.