After years of struggling as a middle child, I discovered an escape route . . . that actually paid me money.

When I wasn't being picked on, excluded, or sneered at by my siblings during my formative preteen years, I could be found babysitting.  At long last, a group of people who not only accepted me - they often worshiped me.  My willingness to hang out at someone's house for hours on end proved to be quite lucrative.  Add to that my sense of responsibility, my playfulness, my dedication, my loyalty: and I was quite the babysitting commodity.

Over the years, I encountered many different types of people and situations thru my sitting services.  There were folks who paid me well, and some who didn't.  Some abodes were clean, and some were NOT.  Well stocked pantries satisfied my carefree ability to binge eat without even realizing it.  Ah, the metabolism of a 12 year old girl!  Other cupboards were so bare that I called home begging someone to ride a bike over with a paper plate heaped with dinner.

Once I reached high school and college age, I often connected with the young parents whose kids I cared for.  They'd stagger in from a late evening, and we'd continue chatting until the wee hours of the night.  I trusted them, bounced ideas off them, and sought their advice.  Most of all, I enjoyed them.  Looking back, I may have had a hand in raising their youngsters, but these parents were helping me learn to think for myself, be confident, and develop a strong sense of self.

There are exceptions to every rule.  As a junior high student, one woman tended to pay me in loose change.  I'd look at her blankly and wait for it to dawn on her that it might be a struggle for me to get home on my BIKE if I was weighed down with ten bucks in coins.  Had she not noticed that I arrived wearing shorts and a t-shirt minus deep pockets?  Duh.  I was a kid.

Perhaps I'm being too generous considering that she probably never actually paid me more the six big ones (in coins she collected from between her couch cushions).  My mother finally took it upon herself to call Gail up and inform her that the going rate for a sitter had increased since my sisters had launched their sitting careers a few short years before.  It was no longer socially acceptable to dole out a buck for each hour wasted, I mean spent, caring for her two, small, smelly children. 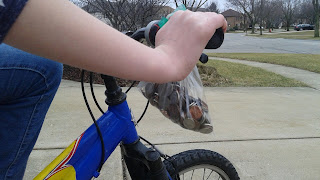 Mom shared the news with her without making her feel like the cheapskate that she was.  Mom had a knack for that kind of thing.  A solid chit-chatter, Mom chuckled here and there between a few quick anecdotes as she played with the long, curly phone cord.  As the point of her phone call approached, she gave me a quick wave of her hand from her comfy position on her bed.  With one leg bent across the bright yellow spread, the other foot tapped at the blue carpeted floor.  Her face flashed a fierce 'don't even think about distracting me here -I'm going to lay it on the line' glance.  I crouched on the carpet next to her bed.  No eye contact.  No busting out in that explosive, senseless laughter that always happens at church when you're supposed to be quiet.  Who can control themselves when a brother surprises you mid-prayer with a weird expression on his face?  It never failed.  Once I snorted a loud chortle out my nose, the laughs kept coming.  I dug my fingers into the thick carpet creating a temporary design as I listened to her launch into the, 'So, completely not your fault, but times they have changed.  My daughters are now earning more from other moms in the hood, so I figured you would want to stay competitive.'  Smooth, like baby butt cream.

Gail cornered me once.  Just as she was about to pay me.  She dangled the sandwich baggie chock full of coins in one hand.  This was part of the unfortunate pre ziplock era.  She leaned in a bit.  Creepy close.  My bike was right outside.  She was acting odd.  I should've just made a run for it.  'So,' she breathed with a smiley smirk on her face.  'Have you gotten your period yet?'  Weird!  To put in mildly.  Crossing a line.  Awkward.  I'm guessing that she was attempting to create a 'friendship' bond like those that blossomed naturally with some of the dynamic women that I sat for during my later high school and college years.  Maybe I would've gravitated towards her as a confidant or a buddy if her pantry had been stocked, or if her kids hadn't smelled bad, or if she hadn't sent me home struggling to keep my balance on my bike with the clunky bag of currency that left me leaning to one side.  I sped home that day at lightening speed - anxious to put some space between us.  I didn't want to talk about my period with my friends at school, my sisters, or my mom and certainly NOT Gail.  What was her deal?

Fortunately, I survived that embarrassing ordeal and stayed the course.  My ability to overlook the weirdest of people led me to accept countless sitting jobs and I earned a strong reputation and stacks of dollars . . . typically in the form of paper money!

Ha! I really enjoyed this one!