While I realize that this post is 'so last year', I insist on sharing more of my Christmas tales - this one featuring one of my shopping pitfalls.  Perhaps I will re-read this just
before next Christmas and vow not to head down a similar, slippery slope. 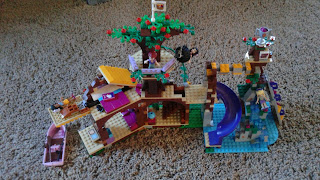 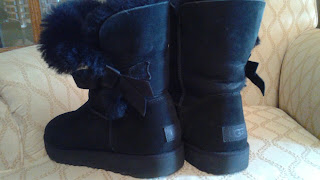 American Girl dolls as Christmas gifts hadn't cropped up on my radar this year, because the gifts I had already purchased for my young daughters were perfectly acceptable.  Curly longed for Lego Friends.  I even jogged back to the store to exchange the small sets I had already purchased for a larger box after overhearing her tell Laddie her specific wish for Santa to deliver the Tree House Lego Friend Set.  Mini would be overjoyed to receive her first pair of Uggs.  This pricey purchase was made possible by the return of a few articles of clothing with return labels in tact.  While the returns were ancient, the store thrilled me by accepting them back and producing gift cards that I used to offset the hefty Ugg price tag.

The girls and their best friends joined me for brunch at the American Girl restaurant a week before Christmas to celebrate Curly's birthday.  Now as a last minute and unnecessary gift idea, I investigated whether or not there were any used and reasonably priced American Girl dolls for sale on Craigslist.  I emailed a few sellers about potential dolls that I knew the girls would be excited about and waited for them to respond.  It was hard to find a few spare minutes without a kid bursting into the study where I was conducting my online search.


In order to kill two birds with one stone, I called a woman back from Craigslist while I stood in line to collect a small Lego item I ordered for in-store pick-up.  Very few people had returned my email inquiries.  If I couldn't secure two dolls from the girls' favorites list, then the plan would stall.  With poor phone reception, I struggled to hear the woman.  Her raspy voice forced me to question whether or not her doll was coming from a smoke free environment.  She insisted it was.  I felt her price was a bit high, but I only managed to get her to lower it by 10 bucks.  Had time been on my side, I would've called her bluff when she hinted that she had two other people interested in the doll.  I pretended that I needed to speak to my sin-free husband, who managed to attend a confession service at Church while I raced around like a crazy person securing gifts for EVERYONE on our list.  I told her I'd shoot her an email later that night to confirm whether or not I would drive out to her house and pick it up.

On December 22nd I put the three tots I was sitting for down for naps, and bolted for Tinley Park to an address that was about 33 minutes from my house.  My older kids, who had already started winter break, assumed the babysitting role for my young charges.  I told no one where I was headed and realized later if this American Doll seller was a serial killer who was plotting to slit my throat, then my whereabouts would be tough to trace.  During the entire drive I reminded myself not to buy the doll if it smelled bad.

I found the house with no problem.  The woman who opened the door was somewhat hunched over and appeared slightly deformed.  One of her eyes was angled out of the side of her head as if she were a direct descendant of Nemo's.  This misplaced eye was positioned higher on her head than her regular eye.  Since I was already focusing on trying not to stare, it took added concentration not to inhale the foul smell that permeated the home.   The doll looked fine.  I raised it up to my face to smell it, but realized it was impossible to pick up a scent in a house with such a strong, disgusting odor.  I wasn't convinced that the smell was a result of smoking.  Perhaps she dissected animals and stored their parts in formaldehyde.  It was THAT bad.

Moments later I found myself driving home with the undoubtedly smelly doll in my trunk under an old sweatshirt.  I scolded myself for not following my own do-not-buy-if-it-smells directions.  I tried to move forward.  I mentally checked 'doll pickup' off of my list, but felt my shoulders slump a bit as I added 'deodorize doll' to said list.  I hoped that Febreeze would be the answer.

The next morning at 6:20 am I drove even farther - practically to Indiana - to collect the other doll.  This one was in great shape with a more reasonable price tag.  Go figure.  Coach's family Christmas get together was that evening, so when I got home I grabbed the Febreeze and bathed Ms. Smelly Nelly doll in my bathroom.  Throwing an old towel in the corner of my closet, I laid Smelly on the towel to dry.  I busied myself with food preparations for the celebration that evening, but every time I ended up back in my bathroom I noted the awful smell lingering from the perfumed Febreeze.

We arrived late to the party, which was technically my fault.  I hadn't allowed enough time for me to handle every single step in departing from the house.  Silly me.  Instead the instructions and delegations I barked at other family members failed.  Mini loves to wrap presents, but when I asked her to wrap the gifts for Coach's side, she couldn't locate the tape.  I needed to stop cooking long enough to unearth the tape.  The frustrated search party that consisted of Coach and Mini were unable to find tape in the three locations that I had suggested, even though I discovered tape in all three places.

No one, translation:  me, had done a load of laundry in days.  The older boys failed to recognize that they had no clean clothes, not counting workout attire.  My dryer rarely completes a cycle by producing dry clothing.  At my command, Eddie ran upstairs at regular intervals to check for dampness, clean out the lint filter, and restart the dryer.

The Rocky Road Fudge bars that I made in advance managed to fall off my radar.  They were done, but just before we left I realized that I hadn't cut them into squares.  I wasn't bringing the entire batch.  Since they were gluten free, I planned to leave a few bars at home for me to bring to my parents' house for my eating pleasure on Christmas.  Coach couldn't find the Christmas charm that I laid out on the dining room table to adorn the coordinating plate that I was bringing the dessert on.  After I spent more time than I care to admit cutting the mushy bars and placing them on the plate, I dug around on the dining room table to find the ceramic Christmas tree.

Curly couldn't find her tights.  Whose belt could Eddie borrow?  He was banking on Santa bringing him a new one.  With half of the crew wearing damp pants, we finally filed into the car lugging the pretty dessert tray, a bag of wrapped gifts, and a huge pot of mashed potatoes buried in a beach towel in an attempt to keep them warm for the 45 minute drive.  Our tardy departure produced lots of grumbling aimed in my direction.  Seriously!

We got home at midnight.  Everyone dove into bed, except Laddie and I.  Laddie, who hates missing an opportunity to hang out with friends, grabbed his car keys.  I snuck Miss Smelly downstairs and perched in front of the computer to conduct a search on how to deal with a smelly American Girl Doll.  'Don't Febreeze it.'  Damn.  Wish I had read this post first.  There were different opinions.  Recognizing my time constraints, I chose the shampoo and conditioner option. 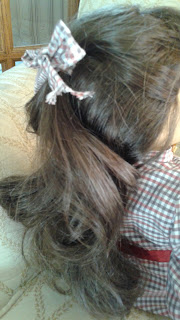 Laddie arrived home at about 12:45 am and stood staring at me as I was squeezing excess water from Miss Smelly's hair.  Her clothes received a scrubbing with Ivory dish soap.  I rubbed a baking soda mixture on her cloth body and then wiped it clean with a damp cloth.  I scrubbed her hard plastic arms, legs, and face with baby wipes.   Finally, I laid her out on the towel under my handing clothes in my closet to dry.  I arranged the two Pac 'n Play portable cribs in front of her, so if anyone dared to enter my closet, they wouldn't notice her.

The next morning was Christmas Eve.  I occasionally checked on Miss Smelly while I popped in and out of my closet organizing other hidden gifts to be wrapped.  A nap became an essential part of my pre-Christmas agenda.  Late that night after the kids were in bed, I dressed the mostly-dry doll in her freshly smelling outfit, fixed her wavy hair, and arranged her in a large white box with a big red ribbon just like her less smelly counterpart.  The girls were overjoyed.

While the girls enjoy American Girl dolls, I have maintained a limited awareness of the dolls, their cost, and their availability.  After I shared my used doll adventure with a friend, she asked me how much the doll would have cost new.  I stuttered out that I was under the impression that the doll was retired, but I had never bothered to investigate it.  I believed American Girl Dolls were simply over-priced.  This morning I checked online to see how much the doll that cost me so much time and energy would've cost if I had purchased it at the store.  My chin dropped open when I saw that for only another $25 I could've bought the damn doll new.  Ouch.  New Year's resolution:  after working to stick to a budget, don't panic and add extras to an already complete shopping list.  I have to wonder if I had included my spouse in my master plan, if his perspective would've steered me from this frustrating debacle.

You probably already know this, but you should check your dryer vent - it might be clogged with lint.

And I swear I spend half my waking December hours looking for tape.