Welcome to the latest installment of I'M NOT ONE TO COMPLAIN, BUT . . . the Arizona addition.

Not sure I mentioned my trip officially here, or just in comments. Last month, I bought flights for Curly and I to fly to Phoenix early July for the National Championships of Irish dancing.

I used frequent flyer miles and when I saw all our miles piled up, I thought WHY ARE WE LETTING IRISH DANCING DICTATE WHERE AND WHEN WE TRAVEL? DANG IT.

I looked at flights to Florida and reserved a few million different options that would expire in a few days, unless of course we decided to book them. I sent a screen shot of one of the flights to Coach with the caption:  WANNA GET AWAY?

Hell yes! Between the last several months dealing with Lad and a few other stressful situations, we were spent. We ended up selecting Arizona because the Florida flights were all in the middle of the day. Who wants to devote a whole day to travel when all ya got is a few days?

I juggled my babysitting people, so we  could leave on Friday and return at Monday after midnight. OK, technically Tuesday.

This trip promised to be different than our other weekend getaway trips that were tied to classes that Coach taught. Translation:  I wouldn't have hours during the day to do as I pleased before meeting him for dinner after his classes. We'd have lots of 'together' time. The night before we left, I asked him if he was bringing a book. He knows my agenda:  workout, hike, lay by the pool, read, eat out, nap. Not necessarily in that order. Yes, he had a book. And plans to sit in the shade while I soaked up the rays.

We waited 45 minutes in a long ass car rental line. Well, that sucked. The minute we were in the room, I was stripping. Don't worry, this is NOT THAT kind of a post. I dug my bathing suit out of my bag and hit the pool area. Coach was going to workout and meet me at the pool later.

When he arrived at the pool, I asked if he'd seen the sign. He hadn't.

Sorry folks, the parks closed. Moose shoulda told ya out front. The pool and the hot tub heaters aren't working. Sorry for the inconvenience.

Come on. I was calm. Collected. The weather was beautiful. I'd gotten to the pool at 2 pm. It was in the low 70's. I could survive without dipping into the icy waters. I wondered if we'd change hotels though.

Coach had looked long and hard at hotels online. He studied photos of the workout rooms and the pools. Meanwhile I thought we'd do an Airbnb, so I spent a lot of time searching. He sold me on the hotel. Not wanting to deal with any possible issues at an Airbnb. Seriously. 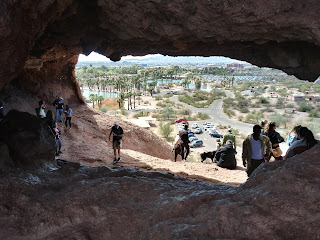 This was the view from one of our hikes.

Now, he was cringing. Just before we got dressed to go to dinner, I mentioned a hotel change. He was like:  OH, I'M NOT CHANGING TONIGHT, WE CAN CHAGE TOMORROW. The problem:  if we changed in the morning, we'd be without a room for a few hours which we could handle but we had food in our fridge. Have you stayed at a Home2 Suites? They have full size refrigerators. I carried some of my homemade GF stuff on the plane in a small cooler bag. Now we also had milk and yogurt. A switch mid-day seemed inconvenient.

The front desk balked at a hotel change when we suggested they put us up at one of their other properties with a pool that wasn't broken. Apparently Coach booked thru a third party place.

He used Expedia on our first trip to AZ for a class in 2016. I remember because it was the weekend Nancy Regan died. It was a huge hassle to change when that hotel turned out to be REALLY disgusting.

(Since we liked the pool and hated that hotel, we joked this weekend that we should just sneak back into that pool as it wasn't far from where we were. We looked it up for kicks -the guests had written reviews that were horrifying. Needles, drug deals, rude staff, etc. Were there needles back when we stayed there? I'm naive, and was probably more so in 2016 when I'm guessing that if I'd seen needles I'd have probably just thought:  OH, A DIABETIC HAS BEEN HERE AHEAD OF US.)

Coach was upset, because since that rotten experience he avoids third party bookings. He thought he'd booked through Home2 Suites directly.

I'll spare you details. Suffice it to say, we shopped in person at other hotels after dinner. Called places. Asked if they had a workout room, if we could have a late checkout, etc. Called the 'get a room' customer service, where Coach had booked, to ask about a refund.

This was a hassle, but through it all we were FINE, really. We were happy to be away and THRILLED that the forecast was amazing.

At first we decided to stay put, but Sunday when it was going to be 67 degrees and sunny, Coach woke up and decided he wanted a heated hot tub as an option . . . for me, this is implied, because he doesn't really do the sun.

We baled on the Home2 Suites.

There is more to this story, but I'm going to post the rest tomorrow. Such a shock, that this got lengthy. I got sidetracked and could've edited it down more but Tank is involved in a Mr. High School contest at the high school and he asked me to find a funny photo of him that would be used in the promotional materials. Well, can you imagine how easy it is to get sidetracked looking for entertaining photos of Tank? Yes, I went quite far down that rabbit hole. Way late for bed.

I hope you visit on Thursday because the best stuff about Arizona is yet to come. Then I will have to draft a post about Tank and this contest. It's going to be epic. His talent portion, well . . . it's something.

We've overnighted at a Home2 suites before, but you know, just for sleeping/showering and not really lounging.
NEVER. NEVER book through a third-party Coach.

Well, I don't know how this ends, but I do know you had warmer weather, so there's that.
Have I mentioned how much I love Arizona? We lived there for a year and a half (this is where Linds was born) and we really, really loved it there, but we were missing ALL of our people on the East Coast.

Also, I don't know how you bake in the sun. I avoid it at all costs, so if we ever 'lounge' together, I'll just pull up an umbrella next to you in the frying pan to cover me.

I can only imagine what Tank's talent is!!

I know that Hole in the Rock hike! It's a favorite place to take out of town guests, because it's impressive, but an easy enough hike. Especially for people who are acclimating to the weather still. I thought you might have been in town for a medical conference, because I had relatives come into Phoenix last week for that conference.

We moved out to Phoenix, from Providence, RI in 2001. It was supposed to be a 3 year plan. We're still living in Phoenix, and it looks like we aren't leaving any time soon. It will be 20 years in July that we've lived here.

Suz - Yes, the Home2 Suites is a decent set up. We really weren't planning to be inside all that much and the pool area in the photos was delightful. I was on the fence about changing hotels but it was sort of a part of our plan and we were getting ticked that part of our plan was not working out when there seemed to be plenty of other hotel options that would work.

Coach was so confused. He said he goes to the site that lists all the hotels, and then calls the hotel directly. He isn't sure how he managed to book through the 3rd party AND NOT KNOW IT. Soon we will be avoiding routes with possible traffic issues and reminding each other to take our Geritol. It's happening. Hopefully we won't be duped into giving thousands of dollars to scammers like my father in law has. I don't want to be THAT kind of old.

My jonesing to tan is certainly on the fringe of a mental disorder. There, I said it. I do love to be tan. Not the tanning bed type though. My dermatologist has not freaked out about my sun exposure but I will be leathery in my old age - while booking hotels through 3rd party hotels accidently on the regular.

Tank's competition is going to be live streamed. I might have to share the link with you. It is high school boys being goofy and making people laugh, if that's your thing. He is going to shock the hell out of people, in a clean and family friendly way.

Kara - No medical conference. Coach has taught a class on Tuesday nights in place of the weekend ones that he used to do. He's ready to get back to the weekend variety.

I kid you not, the day we got back he forwarded me an email that his company is looking to hire a regional manager in Phoenix and Dallas. I have good friends in Dallas and we love the weather of Phoenix. We aren't going anywhere, but what were the chances?

That hole in the rock hike was quite easy. I hesitate to even call it a hike, but I did a workout at the hotel in the morning through FB thanks to my HTMI cord that we packed. I was NOT interested in doing a lengthy hike. It was so pretty but really crowded because it was a Sunday.

I can totally see why you stayed.

I never knew Arizona got that chilly over winter. Hmm, the things that I get educated on reading blogs!

How did the kids do while you guys were gone?? Auntie Bitches forgot to go check-in! ;0

I missed this blog post yesterday...I was busy trying to figure out a podcast. Now my brain hurts. I need a vacation.

Kari - The nights still get chilly so those outdoor pools are not exactly warm if not heated.

I should write a whole other post on how the kids did without us. There were really no issues to report, thankfully. Unless you count that no one did any of the assigned 2 minute chores I left written on a paper IN BOLD before I left.

Some days are busier than others . . . it took me forever to get to comment on your tater tot post. Turns out hunting for the desired pool experience is busy work. If I decided to alter one thing on my blog, like my header - I'd need to set aside an entire day with no distractions. Hope you enjoy my permanent header. You're lightyears ahead of me figuring out a podcast and all. ;) And what's spotify . . . kidding. But I don't have it. Music related stuff, not my strong suit.