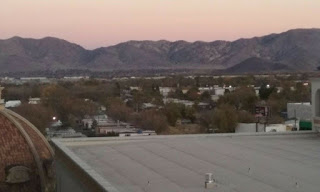 Coach just sent me this picture of the view of his hotel room.  In Reno.  He is there taking a class.  He teaches classes and gets paid sometimes.  This isn't one of those times.

Lately I have been wondering what it would be like to be 'him.'  It would certainly suck to bear the weight as the breadwinner for this crew.  That would translate to a lot 'o babysitting for moi.  Anyway, aside from the salary issue - there have been a few things that have cropped up recently that have given me pause.  It is either pause, or a serious headache - I choose to pause.  And take deep breaths.

After the game, I called Coach to touch base.  It was going to be a 'who-is-getting-who' kind of night.  Reggie plays on the boys' 7th grade team, so when the girls are home the boys are away.  Coach was leaving Reg's game to go home and grill dinner.  This away game was like a mile and a half from our house.  Coach informed me that Reg was required to stay for a scrimmage that the coaches had arranged for their bench warmers.  Reg wouldn't play, but that meant someone had to go back and pick him up after the bus brought him back to our school.

My husband was 'Oh-shitting' the fact that he had gone to the bank earlier - as in, the SAME FLIPPING DAY.  What?!  Now that Coach gets checks in the mail for teaching, he occasionally deposits them himself at the bank.  (I was chatting with Coach's former-and-desperately-missed-office-manager and she told me that we could be depositing these checks with our phones.  Now I fear that Coach and I have turned into my parents.  We are not keeping up with technology).  Prior to Coach's new interest in depositing his checks, I was the sole bank-goer.  Why, oh why, had he not asked me if I needed anything from the bank?  Like, I don't know, CASH!!!

The Midwest Irish dancing championships are approaching and I am springing for private lessons for Curly left and right.  I don't exactly like to share with Coach how costly these extra lessons are, so I suppose it was just as well.

You definitely need to start depositing checks with your phone. It is sooooooo convenient.

I am in charge of paying all the bills and anything money related - well money spending related, not money making related ;) My husband panics whenever he happens to see or hear how much money we are spending. It's better for his mental health if he doesn't know. Plus, he thinks everything costs what it did back in the 70s so he thinks everything is waaaaaaaaaaay more expensive than it should be. He's like a 90 year old man in that respect.

We had a couch that fell apart prematurely about 12 years ago from a reputable furniture store. I complained and they offered me a $100 voucher towards a new couch. Coach said if I could find a couch for $100 in their store, I could get a new couch. I couldn't buy a throw pillow in their store for $100. My guy is also a 90 yr old man.