Exhibit A, if only it ended there

I fished the thermometer out of the heap of crap that I had dumped on the bed while I was on the phone with the hotel/convention center asking if anyone had turned in my credit card. 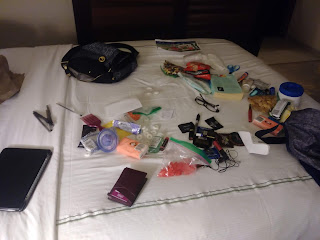 All the important items necessary for a dance mom to carry, minus a credit card!

I figured out that I had probably dropped my credit card in the pitch-black-early-morning hours as I was trying to pay my cab driver.  Reason number two million and seven why Irish dancers and their families should not be expected to get out of bed at insane hours.  I DO NOT FUNCTION WELL ON DIMINISHED SLEEP.  The dropped credit card is only exhibit A.

Wow, had that taxi ride really been earlier that morning?  It felt like a lifetime ago.  I shoved the thermometer in Curly’s mouth and answered a few questions that the hotel staff was asking me on the phone.  Could I describe the card.  Gold.  What name was on the card?  Ernie Shenanigan.  Bingo.  They had my flipping card!  Awesome!!!  Some kind soul turned in my card instead of going shopping with it.  The luck of the Irish! 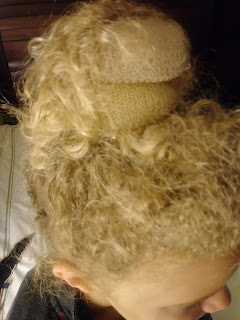 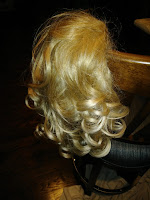 I am trying to blog on my iPad - and it is arguing with me about adding captions.  I am losing.  This bottom pic:  Curly’s awesome curls!  Sigh.  The pic above it - her wig.  Grrr.  The top picture is the aftermath of wearing a wig.  There are two donuts attached to her pony tails with the help of a zillion bobby pins.  Guess how much fun that is to remove after a long day of dnacing?

Curly’s temperature registered at 101.  Shit.  I told the hotel peeps (that had my credit card in their possession) that I would be back the next day, would they hold it until then?  I wouldn’t need it before Curly danced.  Yes, they would put the card in the vault.  I could get it at the front desk the next morning.

I texted Curly’s teacher and shared the bummer news about Curly’s fever.  Then I dosed her with Motrin and put her to bed.  Mini left to walk back to the other hotel to watch the awards ceremony for her age group.  I had a ferocious headache and I struggled to sleep.

The next morning we were at it again.  I prepared breakfast for Curly and I as quietly as possible behind the goofy sliding wall.  I showered and dragged a sleeping kiddo out of bed.  Since Mini was sleeping in a bit and planning to come later, I took on the role of the Irish dancing mom/sherpa.  I asked Curly to carry a few of the lighter bags and then I gathered up the rest and we were off.

Curly and I hopped in a cab.  The bags were like a tangled mess and acted like an extension of my body.  I slid them across the seat in the cab and then I followed.  Curly got in after me with her one little food bag.  It was the same cab driver as the day before.

We were running a few minutes late, so I told Curly to run into the lobby where the junior teacher was waiting to start with her makeup.  I dragged the bags out of the taxi and paid the driver.  In a Herculean effort, I managed to carry everything into the lobby of the hotel.  With a big sigh, I released the dress bag, the food bag, my purse, and another bag of miscellaneous items in a stack right where Curly was getting her makeup started.

I glanced around.  Panic set it.  I reassured myself that I had to be wrong.  It was HERE! Right?  RIGHT??!!  I shoved things aside.  I stared in disbelief.  Turned around in a complete cInclement.  The most important bag was not there.  The black bag (remember the fun I had with this bag in Montreal?) that held Curly’s dance shoes, wig, head piece, and all the bobby pins and accessories necessary to attach a wig to an already incredibly curly head of hair.  GONE.  NOOOOOO!!!!!!

This is just the beginning!