like a kid in a candy store, plus cops

Tank and I looked at each other wide-eyed.  We were alone in the flunkie contractor's office.  I couldn't make this stuff up if I wanted to.  Totally bazaar.

Tank immediately walked thru the office to see if we were in fact alone.  We were.  I tested out a tall file cabinet.  It was unlocked.  I glanced around at papers on various counters and desks.  I felt like a kid in a candy store - only I didn't know what was candy and what was poison.

Babs poked her head back into the door about 6 minutes later.  I jumped.  I was standing in front of the tall file cabinet jotting things down on a notepad.  'Um, just be sure you lock up when you leave,' she requested.  WHAT?  What would I lock up with?  I didn't have a key.  Obviously.  What kind of crazy job security does this chick have?  Are these people all on drugs?

I texted Paulie immediately.  'We are alone in your office.  Babs left.'  He texted back in record time. 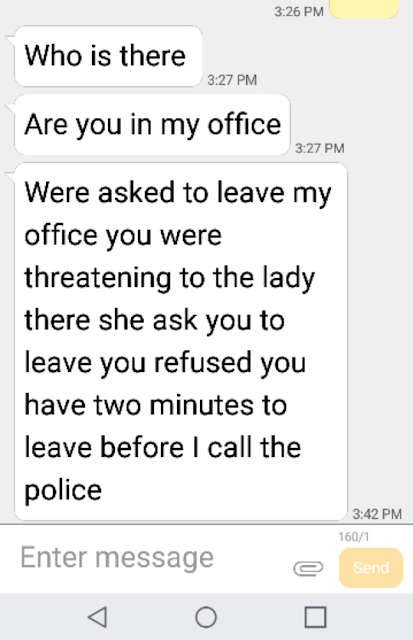 He was definitely sweating.  Tank called out, 'Don't respond to him.'  Oh, I had no intention of responding.  I hoped he would show up at his showroom.  I had some things I wanted to say to his face.  Of course, I hadn't threatened anyone.

I started jotting down names from a file that I found in the file cabinet.  This was a file of prospective clients.  These people wanted Paulie to get back to them, or start their job, or give them a quote.  I so wanted to send an email and warn them.  'Go with another contractor.  You're welcome.'

Then we started snapping pictures with our phones.  It was faster.  There was an invoice from a plumber.  Snap.  Attached was a bright colored sticky note.  'Plumber says he won't go back to the Whelan job until he is paid for the Ryerson job.'  Interesting.  Paulie was robbing Peter to pay Paul.  As suspected, he wasn't paying his subcontractors.  This is why progress on our job had stalled so frequently.  There was also a collection notice for $1,800 from some company.  Snap.

Long story, but I met another family via YELP who was experiencing similar issues with our flunkie contractor.  They were the Whelan family, whose job the plumber wouldn't return to until the plumber was paid.  I called up Mr. Whelan.

'You'll never guess where I am!' I squealed into the phone.  I described the plumber invoice.  Whelan couldn't believe that Babs had bailed AND asked me to lock up.  (Whelan was the one who pointed out to me that the guy who tiled my back-splash is not in fact a tile guy.  Swell.)

Tank kept busy removing the batteries from the clocks.  He hid their land lines.  He wanted to mess with Paulie's computer, but I pulled the plug on that.  Tempting, but no.

Tank started to get nervous that the police would show up.  I was ready.  I had nothing to hide.  Once I hung up with Whelan, I called Coach at work.  I told him how crazy it was that Tank and I were in the office alone.  That's when I noticed that the police were getting out of their car.  'Oh, I gotta go, Coach.  The police are here.'  Coach later described the kicked-in-his-gut feeling when I informed him that the police were there and then quickly hung up.

The cops asked what was happening.  I told them all of it.  I pointed out how crazy it was that Babs had run off, and that despite Paulie's claims, I hadn't threatened anyone.  They chuckled about the threatening part and told me not to worry about it.  I wasn't.

They called up Paulie.  The cop told him, 'I can't make people talk nice on the phone or send nice emails.  Let me know what you want us to do.  Are we going to ask Ernie to leave, or are you going to come and give her the materials that she has paid for?'  Then the cop said, 'OK' and hung up.

He looked at me and said, 'His exact words were:  Tell her to take me to court.'


Your real life is far more exciting than ANYTHING I watch on TV!!!!!

Wait till I describe what I did while in Orlando July 4th during Irish dancing championships! I have a few posts to share before that. Something I needed to get off my chest. Be patient. The July 4th thing is pretty UNREAL even for me!

Oh dear God - it never ends! What is wrong with people?!