As a junior in high school, I represented my class by serving on student council.  Traditionally at my small Catholic High School, the junior class board organized the junior/senior prom.  I enjoyed being involved in the prom planning, but as the date for the dance approached my dateless status annoyed me.

I can't say that failing to receive an invitation to prom shocked me.  While my oversized glasses were in style at the time, they added no aesthetic value to my face.  To give you an idea of what I'm referring to, I've inserted an image of the popular character 'Carol Seaver' on the sitcom 'Growing Pains.'  Carol benefited from being cute with or without glasses.  I suspect if my morning ritual included meeting with my hair and make up people each morning like Carol probably did on the set of her show, there would have been hope for me.

Truthfully, my hair was cropped so short, I doubt even a professional could have helped upgrade me.  Of course, a  wardrobe coordinator to outfit my tall lanky self with suitable clothes other than those my shorter sisters had outgrown wouldn't have hurt either. 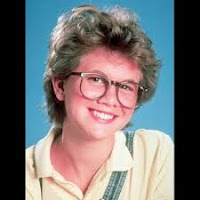 Because I was equipped with a sharp, self-deprecating wit, my classmates were aware that I was bummed at not having been asked to the prom.  My pathetic situation became a running joke that most of the school was in on.  My willingness to laugh at myself openly  endeared me to my friends and classmates.  This arrangement functioned perfectly thanks to my unique school setting.

I thrived on attending this particular high school, which segregated the girl students from the boy students.  Although our classrooms were housed in the same building, the clear separation between the two sides of the building was a constant reminder of the two distinctly different schools.

Both sides of the school shared a library, gym, auditorium, and cafeteria.  While we were able to utilize most of these important places during separate times of the day, both boy and girl students ate lunch in the cafeteria at the same time.  In the first few weeks of my freshman year, I learned quickly to avoid using the girls' bathroom during lunch unless completely necessary.

Choking on the clouds of hairspray generously applied by the girls who were prepping to encounter boys could kill an appetite - if not the ozone.  As an awkward teenager with hair styled too short to be attractive, my high school years were dedicated to building lasting relationships with my quirky, fun girlfriends.  Romance was not on my agenda.

A half day of attendance was scheduled for the Friday of prom.  After a student council meeting that morning, I noticed a guy student exit my homeroom and walk off in the direction of the 'boys' side'.  Guy sightings on the girls' side were rare, so his appearance caught my attention.  Although school hadn't begun, I was at my locker when he walked by.  Before heading for the lounge to hang out with friends before the bell rang, I stopped in to see my french teacher who was also the student council moderator.

I asked her why Bill had just been in her classroom.  She shook her head and gave me a sad little pout.  'He was selling me back his prom tickets, because he and his girlfriend broke up,' she explained.  'Oh, that stinks,' I winced.  Even though I could almost see the light bulb brighten over her head, I was still shocked at what she suggested.

'Ernie, you know him?!  You called him by name.  You should go over and ask him if he wants to go to prom with you,' she squealed.  I erupted in a fit of nervous laughter.  'Oh, I just know him because he comes into Burger King often.  His best friend works with me,' I told her.  The truth was, I doubted that Bill would know my name if I wasn't wearing my maroon, polyester Burger King uniform and name tag.  That's right . . . in addition to bad hair, ill-fitting clothes, social awkwardness, and enormous glasses, I also worked at Burger King.  I was living the dream.

The wheels of my brain began to spin.  It didn't take much imagination to consider what fun it would be to land a last minute date to the dance I had whined about not attending.  Ms. Frenchie wrote me a special pass granting me permission to walk to the boys' side.

In the boys' office, the secretary looked up what classroom Bill was in.  The moment of truth came rushing at me when I left the office and practically ran right into Bill.  While I was happy to avoid the embarrassment of knocking on his classroom door and requesting his presence in the hall, there was no time to procrastinate now.

'Hey Bill,' I muttered.  He nodded in my direction before realizing I wasn't just greeting him.  I stopped walking and he noticed I was attempting to start up a conversation.  'So, I heard you aren't going to prom,' I stuttered.  At first he looked insulted as if I was just planning to remind him of his agony.

'Well, I'm not going either, and I wondered if you would like to go together,' I rushed through the rest of my plan.  Bill's face lit up.  He agreed to bring me as his date, since we both wanted to go.  This was his senior year, and all of his friends were going.  His tux was rented too.  We exchanged phone numbers before I raced off to my familiar territory on the other side of the building.

The hallways buzzed with prom talk.  Fellow students raced out the door when school dismissed at noon.  Most girls had nail appointments to keep and big hair to tease.  My agenda presented a different pre-prom check list.

First I called my mom at the school where she taught 4th grade.  I needed to make sure she was OK with me going to prom.  Mom, the eternal matchmaker, was overjoyed that I had a date at all -  much less to prom.  There was no mention of the small technicality that could have interfered with the entire deal . . . I was supposed to be finishing up the longest grounding sentence ever administered in the Chicago area.  If she wasn't focused on the tail end of my 6 week grounding, then I sure as Hell wasn't going to remind her.

I tried on the dress that each of my sisters had worn to prom.  It fell shorter on me than it had on them, but why would this occasion be different than any other?  The satin pink dress with a gathered band across the shoulders would work fine.

Thanks to the reduced school day, school let out shortly after I had finalized my date.  Many girls weren't informed of the new plan.  They hadn't expected to see me that night.  Bill pulled up to a stoplight in his father's Cadillac en-route to prom.  A classmate, who found my life particularly entertaining, was driving in the car next to us with her date.  Her chin dropped and her face delivered a priceless expression.  After managing to pull off a last minute date to prom, I had the last laugh.
Posted by Ernie at 8:39 PM