Play or not to play

I've found myself reflecting on my own illustrious basketball career thanks to the March Madness Tournament.  Neither of my older sisters ever exhibited any interest in sports.  Their sole display of athleticism was their Irish dancing abilities, but let's face it there's no defense in dancing.  Perhaps my mom viewed me as her last chance at producing a girl jock.  Whatever the reasoning, she suggested I give basketball a try.  Summer before 7th grade I was enrolled in basketball camp at St. Mary's College, Notre Dame (my future alma matre).  Growing up in the '70's/'80's meant sports programs did not start as soon as you could walk.  Girls under ten didn't start playing on YMCA teams, attending camps, and practicing drills on the driveway . . . at least not as far as I  knew (perhaps therein lies the issue). 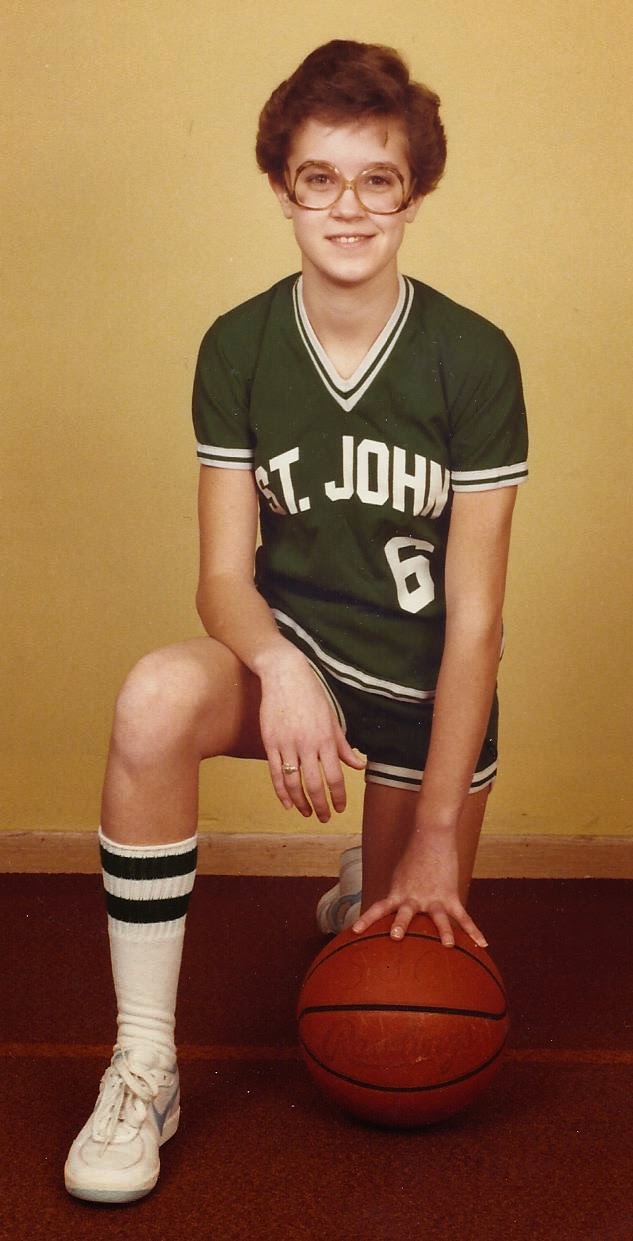 There were tryouts to make the 7th grade team at my Catholic grade school.  Not many tried out.  Most made it.  Its safe to assume that my height factored in to my placement on the team.  So for 7th and 8th grade I geared up for practices and games by securing my glasses with a protective black, elastic band.  My ankles sported stretchy ankle braces, and my feet were laced into my regular 'ole sneakers.  I wasn't winning any beauty contests in the Kelly green, polyester uniform with my fluffy, short, 'Dorothy-Hamel-run-amuck' hair do either.  OK, so the Dorothy Hamel was what we called the cut when I was in kindergarten.  I'm not sure how to label it almost ten years later . . . besides gross.  Although my butt warmed the bench, my mom referred to me as the '6th' man, so I saw more playing time than some teammates.  Again, my time on the court can be attributed to height, not skill.  Coaches probably kept hoping to cash in on my height.  Let down city.  I often treated the ball as a hot potato, which meant I rarely contributed to the score.

My Uncle Pat became our team's biggest fan.  He attended home and away games.  He encouraged me, and enjoyed cheering for the talented Dana, Alice, and Monica.  Our three stars.  The triple threat.  Being the quiet, nerdy, sensitive type, the team gave a handful of my classmates an opportunity to get to know me a bit better.  Once when driving Dana home from a game in my mom's car, the radio mentioned a 'Motown' hit.  I admitted that I didn't know what 'Motown' was.  Dana's laughter outdid the volume on the radio.  My new nickname was born:  'Motown.'  News of the moniker spread throughout the team.  Thankfully, it was a term of endearment, so I didn't mind that my teammates called me 'Motown' or 'Mo' occasionally.  Ah, the glory days.

My family  moved to a Northern suburb 45 minutes away from my grammar school the day before I began high school.  The only person I knew in the high school building was my sister, who was a senior.  Once again Mom encouraged me to try out for the basketball team.  I was unsure.  This was high school.  Everything was bigger.  No one would call me by my familiar 'Motown'.  To my brothers' dismay, Mom promised to purchase me a pair of Air Jordan's if I made the team.  It was 1985.  Air Jordan's were huge.  My brothers didn't own a pair between them.  Of course they elbowed each other.  What a joke.  They knew I wouldn't make the team anyway.  I agreed to try out.  I doubted I could measure up to the high school standards.

The day of tryouts arrived and some where deep within me awoke basketball skills I didn't even know I had.  I played the most amazing afternoon of basketball I've ever played.  Ever.  Rebounding, running, shooting, free throws, defense, and dribbling.  That was easily the most shocking part of it all.  I dominated at dribbling.  I'm tall.  Dribbling wasn't my thing.  The tall girl as the last one handling a ball during the dribbling knock out drill?  Counter intuitive.   But there I was when they blew the whistle.  About 50 girls - sophomores and freshmen, some point guards no less, gathered around the fringes of the court in clusters after being knocked out.  Freakish.  I recall looking around, but there wasn't anyone there that knew me from my 'Motown' days.  They would have been scratching their heads.  I felt as if I was floating above the gym watching this happen to someone else.  Dreamlike.

I remember calling Mom from a payphone in the school hallway.  "Looks like we are going to go shopping for Air Jordan's."  My brothers weren't laughing anymore . . . certain they were living in an unjust world.

One night before practice Mom decided to cut my hair.  While I was eating.  Her technique involved the use of a plain straight edge razor blade.  This tool helped her achieve the feathered look - at least that's what she claimed.  On this particular night, I leaned over my plate and tried to eat as fast as I could because #1.  I was late for practice, and #2. I wanted to ingest the dinner before tufts of hair drifted into my food.  No joke.  Blame the lighting or the odd angle my munching head protruded at over the table, but the next day I attended high school with a border line buzz cut.  Awful.  The basketball teams were introduced to the entire school that afternoon during the fall pep rally.  Our school building was divided into a side for girls and the other side for boys.  I imagine some fans suspected that I had wandered over from the boy side. . .  I digress.

The bummer about displaying raw talent at tryouts was the disappointment that followed.  Not my disappointment - my embarrassment.  Embarrassed that I was disappointing coach.  I felt like I pulled a fast one on the coach.  Perhaps I should have requested a private audience with her in order to share the truth about my crappy basketball skills before the final cuts were made.

The test of a true athlete vs. an accidental athlete:  leaning forward off of the bench hoping to remind the coach to toss you in the game so you can light it up vs. feeling relieved at not being chosen to go in the game because you don't want to mess up the game for your team.  My avoidance approach to the game departed from the major jock persona I presented at tryouts.

Eventually I felt the pressure.  Scoring pressure.  One night we creamed our opponent.  I received more playing time than I deserved.  After the game, congratulations shot across the bus directed at the bench warmers who scored.  Despite my additional time on the court, I still failed to sink one.  The season was slipping away and I still hadn't made a basket.  I broke down and cried on the bus ride home.  Now my secret - that my lack of scoring pressure was bugging me - became obvious to the entire team.  Damn that awesome tryout day.  Easier to suck 365 days a year rather than suck 364 days a year.

My brothers eventually got their laughs in.  They came to games strictly for the comic relief.  Everything I did was scrutinized from my inability to get open, to the goofy stance that coach taught us to use when boxing out after free throws.  Mom chuckled right along with them at the box out thing.  I swear I was following coach's directions.  Of course I was wearing Jordan's and my brothers weren't.

It was high school.  Insecurity reigned.  I was a freshman.  Self consciousness consumed.  Self doubt surrounded life in general, not necessarily performance on the team.  It was cool to be on JV getting to know other freshmen and sophomores, but each giggle and snicker that rose up from conversations across the room caused me to wonder.  'Were my failing abilities on the court the butt of a joke?'  I worried that the sophomores disliked me.  The whole group rallied around me on that tearful bus ride.  My defense was appreciated, I ran the offense well, I made good passes, etc.  Nice, heartfelt sentiments.  I choked down their camouflaged pity like the air I was desperate for after sprints in practice.  Air always helped, but it didn't eliminate the ache in my whole body.  What I really longed for was the ability to excel at the sport like so many of them did.

I was fouled in one of our final games.  My first free throw shot swooshed.  Finally.  Before I knew it, the entire bench jumped up, rushed the court, and celebrated with high fives and hugs at the top of the key.  The baffled ref gave a confused look with the whistle dangling from the corner of his mouth.  "Sorry, it's my first basket of the season," I explained as he handed me the ball for my next shot.  I missed.

I can't say when my basketball career ended that year that it was due to an injury.  Unless you count my wounded self esteem. Why continue on and give my brothers anymore material in the 'let's make fun of Ernie' scenario?  Of course the stars aligned, and they both walked onto the Notre Dame basketball team in college.  My Air Jordan's offered great support when I landed a job at Burger King that spring and worked long shifts.  I know:  a horrible hair cut, little athletic ability, and a Burger King job  - I had it all!
Posted by Ernie at 8:35 PM