I have a long list of things I plan to post about. Normally when I can't sleep, tackling something on that list would make sense. Right now, at 3:30 am on Saturday, nothing makes sense. NOTHING.

Earlier in the week, Curly attended Reg's home basketball game. Her games are often at the same time:  varsity boys home/varsity girls away and vice versa. She didn't have a game, so she got to sit in the stands with her friends.

On the way home I asked her where the twins were.

Curly met boy/girl twins C and K right before freshman year started. K played on the volleyball team with her. Curly went to homecoming with C, as friends - at least that's what I've been told.  The twins, Curly, a set of boy twins, and a few other kids formed a sweet little group of friends. They all introduced themselves when we first had them over. They emerge from the basement after they hang out and rather than disappear out the front door, they track Coach and I down to thank us for having them. Parents came to the door to meet us when they dropped their kids off too.

Curly was at the twins house ALL THE TIME. To be honest, I prefer kids to come to our house sometimes. I like to get to know the kids' friends. Curly had a blast over there. The twins' mom, Lisa, was always home. She'd drive Curly home from school or volleyball practice if Curly had to wait for a ride. Our house is out of their way.

I met Lisa at a volleyball game. She was very nice and was over the moon about her kids spending so much time with Curly. "WE JUST LOVE CURLY. SHE'S SO SWEET." The twins have no other siblings and the mom was very involved in all of their activities and organizing gatherings like homecoming dance pictures, etc.

She hosted a pumpkin carving party at Halloween. She shared a bunch of photos of the group in a mom group text. The dad acted as the judge of the best pumpkin, etc. I don't throw my teens a friend birthday party annually - I shoot for doing something when they turn 16, but Lisa helped her kids pick out a gift for Curly's December birthday even though there wasn't a party. 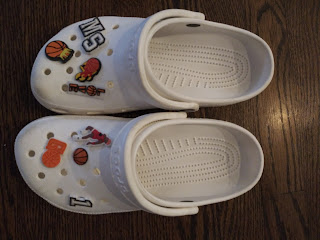 Curly was thrilled the crocks, which was on her wish-list. I had covid on Curly's b-day. She had an away game. Lisa was there for K's game and made sure to give Curly a birthday hug at the game.

Lisa also texted me to say how much they enjoyed our family Christmas poem. My poem, if you recall, is lengthy. I recap the year with a focus on poking fun of the nonsense that happens around here. Before I'd even gotten Lisa's text, Curly mentioned that the twins' family raved about the poem. Props to a family that just met us in August, but bothered to read my whole poem.

The twins play freshman basketball and their whole family would sometimes stop by and watch Curly play since varsity is scheduled after freshman.

On the ride home from Reg's Tuesday game, I asked Curly why the twins weren't there. Curly told my mom and I that Lisa had some kind of female related surgery and when she got home she had an issue. She went back to the hospital in an ambulance. Internal bleeding and maybe a brain bleed.

My mom and I were alarmed. Surely 'brain bleed', couldn't be right. Curly said they weren't supposed to tell anyone and only she knew. I've met the moms of her friends and I'm on a group chat with them, but I don't know anyone well enough to text and inquire what was going on. I did tell Coach. I told Curly that hopefully Lisa would be fine. We all prayed for her.

The kids had exams during the week and Curly said the twins were so upset. She hugged K in the hallway Friday, the last day of finals, and K cried and ran to the bathroom.

The twins went to Curly's game last night (Friday). I took that as a sign that things were improving. On the ride home, I asked Curly for an update. Curly said K texted her and said Lisa could come home the next day. I felt so relieved, "See, honey. She must be doing well."

Before I went to bed, Curly came down the hall, "MOMMY!"

She was sobbing. I looked at her, confused. "WHAT?"

Lisa died. The twins had just been told and they both wanted to call her. Lisa had lost too much blood/brain bleed - blood clot. She wasn't able to wake up. Curly and I were sobbing, and groaning. Coach came running up the stairs. He fell to his knees in the hallway. Disbelief. She was young (40's) and seemingly healthy. (*editing to add:  she's technically on life support, because the kids went to the hospital Sat morning to see her.)

I feel awful. This poor family. Curly is devastated and so worried about her friends.

Curly:  How will they go back to school? They're gonna miss her so much. How will they stop being sad?  What am I going to say? How will K grow up without her mom? They didn't get to say good-bye. The last time K saw her she was being taken out of the house on a stretcher. She should've been fine. It was ROUTINE. She was SO nice. Someone made a mistake and they're gonna call me back and say she woke up. Why can't they just wake her UP?

The dad is so overwhelmed, apparently blaming himself (guessing because he's a doctor and wishes he'd recognized that she was in distress sooner)..

I told Curly that it was great that Lisa got to know the twins' high school friends, because Curly will always remember her. Another mom (who Curly finally gave me permission to text once she knew that she knew, so I could inquire what we could do to support them), who felt equally awkward about how much time the group spent at their house, told me she'd offered to send food once and that Lisa had waved her off. We both agreed that we are now glad that she created those memories. I urged Curly to continue to be a good friend, listening when they want to talk, and understanding when they don't.

A few weeks ago when I was freaked out by my lab results, I kept thinking of all the things I still wanted to do/say/enjoy with my kids. Lisa won't get that chance.

I slept for a few hours, but when I woke up it seemed like a bad dream and then I remembered that it wasn't and I couldn't sleep. I cried off and on all day and I didn't even know her well. My heart breaks for all of them. Curly had a game Sat night and she had me send a link to C and K. They wanted to watch her game to pass the time.

Life is so fragile.

Oh no! This is just heartbreaking. That poor, poor family. I am so sorry. What a shocking loss.

Oh no, oh no, how awful. You're right, nothing makes sense of this. I'm so sorry.

Oh my. This is horrible and so so sad. That poor family. My heart breaks for them. We just have to wonder why bad things happen to good people.

Tragic! Those poor kids and their dad! I will pray for them all. Why are so many young people getting blood clots?? It scares me so much as my husband has them too :(

My heart is breaking for Lisa and her family. Why must bad things happen to good people? We will never know.
Sending up prayers for her family.

This is truly a tragedy. So sad, so unfair.

Life can be so unfair sometimes. This is awful. There is nothing you can do except be there for Curly and all the kids who will be effected.

This is sad and makes you wonder, doesn't it? There's little you can do now other than be there for the twins if they need your support. So unexpected & unfair.

Oh Ernie, no. This is so devastating and tragic. Truly, life is so fragile.

How heartbreaking! The twins are fortunate to have a good friend like Curly, and hopefully they will be willing to reach out to you or another mom in the friend set when they need a mom.

This is tragic. I feel for that family and yours.

Friends, Thank you for sharing your thoughts. It really is such an unthinkable nightmare. I just so wish we could hit rewind and go back to avoid this. The twins came to Curly's game tonight. Glad they are venturing out. I'm going to try to attend their basketball games for the rest of the season - they will play before Reg or Curly, so whichever game I go to (the boys away or the girls home, for example - I'll just get there early to watch the freshman). Maybe I can find out which game the dad is attending and go to the one that he isn't at. Curly spent yesterday and a big part of today with C and K. (no school today). They are happy to spend time doing normal stuff, but not wanting to leave the house much fearing their dad will be lonely. I'm in contact with the other moms in the tight-knit group of friends and we will step in wherever we can. Lisa was a detail-oriented, attentive, loving mom who put little touches on everything she did. Valentines day is coming, so maybe homemade heart shaped cookies are in order. The void will always be there. Hoping they feel comfortable reaching out as needed. xo Ernie

Oh, what a heartbreaking story. I'm sure you will step in and up as much as you can over the next few years. They (and you and curly) will be in my prayers.

Oh my goodness that’s so sad. I’m so sorry for the family. You’re right - life is fragile xo

So sorry to hear this.

This is heartbreaking. I will be praying for C and K and their dad.