*A different post poppped up here briefly this morning - a small mixup, but THIS is the post intended for today. I'm a little groggy as I prepare to tailgate at ND this weekend and my sleep is suffering. Can't wait to share about last weekend's tailgate at Ed's school . . .

After the Sept 10th tailgate, I laid Gumby on the living room couch out of the way as one does. It didn't make sense to roll him back up into a ball, stuff him in a giant bag, and stick him in the storage room. Not when we planned to showcase him at our next Notre Dame tailgate in mid-October.

A few weeks later, Coach ran home during his lunch. I took an important phone call in the study leaving a gaggle of toddlers to entertain themselves for a few minutes in the family room. Coach popped his head into the study as he was heading back to work, mouthing something that wasn't quite SEE YOU LATER or HAVE A GOOD DAY. It was something I struggled to decipher. I wondered if he was telling me that one of the tots was scaling a wall or running with scissors or something. After a few attempts he shook his head and walked away.

That's when it dawned on me. He'd been saying:"POOR GUMBY".

No wonder I was confused, since these are words not usually spoken during a quick dash in and out on Coach's lunch hour. I wandered across the hall to the living room. That's when I saw it.

Gumby, who had been carelessly tossed to the floor by a kid who wanted to sprawl on the couch, lay surrounded by shredded, bite-sized bits of his own sponginess. His face was frozen in a look of surprise. Although, if I'm honest, he rocks the 'oh crap' look at all times. He'd barely survived a brutal attack by a certain canine, who wishes to remain nameless.

At the time of publication, Finnegan has three paws out the proverbial door for this and other recent infractions. I can devote an entire post to Lad's dog and his behaviors. Perhaps another time.

Sickened as I was, I never collected his dismembered bits, thinking that was a chore Lad should handle. I assured myself that if I could create a lifesize Gumby, then I could patch him back together.

Lad was remorseful, but he wasn't inspired to watch his dog more closely, clean up the spongy mess, or relocate Gumby to another space. I was very busy, cooking food, babysitting, writitng, attending volleyball games, etc. I'd inspected my creation and noted that despite the scatterings of torn pieces, Gumby really only needed a new foot.

A week before the tailgate at Ed's school, I was working out in the family room on a Saturday. Lad took Finn out before he left for work. When he came inside, I told him that I was doing a short workout and when I was done, I planned to take Finn on my run. Lad went upstairs to get dressed for work. He didn't tie Finn to the back door. When I'm not babysitting, Finn often roams around the first floor. I walked into the kitchen just in time to see Finn slide into the room as if he was being chased out of the living room by a German Shephard.

Dangling from his mouth was the remaining part of Gumby's leg. NOOOO!!!

Hearing my cries of disgust, Lad came running. He was apologetic. "I'm sorry. I only left him for 2 mintues to get dressed." He promised to fix the amputated leg. The thing is sponge cannot be sewn to sponge and Lad is a creative guy, but not exactly current on costume creations.

Before I ran with Finn, a run when my frustrations drained from me, I dragged my green buddy up the stairs and tossed him on the floor in front of my dresser - not far from our broken washing machine. Also not far from the row of three pack-and- play portable cribs that are a fixture under our windows during the school year. Some people deocrate their bedrooms so that they are a sanctuary, a calming place. Our bedroom shows all the signs that we are hoarders who struggle to keep order and maintain balance. 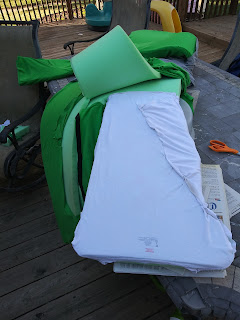 I regretted not having moved Gumby after the initial attack, but I really believed that Lad would watch his dog more closely. It hadn't occurred to me to store him upstairs - the only place Finn doesn't go.

After my run, I exchanged texts with Lad. We would figure this out, which translates to:  you will go to the craft store to buy supplies and I will find a way.

Days later, I stood on my deck during nap time. I stuffed a new foam piece, 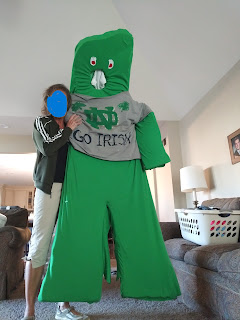 purhcased by Lad to my specifications, inside one of Coach's old undershirts. I glued the top of the t-shirt to the jagged hip piece. Then I stitched through the t-shirt and the foam piece with big, deep sutures, hoping it would hold. I doubt anyone will ever wear the costume again now that Gumby has been repurposed as a beacon at tailgates, so his studiness is not all that important. The green costume was unharmed, so I draped it over my guy's new limb and asked Coach to snap a photo of me with the new and improved Gumby. Then I texted it to Lad.

A few days later I asked Ed if he had an opinoin about whether or not Gumby make an appearance at the tailgate at his school. Note:  Gumby's green coloring leant nicely to the Notre Dame theme, but I wasn't sure if he would be as relevant at a school where red is the main color.

Me:  Well, will people be able to find us better if Gumby is on our car?

While it might be rude to reveal someone's size, I will share that Gumby requires a size 3x. I went back to Goodwill and purchased the prefect red and gray shirt. Then I painted the 'IU' logo on the front of the t-shirt, thus expanding his wardrobe. I stuffed him in my car and prepared to introduce him to a new college scene.

FINN NOOOOOOOOOO
I could see this happening - Gumby would be so nice and chewy for a dog! You did a great job fixing him. You can't tell at all.
Ed cracks me up!

Best line of my day. Seems like it should be meaningful, but maybe it's just funny. You put Gumby together again, better than the fate of Humpty Dumpty, for sure.

Gumby is going to be a family heirloom piece! The kids are going to fight over who gets Gumby custody in the future.

Poor Finn, he's just doing what bored dogs do. He probably would do great in doggie daycare, but it's most likely not in Lad's budget (hint- it's as expensive as child day care).

This is SO not how I would have reacted (surprise, surprise). Again, I am beyond astonished by your attraction to All Things Worky.

But bless your heart (and not in that barbed Southern Way), you are an Energizer Bunny. Whereas I would have interpreted the Finnegan Intervention as a sign from the Fates that I need to Settle Down and Stop It, you merely saw it as A Craft Challenge.

Oh that Finn. He is determined to be your nemesis. Glad you were able to mend the severed foot!

Finn obviously admired all of your handiwork. Who else would make a Gumby costume and keep it for many years only to have it reprise itself at college football games. No one that is who. :)

Nicole - Thanks. What can we do if not laugh at this sort of thing, right? Honestly, Gumby's legs don't really come into the line of sight when he is mounted on top of the car. Twice though? That was too much.

Tank is my comedian and Ed has a great sense of humor, but he is more of a 'do what is normal' type kid. He did appreciate having Gumby up there at his college, because his friends found us with no trouble.

Ally - When I had some distance from the mauling, I was able to chuckle about it. I have tall kids, who knows when one of them might want to borrow Gumby as a costume. He is restored, and we know not to bring him into to the house again unless he is well guarded.

Kara - I know a few of my more 'let's not draw attention kids' will probably not be interested in Gumby, but you might be right. A few of them might call dibs.

Oh Finn. We have not figured him out yet. I do believe the first incident happened when Lad was asleep on the couch and Finn saw me go up to bed. He was at the bottom of the stairs, unattended and probably ticked that I was going to bed too.

Nance - Well, I will be the first to admit I am not all that great at being 'worky' when it comes to housework. It is low on my priority list - plus the kids trash the place in minutes.

I do enjoy creating things. Funny, but if I had any real career guidance or if anyone every took the time to ask me what I enjoyed doing, etc. maybe I would've ended up in costume design somewhere. My business degree has not been a real source of fulfillment for me. My Sesame Street costumes? And Gumby? Now those were fun.

Pat- It is funny that he LOVES me, because he really is going to be the end of me. Well, the first incident it was just a foot- but it looked worse. The next time around - it was the whole leg. Goodness.

Suz - Hello there - I've been thinking of you. Hope you are well.

I died at your 'I'm FINN DAMNIT.' So clever.

Oh the things stored away in that storage room. Always happy when something down there ends up being repurposed. Now, if Finn ever goes after my Big Bird masterpiece, watch out. He tends to be more into squirrels than birds though. ;)

Poor Gumby! I'm glad you were able to fix him as he has lots of tailgating in his future!!

I have a feeling Lucy would go to TOWN on Poor Gumby. "Not wanting to reveal someone's size" lol. This is definitely one of those things no one tells you about when you decide to have children - someday you'll be trying to re-limb and dress a giant Gumby in time for a tailgate.

Beth - Yes, poor Gumby. He is now peg-leg Gumby. He sure does have a lot of tailgating in his future, because he served us well this season.

Ali - For some reason, I read 'Lucy' but I thought 'Eve' and it took me a minute to figure out why Eve would go to town on Gumby. I think I have a sinus infection so my mind is a little fuzzy.

Ha, so true. Words I thought I'd never say: BEFORE WE LEAVE I NEED TO RUN OUT TO THE CAR AND PULL GUMBY OUT AND CHANGE HIS SHIRT FROM THE IU TAILGATE TO THE ND TAILGATE. Imagine the neighbors driving by, spying me wrestle with the big green guy as I re-dress him minutes before we drove to ND. Keeping him in the car seemed to be the safest place for him this week.