Well, that was quite a sidetrack. I'm sure I had pressing things to discuss, but I came across a stack of flyers and ticket stubs and Coach's notes about what to see in Prague the other day and I decided to give you a recap of the last city we visited on our Europe trip.

If you are just joining our long-paused program:  Coach and I visited Ed in Budapest when he studied there in the spring. Amazing place, highly recommend. After a few days in Budapest the three of us went to Vienna together - very cool, and very different from Budapest. Very artsy. The Habsburg summer mansion was a highlight. The loud pigeons on the windowsill all night were NOT.

I believe that's were we left off- the pigeons.

Coach and I said good-bye to Ed, whose train back to Budapest was hours before ours, and then he and I finished touring Vienna and went to catch our 4 or 5 hour long train ride to Prague. We paid for a seat in a four person compartment. It was nice and comfortable. We shared the space with a young couple who weren't interested in reciprocating my friendly attempt at conversation. They could speak English, but chose not to.

Ed bumped into strangers in bars, trains, and hostels and enjoyed becoming acquainted during his semester abroad. I would've enjoyed a similar experience, but that didn't happen. I'm going to blame our age and assume we didn't appear grumpy and unapproachable.

We had to rely on Google Maps to get to our Airbnb and that was an adventure. It was late and we were starving. The path took us through a shopping center that was closed at the far end. There was a lot of retracing of steps and grumbling.

The sweet Airbnb owner met us when we arrived. She oriented us to the place. After she left, I noticed that the thermostat didn't work. Dead batteries. She came back and installed batteries and I was practically gnawing on my own arm.

The girls chose this moment to call us. They'd driven Reg to a bowling alley where his new AAU team was having a party for all family members. I'd urged the girls to attend, since they had to drive him anyway. This sort of event would've been right up my alley (get it?), but we were out of town. Bowling and eating free PIZZA, what's not to love?

They were miserable. Someone's little sister cornered them and begged them to bowl with her and they felt out of place not knowing anyone. I was like THIS? THIS IS WHY YOU CALL US IN EUROPE? I barked at them to solve their own problem and to tell the girl that something came up and they weren't going to stay. Or eat the pizza and bowl and chill out. Goodness.

Am I the only person unpleasant when hangry?

Our Airbnb, once the heat worked, was the perfect location. To get there we opened a large wooden, arched door, and walked down a dark cobblestone path - directly off the main square. It reminded both of us of the Pirates of the Caribbean ride at Disney World. Coach was impressed with my Airbnb selections. I grinned and nodded, knowing I spent a little more on the accommodations than he would've. What one doesn't know, doesn't interfere with their enjoyment of said accommodations, right? Honestly everything in Prague and Budapest was so reasonable, I felt it was a good deal. Well worth it. The Vienna place was just plain pricey, but it certainly made things easy to be right in the thick of things.

We saw much more than I saw when I visited Prague in college. We ate well. One meal I ate was fabulous and I ordered a 2nd glass of wine. How wild is that? Oh, have I mentioned - I drank wine with most of my dinners. This is not normal for me, but when in Rome Prague (Vienna and Budapest).

We thoroughly enjoyed a free walking tour with an excellent guide, who is an American. He was a cheerleader in college and moved over there to coach a cheer team, I believe. He loved it so much that he decided to stay.

We took a scenic boat cruise. Hiked to the castle - this is the point when I threatened to toss the phone, if Coach continued to follow unreliable Google Maps. That day we walked over 10 miles. Traveling can be exhausting.

Another day we took a tour of the Jewish museum. It ended up being several different buildings, which we didn't realize. We made it through some of the buildings and were saddened by so many of the stories. We also visited the Communism Museum. It was very interesting. I could have spent a few more hours there.

The cobblestone town center /square with the amazing clock and the little figures that move around was beautiful. That part I remember from my '91 visit. The little winding roads between the buildings with the red-tiled roofs reminded us both of Disney World. It was all very picturesque. The morning our Airbnb host drove us to the airport it rained. He explained that we'd lucked out - the weather had been incredible while we were in Europe.

One day we decided to get lunch from a stand in the square selling huge chunks of ham. It also offered an enormous caldron filled with potatoes, cheese and what else I wasn't quite sure, but I KNEW I needed to have some. Fortunately the man selling it managed to tell me in English that it had bread in it. I wanted it SO badly, but alas that would've been disastrous. Coach ate it with his ham and pretended not to enjoy it, while I ate ham solo.

One day I wanted ice cream, but I wasn't sure if they would sell it in a bowl since I couldn't have it if it touched a cone. I approached and meekly asked my question in English. The worker kept saying AHOJ, which sounded like AHOY. I didn't understand. I was getting flustered, he finally told me in perfect English to say 'hello'. I was taken aback and Coach was equally confused. I wasn't trying to be rude and I'm pretty sure I started with:  "HI, EXCUSE ME -DO YOU SELL ICE CREAM WITHOUT THE CONE?" But he either didn't hear me, didn't understand me, or he was having a bad day.

Eventually they made me a bowl of ice cream, but they made it in a cone twice first. I really do think I greeted them properly, but I'm sure I was hesitant and wincing while I inquired, because I often found it hard to explain my GF status. I was embarrassed at being corrected, but tried to enjoy my ice cream anyway.

If I have time, I'm going to draft a post for Wednesday about how I wasn't quite sure we'd be allowed to come home. The story is hilarious. 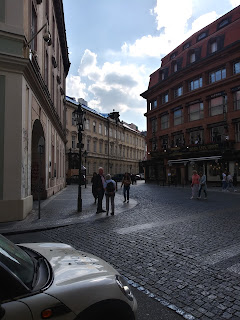 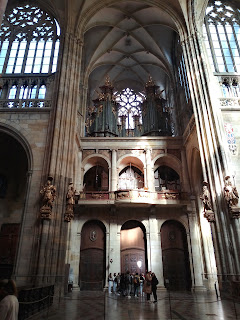 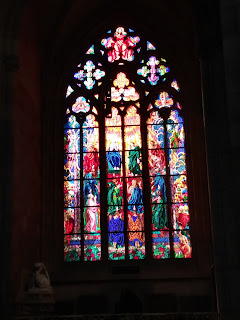 This looks/sounds like such a great adventure for you both. Aside from the hangry part...which I'm very familiar with.
I can see how your GF issue would be even more of an issue with a language barrier. Thanks to you, I know that ice cream is GF...I had no idea before. So, when all else fails: ice Cream.

I'm so glad that you guys made it home because I think we met up shortly after your trip, and I'm so happy that our meetup worked out.

When I'm hungry, I get really fussy. I'm not sure if that's any better at all.

One of my sons will call when we are on vacation--no matter where or when--just to chat. Drives me nuts. VACATION--when one is VACATING her real life.

I think you should have continued your Wine With Dinner habit upon your return. Sounds perfect. And GF.

Love seeing the pics and hearing the Prague stories, as it's one of my favourite cities. Could be because it was the first city my husband & I visited on our first trip 20 years ago. We have been back and loved it every bit as much. The Jewish museum is so interesting but difficult emotionally - also the Jewish graveyards in almost every European city -- they are crowded into on tiny spot. So disturbing the treatment of the Jews for centuries. On a happier note - yes you have to have wine with every meal in those countries - it's so good & so cheap! My sister has celiac disease and when she travels has a sheet with the translation into every language she will encounter -- celiac is global so most restaurateurs should be familiar with gluten free once they understand -- maybe that will help on your next European trip!

Suz - Yes, when in doubt ice cream. I feel like that applies to more than just the GF people out there. Ha. Although some ice cream, like cookies and cream, does not fall in the acceptable category.

It was a fun adventure. Lots of history over there. Super interesting.

I am glad that we made it home despite the trials and tribulations that cropped up. It would've complicated so many things if we got stuck there. And yes, we did meet up right after our return. So fun!

Nance - In general, I'm happier when food is available. I like to eat at regular intervals. Why wait?

Laughing at VACATING her real life. Very true. I felt the kids should've reserved their phone calls for emergencies, while I'm relieved that there weren't any - then we can just chat about the awkward bowling things when I return.

Wine with dinner does sound nice and relaxing, but it would also probably put me to sleep or interfere with my chauffeuring abilities.

Pat - Yes, Prague is a wonderful place to visit. The Jewish graveyard was so sad - they kept piling bodies on top of other graves in order to fit everyone because that was all the space they were given. How awful.

I appreciate the travel tip for how to translate GF when in 'Rome' or wherever. I will have to remember that. Tank wants to study abroad in the spring. Not sure if we can swing another trip. I was hoping that he could go as a junior and Mini could go as a sophomore - two kids would certainly justify a trip over, right?

This sounds like such a lovely trip - aside from the grumpy vendor. How do you say "Chill Out Dude" in Czech?????

Beth - It was a very cool trip. We saw a lot - walked all over the place. Ha, not sure - but that would've come in handy.