My traveling companions knew better than to argue with my need to eat high end, and the rest of the trip was mostly top notch food . . . for dinner.

Lunch? Well, we were on our way to the Hapsburgs' summer mansion/estate thing after our walking tour on Saturday and we stopped in a cute area to walk around and eat.

We looked at dozens of menus, but were hoping to just get something to eat - not have a sit down meal. We walked into a place with pulled pork posted on the specials list in the window.

Me:  THIS IS WHERE WE'LL HAVE LUNCH.

My men-folk followed me.

The waiter when I tried to order the pulled pork:  Um, that was yesterday's lunch specials.

I fell to the floor, and pounded my fists on the ground like a good ole fashioned tantrum. OK, not really. But I wanted to.

I released the men from my grip, and watched as they skittered across the street to order a feast to be eaten in the sunshine. In front of me.

It was some kind of beef concoction, open faced, melted cheese. The works. They were in heaven. I was in pout-ville with a level of hangri-ness that is hard to convey. I'd already eaten all the snacks in my bag.

Ready made sandwich places had no 'just meat or a slice of cheese' without the bread partnership. It was a while before I could speak. Most of the Hapsburg tour I sucked on mints to try to kid myself into thinking I wasn't famished.

Anyway, the estate was mind blowing. Enormous - and just for the summer. I could only imagine the havoc my offspring would have leveled on a place of that size.  Dinner that night, another fab deal. The waiter catered to my every whim. After dinner Friday night, we went to a bar. Then Ed texted a guy who is a friend of a friend who is studying in Vienna. They decided to meet up at a bar. Coach and I went to bed. The next morning, Ed told us of his adventure. The kid he was gonna meet realized at the last minute that he'd forgotten to hand in a paper and had to cancel. Ed said he was already at the bar, so he stayed for a drink. A guy started talking to him, and when he left, the bar tender started talking to him. He said it ended up being a great night.

I tried to look approachable at bars when it was just Coach and I after Ed left, but middle aged people like us apparently don't look like all that interesting. Ed ends up talking to people in different cities in bars or wherever, all.the.time. 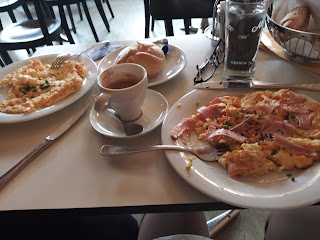 After that huge meal, I waddled along as we headed back to Pigeon Palace to grab our luggage and head to the train.

Great photos! I hope to one day visit Budapest. It sounds like such a struggle, travelling with Celiac. At least you got some good meals out of it, but ugh.

I bet the butterflies reminded you of Suz! That's who I think of too.

That comment was from me, but for some reason it went to my son's google account, just in case you were wondering...

So many beautiful things to look at! I love it all, but it would be hard to focus on anything good when you're hungry! I would have been in Poutsville right along with you.

The time mixups would make me bonkers too.

I'm so happy you guys could make this huge trip; what a blessing for the two (three) of you!

The food, you poor thing! I would have been right there with you in hangryville, I can't concentrate on anything when I'm hungry. You did get to see some amazing things, though, at least.

I thought that first picture was dip in a bread bowl just so you know where my mind is. I can't imagine being hungry and watching others eat. I'd be hangry too.

Your adventures in Vienna look like fun. I don't do well without proper meals. I get your frustrations.

Nicole - I cannot say enough about what a beautiful place Budapest is. I hope you get to visit. It was tough traveling with celiac, but those high end places were a delight. Yes, butterflies remind me of Suz.

Suz - It was a great place to visit and so fabulous to get to see Ed in a place where he was thriving. He was so proud to show us his favorite spots and meet his friends.

I try not to go to Poutsville, since it isn't anyone else's fault - but man is it hard to watch people enjoy food when you're hungry.

ccr - Yes, such great sights. I was a much happy traveler when I figured out that we just needed to choose to eat at nice restaurants.

Kari - Laughing at the bread bowl sighting. I see that. My mind can go to food in the blink of an eye.

Ally - Vienna was pretty and so different from Budapest. So cool that these cities are located so near one another, making it easy to see so much in a short time. Eating, well it's necessary so it did bum me out when it complicated things.