I make a grad video for my high school grads. Tank's was almost 45 minutes long. Mini,  my assistant, said:  SO WHAT IF GRANDPA COMPLAINS? IT'S HARD TO HIGHLIGHT ALL THAT TANK IS IN UNDER 20 MINUTES.

This video is the ending bit of Tank's grad video. I pulled this video from the VHS tape I had converted to digital a long time ago. I thought it was very fitting. Get it? ALL DONE, after 45 minutes.

I incorporate photos and videos clips from the time they are babies. Set it to music. It is a labor of love. They're fun to make and most people enjoy watching them.

For the first 3 boys, I put clips of when they were young into the video from the ONE VHS tape that I had transferred to digital back when I did a 50th anniversary video for my folks like 6 years ago. I chose that video because it had a bunch of cousins in it, not just my kids. I planned to someday transfer all my tapes to digital.

We bought a digital video camera a few days before we left for Yellowstone 2010. So everything after that is digital and is stored on my computer. Easy to access, etc.

1998-2010 was on small 8 mm tapes. I transferred some, but not all, onto VHS tapes. The most recent 8 mm stuff I never transferred to VHS because BUSY. Then the camera died, prompting us to get a digital camera for Yellowstone, and I had no way to transfer them. I figured I'd bring them to 'a guy' at some point.

Mini is tiny in that ONE tape I had made digital. I wanted to showcase her being chatty and active, so I decided to transfer the older tapes now so I could surprise her and incorporate toddler clips into her video.

I bought the equipment needed to do it myself. Hauled a VCR out of the basement. The VHS tapes weren't good. Mostly static. I took a deep breath, thinking - good thing I saved all my 8 mm tapes. I bought an older hi8 camcorder on FB marketplace. Thursday, my day off, I set it up. Played the tapes, attempted to record to my computer. Nothing. Huh?

I drove to the camera store that did my VHS transfer. She and I figured the camera I bought was messed up. I was still somewhat calm. She called me Friday with bad news. The 8 mm videos are messed up. They scroll, images overlap. I sobbed on and off all day Friday.

I have about 40 hi8 mm tapes that cover those 10 years. I took video of
EVERYTHING. There are parts that I know are on those tapes, like each time I brought a baby home from the hospital. Or the kids reaction when they met Curly and stood at the edge of my bed, taking bets about whether or not the baby I held was a boy or a girl baby. Then there are all the videos that I don't even remember taking. The kids messing around in the family room, etc.

As I write this, I am still in disbelief that all of those images can be gone. Camera store lady handed it off to another guy, but she didn't sound very encouraging that he could get them to play back properly.

I'm trying to remain positive. One thing:  I have my old camera. She wonders if the camera recorded the videos at a weird speed. Maybe if we send the camera to someone who can fix it (I found a place in Ohio that claims to fix them), the tapes will play back on that specific camera.

Was it because I stored the videos in my bedroom closet for years? Maybe the heat and humidity got to them, because my closet is over the garage and it feels like an attic in there. I found a place that works with humidity damaged tapes. In California? The cost is staggering, but they say they don't charge if they can't work with them.

I was meticulous. I labeled everything. Numbered the tapes, so I know what order they go in. I'm sore from kicking myself for not doing this sooner. My heart hurts. I feel like I've lost my foundation. I love and cherish those memories and to not be able to look back at my babies and giggle at their antics, pains me so very much.

Mini was like WELL, WE HAVE A MILLION PHOTOS.

True, but I want to hear those little voices, watch them roll around with each other. It's Mother's Day, and I have to say what a gift it is to mother these six blessings of mine. I've SO ENJOYED them, it's pure joy to watch them grow and say funny things, and note the way they change and listen to their little comments, etc.

On the positive side, I have most everything after 2010. I have one two hour tape that I turned to digital, but it doesn't include Reg or Curly. I also have a bunch of VHS tapes that I can try to make digital, but they are so full of static (see clip below), it isn't easy to watch. The color is gone. *The camera store said once they are full of static it is because the tape is deteriorating. No way to fix them.

Below, we still get the idea of what they are up to, but not the clear image I'd hoped for.

So, until I have exhausted all measures, I'm going to hope that I can figure something out. One thing, if I don't have a video of it all, at least it happened. Right? My kids had such adventures and so much fun together growing up. Lad assured me that they remember it all fondly and he's glad to have had the childhood that they had. Plus photos.

Since I'd planned this project for last week, I'd envisioned watching some of the videos with the kids on Mother's Day. I've pulled myself together (mostly) and am keeping busy until I know more.

People, I'd give my right arm to recover these videos. Good thing I'm a lefty.

Sorry to leave you wondering about what kept us awake in Vienna. That story is coming. This drama is weighing on my heart, so felt like sharing.

Hoping you all had a wonderful Mother's Day, full of relaxation, pampering, and time spent with your favorite people. I thought the below graphic that a friend posted on Facebook is well stated. I appreciate all of you and hope your day was full of joy and happiness. 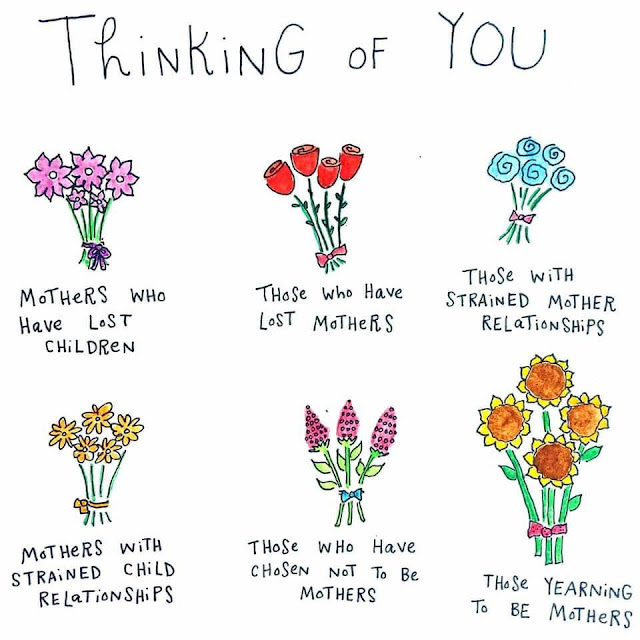 Oh no! Ernie, I would be so sad if that happened to me. At least you have the photos though. But wahhhhhh! How frustrating and sad.

All mothers understand your pain over this. Heartbreaking. Your kids are such good sports, and they are right (must have had a smart mom!) but I hope it can be salvaged!!

That is so disappointing Ernie. Hoping one of the ‘specialists’ you try can resolve the problem.

Oh no! How upsetting. I hope the specialist can work some miracles for you.

I'm still hoping that you can get some of those memories back. Even though that one was staticky, you can see a good portion and hear those sweet voices.

I love that Lad said it wasn't a big deal because they remember all the good memories. How sweet is that?


I hope you had a great day with (most at least) your kiddos!!

I love looking at old pictures and watching our home movies and would be so sad if they were lost! That really stinks. Maybe there is some still salvageable in there?


We have a lot of footage of Anna but not so much of Ella. AND WE ONLY HAVE TWO CHILDREN. So I admire you for having so much video of all of your children. That is a significant amount of work.

I'm sending you a big hug. Because I wasn't on the computer all weekend, I'm attempting to catch up on all of my blogs today. I hope you had a wonderful Mother's Day! XOXO

I don't know the first thing about videos and how to save them and how to have them restored, BUT if there was ever a woman to figure out a way to get them back, you are she. Still, you were trying so hard to be organized that this seems like a huge slap in the face. I'm sorry.

Oh no! Crossing my fingers that somewhere there is a solution.

All - Thank you for your comments - let's keep our fingers crossed collectively. I'm bolting to drive out to Omaha - part way tonight, rest of the way tomorrow. Excited to have this kid to myself for a 6.5 hour drive tomorrow. Getting there, ugh. Will be happy when the drive is over. ;)

Oh I'm so sorry! That's so upsetting. I'll pray it can be resolved and you get at least some of the videos to be recoverable.

Keeping everything crossed that you’ll be able to get the tapes fixed.

I'm so sorry. 😞 I hope there's something you can do to save them.

Oh my goodness, that would be absolutely devastating. I hope someone can figure something out. It's really impressing all the labour you've gone to to transfer the tapes - we have an old camcorder around somewhere and I have no idea how we'd get the stuff off it. I feel like our kids just missed us being able to record everything on our phones, and I'm both bitter about that and a tiny bit glad because I would have felt compelled to record literally everything and that might have been a bit much.