Tank had orientation in Omaha a few weeks ago. We had to sign up in early May. He was hesitant to commit. Because of covid, high school volleyball season started late and finished late. He didn't want to miss playoffs.

I kept checking the link and the four available sessions were all still green the day after they opened. Later that day, Tank agreed to let me register him. In hindsight:  I wish I'd signed him up and then cancelled later if we couldn't go.

I booked our flights. Then I pulled up the calendar on the college website where the dates were all still green - as in available. I clicked on the first dates that we'd decided on:  June 7th/8th.

The website alerted me that the in-person orientation was full for those dates, only virtual was left. WHAT? Then how about you don't have the calendar date highlighted in green for AVAILABLE on the previous page. I decided not to panic. Surly the school would make space for us, we'd just booked flights and the green/available message was VERY misleading.

No cigar. They put us on the waiting list for the 7th and for the 14th. I signed him up for a session on a Thursday/Friday the following week that still had in-person availability. It'd be much harder for me to be away those days though.

*The school changed the website shortly after I called so that the initial page let you know whether or not in-person was closed.

I booked lots of flights. Two on Southwest, knowing if I cancelled I could get a credit for Tank to use sometime in the next year. The rest were using frequent flyer miles which could be put back if I cancelled. On the counter, I kept a hand drawn grid at my fingertips so I'd remember what needed to be canceled. I love things that are simple.

We got off the waiting list and ended up attending on the 14th, a Monday. No one caddies, so less chaos. Plus we were gone on a Tuesday when Coach is fairly flexible. Our flight out there cost a ton of miles. *sobs softly* Apparently Omaha was hosting Olympic swim trials. Maybe that drove the price of flights up? Hotel rooms were pricey too. Our flights home were the cheapest I'd bought - on Southwest, so that was a bonus. Or so I thought (my next post will reveal how we actually got home).

Orientation itself went well. Minutes after we arrived, I walked past a woman who looked so familiar.

Me:  Tank, I think that woman works out in the same classes at the health club.

When she walked by, I stopped her. It took her a minute to recognize me without a baseball hat. She was like: HEY! We didn't really know each other, but we do now. She lives a distance from the health club, so our sons went to different high schools.

At these events, they whisk away the students. It was nice to have a buddy to hang out with and attend the various presentations with. I felt a tad guilty for not trying to meet other parents. Reminder:  I've met other parents at orientations and I never saw them again. This is my 3rd orientation and  my fav. They did a great job of delivering the information. Shockingly not boring.

Part way through the director of housing's presentation (that we both attended but weren't sitting together), Tank texted me:  OMG THIS LADY REMINDS ME SO MUCH OF MINI. 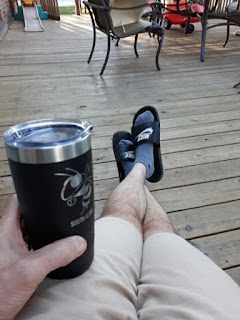 The woman was very animated. She was trying to sell everyone on buying linens from the school to fund special programs. "I still remember the color scheme my roommate and I agreed on: Lime/coral."  This was followed by a sort of snort laugh.

The few days away were fun. Before we left to go to Omaha, while we were waiting for our plane, Tank shared a text he'd gotten from Coach. Photo of Coach chilling on the deck. He's wearing Tank's slides and drinking from the tumbler the high school gave Tank at graduation.

The message:  TANK, IF YOU WANT YOUR STUFF BACK, BE NICE TO MY WIFE.

That must be so frustrating, booking flights then finding our their website isn’t up to date! I'm glad you can get credits. We are STILL waiting for credits from Air Canada for flights in July 2020 that were cancelled due to Covid. And it’s a LOT of $$ as we had booked 20 flights to Portugal (for our entire family...spending their inheritance:). Love coach’s sense of humour.

I remember my college orientation. Parents WERE NOT ALLOWED. This was 1996. I drove myself out there, with a friend from high school who was also going to the same college. If you got dropped off by a parent, it was literally, they dropped you in the parking lot and the school people waved goodbye to the parents. Really trial by fire- find your room for the weekend, find your testing site (placement tests), etc.

Coach has a great sense of humor! Glad everything worked out and you were able to attend orientation! Peter's orientation was online and so incredibly boring.

Pat - I think Air Canada needs a stern talking to, and with my track record I'm about to offer to be the one to deliver it. My kids and Coach all bow down to me when something runs off the rails and I 'make the call'. I'm blown away by this situation. Coach has developed quite the 'dad jokes' sense of humor which I find sort of annoying - especially when my kids laugh but won't laugh at my AMAZINGLY HILARIOUS material. But this photo with message made me bust a gut in the airport.

Kara - I remember my college orientation. Parents were allowed, but it wasn't all that comprehensive. It was more of a drop off situation with a few bonus talks if you were interested (travel abroad, etc.) that ended with a mass. My folks were in a hurry to get home so they didn't stay long. My dad pulled away as I stood on the steps of the dorm waving. He rolled down the window of our '76 Chevy Impala station wagon and hollered: THREE DOWN, TWO TO GO! I pretended I didn't know who he was and marched back into my room. Nowadays orientation happens early in the summer. So different.

Beth - I literally ran into a woman that I attend workout classes with at orientation. I knew her to say HELLO and that was it. We ended up spending the entire time together (as the college kids were whisked off into small groups) and it was delightful. I don't think her quiet guy and my future Chris Farley will hand out much in college, but nice to meet someone from our area (they weren't from the same high school). Yes, this photo made me laugh. Tank is a funny guy, but he does need to be reminded to be considerate. AS in, hello son- I know I'm super strong, but lift my damn bag out of the trunk of this cab you Neanderthal.

You and your travel plans....do they ever go smoothly? Easily? I think not.

I've only been to two orientations and they weren't that exciting. Especially the second one since it was for the SAME school two years later; I believe I skipped some stuff and went to the mall. It was like High School again for Suz! HA.

Coach is funny---I hope you guys had a nice time away. And you running into someone that far away that you 'kinda' know; priceless.

I was just thinking what Suz said! Can't things ever go as planned?

I recall at Man-Child's orientation they separated us from the get go. The parent meetings were exceedingly dull. So much so, I skipped the second day and explored the town.

Suz- I am beginning to wonder the same thing. Arizona was fairly smooth sailing, thank heavens. But, more of that please.
Kicking myself that we didn't just drive but I feared I would be NEEDED at home in June and wasn't sure it would be great for me to be away.

This is my 3rd orientation. 3rd school and it was my fav. Probably helped to have a buddy but the school also did a good job keeping sessions short, and often entertaining.

I laughed harder than Tank at Coach's message. Shock.

Nicole- It was just so unexpected. There was no blizzard. Why cancel my flight?

Yes, Coach occasionally makes a funny. This one hit the mark.

Gigi- As boring as those things are, I don't think I could skip them. I guess I am a REAL rule follower. I would worry I would miss something. I met a few parents at ed's school and that was just silly. His school is a big ten school. I will never see those people that I met again.

Making travel plans is an act of faith. I'm glad it all worked out for you, but a little more detailed info from the university up front would have been in order. I like Coach's text to Tank. Nothing like a fatherly reminder to be nice-- or else.

Ally - I suspect that this was the first time the college did a hybrid orientation. It didn't occur to them that when the in person filled, they should set the webpage to alert people of that. It was a pain in the neck to say the least.