Before I left for the out of town hotel-  followed closely by AZ, Curly took this video of Wilhelm shadowing me during my workout. He makes it look so easy. Actual names are spoken here. Too cute not to share.

Mini watched Curly's dance competition all day from home on the livestream. She's usually with us, so this was unchartered territory. She was technically babysitting for Wilhelm.

She video chatted with us a few times throughout the day. Each time as we shared how the day was going and who was a standout dancer, Wilhelm's large head would suddenly appear RIDICULOUSLY close to the screen - inserted from the side, as if he was floating. Slightly creepy. I wish I'd taken a screen shot of it, because Curly and I were doubled over.

Wilhelm apparently dug out a toy laptop that no longer works and set it up next to Mini's laptop on the family room floor.  Once when a dancer fell on stage, Wilhelm said in his robot tone:  BYE-BYE, ALL DONE. Mini died.

Mini said most of the family huddled around her laptop and saw Curly's final round. This prompted the males of the family to send texts and question why she hadn't gotten more air-borne. Curly just rolled her eyes and explained that that's not the kind of dance for flying around the stage - more about footwork.

Mini and Ed stayed up late, thanks 2 hour time difference, so they could watch the awards. Ed later said as they rattled off the world qualifiers, he was worried they were going to reach 14 dancers before they got to Curly's number. Welcome to my world of Irish dancing induced anxiety. 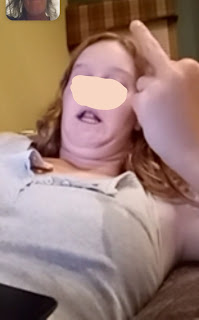 Mini video chatted us as we walked back to the hotel after awards.

Me:  PLEASE STOP SENDING ME SCREENSHOTS OF ME HUNCHED OVER MY CAMERA, YOU FREAK. (Then I took a screen shot of Mini flipping me the bird).

I was super tired, but Curly was bouncing off the walls. I finally begged her to let me take off her wig, which is usually the first thing she wants to do. Too excited.

Once back home, Tank stopped at Nothing Bundt Cakes and brought Curly home a treat to congratulate her. Very sweet and unexpected from Sir-joke-a-lot.

Has anyone ever snapped photos of you when you weren't aware you were being photographed (ie the livestream photos Mini took of me)? I think it could be considered a form of cruel and unusual punishment.

Blogger was being difficult because I was trying to add so many photos to this post . . . so they are bringing up the rear.

Awww, I love how excited Tank and Mini were for their sister! So sweet. Congrats again to her, and that dress is fabulous. How exciting! Wilhelm is pretty adorable too :) this was fun to read!

That video of Wilhelm is so sweet. I love how excited and supportive her siblings are!

Nicole- It is sweet to see the siblings rally for her and suddenly ask about specific rounds. "Why not more bouncy there?" Oh my gosh, that little guy is quite the imitator. Particularly with his speech.

Martha- Glad you enjoyed it. Oh and the dress is phenomenal. The guy we use is fairly new and we love the classic styles. Still it arrived too small. Several issues with the fit and we did a zoom where I measured her. She has a pretty simple shape- nothing unelected. Athletic. Tall build. He has agreed to have us send it back to be fixed. To Belfast. Just one more thing to do. She doesn't need it till the comp at Thanksgiving. Still, a hassle . . . and it was incredibly expensive. Of course.

Pat- He once took you vegetables and used them as if they were his weights. Pretty hilarious. His huffing and puffing right on par with a tough workout.

Thanks- it does make my heart proud when the whole gang cheers for her. Even when Molly was a dancer, she never let Curly's success frustrate her. Pure joy. I think we just got lucky. I grew up jealous of every sibling accomplishment . . . and they were plentiful.

The video is precious! The siblings cheering on Curly is heart warming and that dress is stunning.

Gigi - Yes, glad Curly was around to capture that video. Even though the brothers wish she'd focus entirely on basketball, they all cheer when she does well. It's very sweet.

Wilhelm is adorable. I do get a kick out of seeing toddlers exercise. So determined, so easily knocked over. I'm glad the new dress worked out as planned. As for "Has anyone ever snapped photos of you...?" Yes, and it was disconcerting... but harmless I suppose.

Ally - It is easy to forget how challenging he is when he does something cute. Per my suggestion, the mom has finally had him assessed and he'll start speech therapy in the fall which should help with his 'echo' something or other that he has going on. As you can see, he echoes more than just speech. Mini was clearly entertained by her screen shot ability when I wasn't expecting it. Goofball.

I'm not a fan of most photos of myself lately, so NONE are to be candid. I love that the whole family was supporting Curly! Bravo
The DRESS is amazing!

The video of you and the little one exercising is so cute and him with a 'play' laptop; too stinking cute.

OMG, Wilhelm, the cute! It is sort of annoying how a brother doing something sweet for his sister once in a blue moon is so freaking impressive, but it totally is. And yes, those pictures people take of you without your knowledge are a crime against nature and decency. We have a mutual pact among my friends that those pics never see the light of day.

Suz - Thanks - yes, it was great that the kids were full of HIP HIP HOORAYS for Curly . . . especially since most of them want her to quit dancing and focus on basketball. Oh, the dress. We do love it. It's a hot mess of mistakes, unfortunately - but love it. Someone just bought her last dress and we loved it as well. When we check out the pages and pages of dresses for sale, we are shocked that people took so long to buy her last one . . . because the ones out there are UGLY, mostly. Wilhelm is a trip. Curly and I enjoyed him much more when we was photo bombing Mini's video chats with us than we do in person - although his joining of my workouts is funny.

Ali - Yes, that little dude can really get to me because he still ONLY REPEATS language rather than use original statements, but he starts speech therapy in the fall. Hooray. So when he decides to be entertaining, we rejoice.

Tank carries off the funny as shit façade quite impressively, but he's really all feelings . . . well, feelings and laughs. I hear you on the 'aww look what her brother did', but so glad he did. He might remember that Curly sobbed and clung to Eddie when he left for college, so maybe since he leaves in weeks - he's trying to score some points. ;)

'Crime against nature' - goodness, so true and hilarious.