Guess what I got? And fun with Coach

Hope you all had a Merry Christmas. I have four words for you:

If you haven't seen this hilarious video clip shared by my dear friend and hilarious blogger, Suz, please check it out now so you understand the significance of my robe gift. I'll wait. 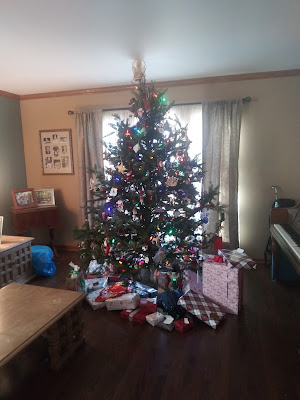 I couldn't stop laughing after I opened the robe. After everything was opened (thank God we don't have a dog. Turn the page, join us. I'm not anti-animal, just allergic and still referring to the above clip), I shared the SNL video with my people. They laughed their butts off too. Maybe a little bit too much.

I haven't worn a robe in FOREVER. Curly thought I needed one.

I throw on workout clothes the minute I wake up, so no soup for me no robe for me. Back when I spent half the night breastfeeding someone or massaging someone else's knees (*explanation below), I threw on my robe and then showered during the 10 am showing of Sesame Street. Sweet Jesus, thank you for Sesame.

I'm not sad that my robe-wearing days are over - born of a too-tired-to-function necessity. Lounging sounds delightful, but it isn't in the cards for me.

(*explanation:  looking at toddler Ed here with the constant TAP TAP on my shoulder in the middle of the night, "MOMMY, MY KNEES HEWRT." No joke, I sometimes hauled the world's largest baby aka Tank into Ed's bed where I served double duty:  MILK FOR YOU AND IF YOU LAY BEHIND THE BABY AND PUT YOUR LEG UP HERE I CAN MASSAGE YOUR KNEES TOO.

HELLO, Ed's father is/was a PT . . . guess whose tired-ass self finally dragged Ed to the doctor? Not coach. Ed needed inserts in his shoes for his knock-knee issues. Ahem, and guess whose side of the family that trait stems from? Not mine).

Coach and I don't really exchange gifts. So I thought. He always says he doesn't need anything. I get him a few things. Like Peter Millar pants. Bought on sale. Can't resist those. I mean when they're on the sale rack, not on Coach. OK, maybe both.

I bought him a file crate (in addition to Millar pants). I hoped it'd clear up the paper/journal organization nightmare that surrounds his recliner. He started to set it up but was like:  WAIT, WHERE DO THE FILES GO?

Me:  Well, you get those hanging file things. They hook on here . . . (trails off as Coach becomes annoyed). What?

Coach:  Those don't work (SAID NO ONE WHO KNEW ANYTHING ABOUT ORGANIZING EVER).

Me:  OK then. Send it back, but figure out another system because your papers can no longer be kept all around your chair.

I then sashayed around the house spreading more Christmas cheer.

On the 20th Coach and I went to church before the kids were awake. I broke out some new booties I bought myself. They're Josef Seibel. Feel like slippers.

Coach:  Are those new?

Me:  Yes. I bought them yesterday.

Coach:  What? You got them yesterday? Why wouldn't you give them to me to wrap up for you? You usually do that.

Me:  Um, because you still end up taking the kids to get me something at Target. (translation: he is fooling no one here. The kids KNOW he doesn't shop. He says the kids insist on coming up with ideas for me and they want to be involved in shopping for me . . . SO WHY ARE WE STILL FAKING THEM OUT WITH THE STUFF I BUY MYSELF AND WRAP MYSELF?).

He's a man, so the mystery element here is implied.

In addition to the robe, I opened my booties that I took off in the garage and hid in Ed's locker after we got back from church until Coach could wrap them. Curly was awake in the kitchen when we got home, but didn't question why I was entering the house in my socks.

On Christmas Eve, he couldn't remember where he hid my booties for a little while. I was like -  why did you bother hiding them? He's a wonder, and he's all mine.

After I opened a sweater (something I also bought myself), Coach hopped up to turn the oven timer off in the kitchen.

The kids all leaned in close and shout-whispered to me:  WHY DOES DADDY DO THAT? WE KNOW HE DIDN'T BUY THAT FOR YOU.

Mini:  I was with you when you bought that.

Me:  He thinks he's fooling you. (eyerolls all around).

Coach also got me a desk chair. Previously my PT husband directed me to balance on a  giant yoga ball while I type. Necessitated by low back pain after sitting on a chair. The question:  why is my PT husband now advising me to sit on a chair? It hasn't been assembled yet. I'll report back.

A potentially hurtful drama with my side of the family put a damper on Christmas evening. Twas a misunderstanding that was straightened out the next day. More later. During the icky-feeling, my kids and Coach were super supportive which restored my temporarily misplaced warm and fuzzies.

In good news:  The used shit I bought all worked out, the kids loved their stickers from Red Bubble, I've slept like a log  3 consecutive nights, the laundry is all caught up (not sorted, but clean), and we've been eating huge delicious meals as if we might lose the privilege of eating very soon.

Added bonus:  enough leftovers so that I do not have to cook all week.

There's something about the days after Christmas. My Mom friends and I were talking, and it turned out that at least five of us crashed early on 12/25 and slept for an unheard of 10 hours in a row. I think it's the stress of being responsible for Holiday Cheer being let go, so Moms can finally sleep.

Kara- I would agree. I think my exhaustion can also be attributed to food prep. I made a huge breakfast AND dinner on Christmas day and then I made a huge dinner on the 26th when we hosted my sister and bro in laws.

Those booties ARE cute, and I'm so glad all the used shit ended up working. My husband usually buys me presents, but he was SO busy working this year and I was the only one really leaving the house, so I bought stuff for myself and gave it to Eve to wrap. He felt bad, but it felt like a win to me. I crashed hard at lunch on Christmas Day and Matt did the turkey (my parents were bringing the sides). I forgot to save anything in the tank for actual Christmas Day, and trying to sleep has been absolute torment lately. I felt guilty, but everything worked out.

You got a robe! I saw that skit on SNL and laughed so much. They also have a skit about Pandora bracelets, which I have and love, but the skit is hilarious. "It's a coffee cup?" "Because I noticed that you drink coffee." Merry Christmas, glad it all worked out!

"I then sashayed around the house spreading more Christmas cheer." ---IN HER ROBE! YOU CRACK ME UP. How funny about the robe and the video timing.

Your boots are adorable and I'm glad that your Christmas worked out nicely (well, aside from the hurt/misunderstanding part)
I laughed at Coach and his shopping/non-shopping. He tries. Right? In his own way, he does try, but yes, 'he ain't fooin' anyone'.
Yay for all the gifts that worked out. You need the sleep after all the work you've done for your family and lest we forget how much you've made ME and others laugh so much this year. Rest up my funny friend!!

Ali - I was kind of having buyers remorse about the booties even though they were really marked down and the store was having an additional 20% off. I felt better knowing it would 'count' as a gift for me. I really haven't been buying much for myself lately. The year I was about to deliver Reg, Coach gave me a book his patient claimed was funny - when really it was insulting and offensive. (instructions on how to stop being a whining housewife) If he had even bothered to open it and read one page, he would've known. My cousin had just been killed in a car accident 2 weeks before Christmas. Hormones and emotions were heightened. I told him to NEVER shop for me again. I really don't mind that system.

Sorry your sleep is not cooperating. That's the worst.

Nicole - Oh, I can imagine how funny the bracelet skit would be. I'll have to check that out. That robe skit killed me. Down to the 'don't take my picture' part. Been there! Hilarious. Merry Christmas!

Suz - Can you believe he's sending back the filing cabinet? Ugh. He worked hard to get his stacks of paper cleaned up before we hosted his bro and sis on the 26th. The adults really hang in the kitchen and the dining room anyway, but long-term I want him to get a system. Dang it. I have a few toddlers who occasionally rummage through his filing system. It.Must.End.

The kids were fooled about Coach's 'gifts' when they were younger, but nothing gets past them now. After breakfast Mini whispered to me: DID YOU BUY CURLY'S IPAD USED? Um, yes. Or there'd be nothing under the tree for anyone else You're welcome.

Happy to make someone laugh - in my neck of the woods I'm constantly reminded that I'm not funny. I know, they're just too cool to admit that I secretly have them in stitches. ;)

Dan and I don't typically exchange gifts but when he does give me something it's either something I've mentioned to Sarah that I like or that I have specifically said "THIS IS FABULOUS AND WOULD MAKE A WONDERFUL CHRISTMAS PRESENT FOR ME!"

Gift giving is definitely not Dan's love language but it's not mine either so it's good that we both have low expectations!

Beth - this sounds very similar to Coach and I. Neither of us tend to be amazing at gifting. I know people who are, and despite the play on words - it is a gift!