where is his leg? & envelopes are done

First off, let me just share how freaking happy I am that my envelopes are printed for my cards.  A few printed cockeyed and I recognized a few as having an outdated address as they spit out of the printer, so I have a bit 'o fixin.  But HEY - me wrangling almost 200 addresses into a mail-merge for envelopes is always a CHORE.

And my Christmas poem (longest to date) is at the printer and I am crossing my fingers that he emails me tomorrow to say that I can come and pick it up.  Because . . .

I have the day off tomorrow and I can go pick them up.  I sit Mon- Thurs this school year but I only have one baby on Mondays.  His folks are delightful, appreciative, and very sweet BUT . . . I so wish that they would use me Tu, Wed, Thurs vs Mon-Wed so that I could have BOTH Mon and Fridays off.  Sigh.  They switched things up this week, which is joyous because I have so much to do.  I had the day off on Friday but it turned out to be a huge frustration.  I will describe that fiasco in another post as it is solo-post worthy.

Snapfish mailed me my cards and envelopes with the return address on the back flap.  I usually print return address on the front of the card when I run them through my printer.  I am not really liking that Snapfish opted to print this without running it past me.  They took the liberty of using my first and last name and our address, so it looks like maybe Coach and I are no longer together.  Just weird.  As I was begging my printer to stop printing things kinda crooked on occasion (like 2 every 60 cards, and oh - I have had much worse printing experiences, so I am coping), Curly came in to say good-night.  She wanted to look at the poem, but settled for the card.  Imagine my surprise when she said:

'HOW COME REGGIE ONLY HAS ONE LEG IN THIS PICTURE?'

The front of the card is one photo of the kids.  The back is several pictures in a collage.  One photo is of Coach and the 4 boys in Vancouver at the garden where the kids were forced to eat the one meal out cafeteria style like their pants were on fire, member?  Anywho - Reg is kinda tucked into the shrubs in order to fit in the photo and it looks like his one leg had been amputated.  I am raising a family of blinkers (like their father before them), so I never thought to check that everyone appeared to have their limbs - only looked at faces.  Despite the stress of feeling stupidly behind this year, I HOWLED with laughter!  Oh.  my.  gosh. 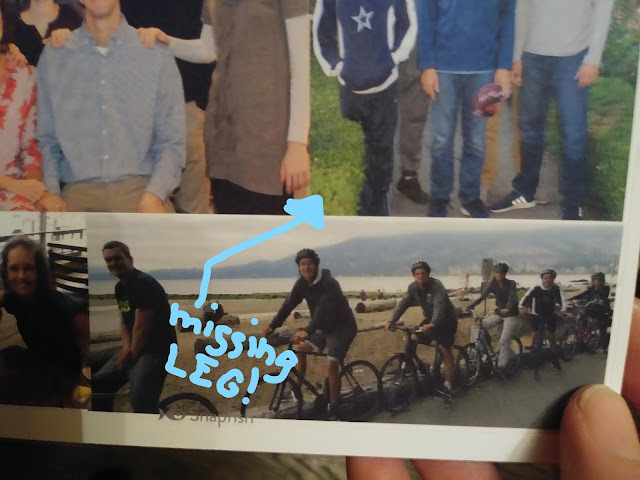 I am a tad slap happy now because of the 220 cards featuring my son with the trick-leg, the - "Hey, so we split up" address-flap-tease, and the relief of essentially having the envelopes printed (mostly . . . damn those people who move and mess up my address file).

I still have much to accomplish, but in other exciting news:  Coach and I went to the grocery store today.  I gave him part of the list.  VERY well organized and in order.  We have done this a few times in the past.  He usually texts me when he is done and I tell him my status or give him a few additional items.  One never wants to ask too much of a pitching-in hubby, right?

Today he texted me to say that he was done and that he was in THE CAR.  I was like, 'Huh?'  He let me know that when I was done, he would pull the car up to the curb.  Such service.  I assume he wanted to listen to the Bears game in the car.  Um, he spent about $100 and I spent over $425.  I did buy lots of meat for dinners now that the everlasting batch of chili is gone (that will make more sense in the next post - I decided to divide my ramblings so as to make it manageable in case you all need to wrap or shop or bake).  Anyway, I have two hungry college kids coming this week.  Still, that's a lot of groceries.

Good thing December is not expensive or anything.

Have you ever sent a card with a typo or a funny photo or something else you overlooked?  Mini CANNOT believe that the two of us missed the leg thing.  We put the finishing touches on the card LATE at night the day we drove home from the Irish dancing weekend.

Tell me I am not alone here on the 'oops' cards.

I stopped sending cards two years ago and it is the best decision I made for my sanity ever.

I am still waiting on my cards from Snapfish....nothing like waiting until the last minute! Hopefully they will be here Wednesday so I can get them in the mail on Thursday. Dan and I are flying out on Friday morning to go to Massachusetts to see the Patriots game. Hopefully everyone has their legs in the picture because they are going out regardless. I always do labels and use mail merge and it always takes me forever to remember how to do it. Hopefully it will go smoothly this year. That's on my list of things to do tomorrow.

I've misspelled my husband as Framk, instead of Frank. Used the wrong year - 2016 instead of 2015. I found that using clear labels and sending a whole sheet of them through the printer is a LOT easier than printing on envelopes.

I'm with Kara on the clear labels - just finished my cards this afternoon. Using the labels for both the return address and the list of addresses. Also, I have pared my list WAY down to about 20 cards - so I don't even bother with the mail merge as I just save the labels from year to year - making tweaks as necessary.

I LOVE that you have messed up cards; it's real life. Over 200 cards?? really??? Do you get that many back? I sent out about 45, I think, and I was thrilled to drop them in the mail on Monday. One year (2013?) I used the wrong year. I put something like I hope your 2012 was great!!. It was part of the card and I had to redo them. It was kinda funny now that I think of it. Surely at the time I was having an aneurysm.
p.s. I'm really sorry about you and Coach. I'd tell you that you'll do better next time, but we both know you won't. ;)
p.s.s I cracked myself up with that.
p.s.s.s I might have cracked the code on commenting this very minute!

Oh....wait. You changed your comments to a pop up window.
YOU cracked the code. Not me. :)

Suz- I DID change my comments from embedded. I have had a couple other blog friends say they could not comment on my blog. So maybe this will be the answer. But now I cannot reply to the comment as they are left . . . only at the end. Maybe no one will care.

It took me a minute to get the 'sorry about you and Coach' remark. I was like, 'shit I know it was late that night but WHAT did I write?' Ha!!

I do not get that many back, but there are people who are old or don't send cards and they tell me how much they look forward to my card/poem. The kids' friends families add quite a few. I do not even come from a typical 'big Irish family!'

I don't think I've ever screwed up on a Christmas card, but please enjoy how badly we screwed up on my daughter's first passport: https://tinyurl.com/usmggrb. I'm impressed (as alwasy) by how organized you are re the printer and Christmas cards - I do it all by hand, which is probably why my hands are really unhappy right now. Also, one summer when my husband was coaching Angus in baseball, he was always at the diamond with Angus and I was off doing stuff with Eve, and somehow one of the other parents got the idea that we were separated. At the year end party she said "I hope you guys reconcile, you're good together".

Oh, and for school pictures one year Angus wore a shirt we'd gotten him in Mexico - none of us realized that the word "Tequila" was featured prominently, and ended up front and centre in the photo. Mother of the year.