This couple leaned towards the odd side.  The woman, Jackie (her real name, because if you know her then I want you to tell her what a lowlife she is), appeared to have difficulty executing conversation.


Our first phone call took place when she called me while I was at a department store.  The lengthy pauses left me wondering if we had been disconnected. I kept pulling my phone away from my ear to look at the phone, checking to see if the call was still in progress.

When Jackie did speak, I cringed at her monotone, dreary voice.  Perhaps I should not make fun, because maybe she took a bad fall on her head as a child and cannot infuse inflection or feeling into her tone.  My grandmother would have called her a 'drip'.

She and her husband came to meet me at my house, and I was shocked at his strange communication style. He spoke entirely too fast for someone to process the words. His quick adrenaline-infused speech came out in quick bursts and then abrupt ends.

I showed them the play area in my basement where the water had come in on Curly's stage. The stage had yet to be put back together, and I explained about the window well water seepage. Words bolted out of his mouth about what we should do to fix it. It took me a few minutes to figure out what the Hell he was referring to. Now, who's the drip? Seriously though, how do these two communicate?

On Labor Day this woman, and I use the term loosely, whose children were scheduled to arrive at my house the next day sent me a cryptic text message.  Her text arrived almost 36 hours after I sent a text to her inquiring about a few details. Did the toddler still nap in a pack and play?  Had she managed to grab a second car seat for my car? Did she still plan to arrive around 8 or 8:30 in the morning?

The fact that she was about to leave her kids with me, but was not more responsive to my questions raised a red flag. READ TEXT MESSAGE SCREENSHOT HERE: 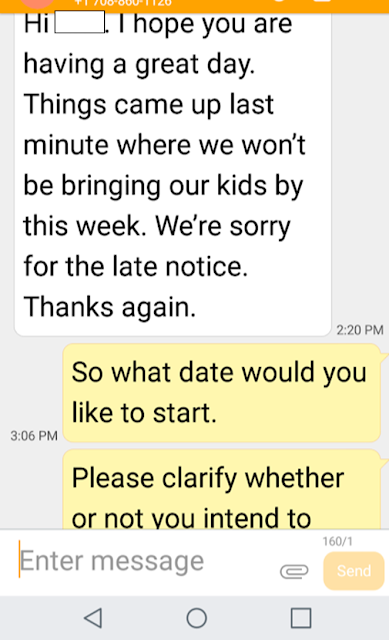 What?  So if they weren't starting tomorrow, then why did she not mention when they would be starting?  I texted her and asked for what date she hoped to start.  She did not answer my text messages or my first three phone calls.

I was at the pool. Enjoying the last day, until she finally called me back. In her drippy, monotone voice . . .

she said: 'Well, we met someone today who can watch the kids the week that you can't. And she can watch them for the rest of the school year.'

Me: 'But you ALREADY HIRED ME TO WATCH THEM FOR THE SCHOOL YEAR!'

Perhaps it isn’t just her speech that is void of feeling, but her entire person.

Oh no!!!! That's definitely not a good way to start the year! How do you always get such crazy people????

It sounds to me like she has some sort of personality disorder. I've met a few people in the last few years that hit me strangely and that's what I summed it up to be. They're different and have a lack of social cues. Weird.
So, they were a no-go for the entire year then? I can see why you're frustrated when you were counting on them. Bastids.