This is the next bit of our adventure portion of our trip to Vancouver:

5.     Grouse Mountain:  Coach read about this in a tourist book.  Very popular thing to do.  You could either hike up the mountain and take a gondola down, or you could take the gondola both ways.  At the top of the mountain there were all kinds of cool shows and things to do.


The book described the climb up the mountain as suitable for avid workout types.  Um, they left out the rest of the phrase:  avid workout types who are in fact CRAZY!  I workout daily.  I run or walk about 5 miles most days.  In addition I do a 45 minute strength class most of those days (especially in the summer when I am not babysitting).  I consider myself in shape.  Coach is in shape.  Our kids are athletic. 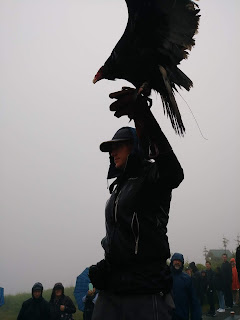 This hike was essentially 2 miles straight up a mountain.  It started to drizzle shortly after we started and the rocky path was wet.  I was worried I would fall.  With each step, we needed to examine where we could get a good foothold.  So not ideal!  I hated almost every minute of it.

When we got to the top, we were expecting to see beautiful views - the best in Vancouver.  Unfortunately, it was all fog and rain and there were no photos to be had or views to enjoy.  There is a picture of me sitting, or basically collapsing, at a table in the restaurant at the top.  I refuse to share.  My hair is completely slicked back to my head.  I look hideous and miserable.  I felt similarly.

The shows that we wanted to see were mostly cancelled because of the steady rain.  We stood in the rain and watched the birds of prey show, which was cool.  By the way, Tank left his brand new raincoat on his chair in the kitchen in Chicago after I told him a million times to put stuff in a bag before I left so I knew he would bring what he needed.  Grrr.  He monopolized the umbrella while we all stood there with our raincoats on and our hoods up.

6.  We also really enjoyed taking the cute people-ferry over to the little island off of Vancouver called Granville Island.  They have shops, restaurants, street performers, an awesome market place, farmers market, etc.  Loved it so much!  We visited multiple times - the ferry was walking distance to both our hotel and our hellacious airbnb.

Is that Curly's natural hair?!?!?!? That is so cool if it is.
Vancouver looks pretty cool but that weather, not so much.

It is her natural hair. She feels like a poodle. I spend more on her haircare products than on mine!

Vancouver was super cool. We hat a freaky rainy week. Like record breaking- I think. It kinda sucked. No idea why this posted with a huge gap- gonna try to fix it.

UGH!! That hike sounds horrible. Hiking straight up is never even if you are fit. And add some rain in to that and it's just the worst. I hate most of the shows were cancelled when you got to the top. Hopefully you got to enjoy a glass of wine or some other adult beverage as your reward!

Curly has the best hair!! I hope she loves it and isn't like the rest of us who loathe whatever kind of hair we were given.
The hike would most likely have killed me if you were struggling!!

Not gonna lie - this was a grumpy day for me. One of my delightful offspring snapped a photo of me with my thinning, wet hair when I reached the top of the mountain and collapsed in a chair in the cafe. No - I got no adult beverage and more importantly, NO GOOD PICTURES, unless you count the photos of the birds shown here. We probably had gelato that night -because we ate it most nights as a treat for eating food that I packed for meals. I'm telling you, we know how to live!

Curly hated her hair when she was younger and it was not even as crazy tight curly as it is now. She hated it because of the brushing thru it after baths- I swear I tried every high end hair product known to man. When she was 4, she fell off a jungle gym and broke her wrist. Her neck was stiff for a bit because of how she landed in wood chips. For multiple baths after, wood chips would float down stream during her bath. I was like, 'Huh? I thought we got all of those in last night's bath?!' It was HILARIOUS. I was like ,'what else ya got in there?!'

That hike should be labeled 'only for serious mountain climbers'. Either that, or I am just plain old and have turned into an incurable sissy.