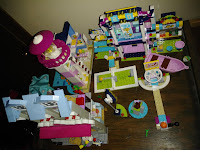 Let me say that another way . . . Curly is the only one living under our roof who does not roll eyes.  She asks if it is OK if she opens a new package of food like chips or ice cream.  After opening said package, she refrains from eating the entire thing, or hiding it so that no one else can get any.  She would NEVER put an empty bag of chips back in the pantry.  She still helps up opponents who she accidentally knocks to the floor while playing basketball (this might just be a girl thing).  She does not take everything personally.  She rubs my back when she senses I am upset.  She pays attention to whether or not I am upset, and verbalizes that she hopes whatever is bothering me is quickly resolved.  She still likes to play legos.  She thinks what Coach or I say is important.  She does not take 35 minute showers.  She asks if she can use a towel that does not have her name embroidered on it (after her siblings have unceremoniously used her towels).  When she is upset she might cry, but her head will not spin around while she screams about irrelevant matters that have little to no bearing on why she is crying.  She says good-night to me at least three times before she actually goes to bed.  She really, really likes to spend time with me . . . for now.

She turned 11 on December 19th, so I have a solid 2 years to continue to enjoy the above behaviors.

Last night as we were about to sing to Reggie, Coach commented on the fact that Reg showered in under 5 minutes.  So, his teenage tendencies still seem to be dormant.  I give him 6 weeks, 3 months tops before he begins to follow in the footsteps of the brave teens who have gone before him.

Maybe 'brave' isn't the right term here.  'Dumb' seems more appropriate.  Let's take Lad for example.  He is technically no longer a teen, but his actions haven't matured at the natural rate.  We wait.  While we wait, we think about our water bill.  We ponder how long his showers last.  Speaking of waiting, no one wants to wait to take a shower after him.

A few weeks ago, he hopped in the shower in the kids' bathroom.  I had just gotten out of the shower in my master bathroom on the other side of the wall, so I was aware of the shower starting.  By the time I was done blowing my hair dry and dressing, he was STILL in the shower?  Why?  His hair is shorter than mine.

I took action.  The kids' bathroom door handle is broken.  One of those home repairs that I am grateful has never been fixed.  If the door is locked, which it always is, then a firm jiggle from the outside will unlock the door.  Perhaps I should get a patent on this door handle and sell it to all parents of teens.

Anyway I stuck my head in the sauna  bathroom and averted my eyes.  'YOU HAVE 3 MINUTES'.  Lad was like, 'What?  I just got in here!'  Define 'just', nevermind.  I don't want to know.  Needless to say I stood in the hall and timed the 3 minutes on my phone.  When 3 minutes was up, I went in.  Now who's brave?

'WHAT ARE YOU DOING?'  Once you've seen a naked butt, you've seen all naked butts.  Besides, it was hard to see anything in there thru the steam.  Trust me, I was only focused on where the water handle was.  I threw open the shower door and shut off the water.  (which he promptly turned back on  - far cry from a victory, but I will not go down quietly).  I left the unlock-able door wide open on my way out.

Those who violate common sense water usage rules are not entitled to privacy in my book.  Tread lightly here, Reg.  This is not unfamiliar territory for your Dad and I.

Look at those adorable curls!!! And yes, with the long teenaged showers. It's ridiculous. My son would probably never be able to look me in the eyes again if I saw him naked in the shower! And that's so hilarious to me because he loved to run around the house naked after a shower up until he was probably about 7! :)

Lad was warned: 3 minutes of I come in! Trust me the room (and it is a really big bathroom) was filled with steam. I remained focused on the faucet handle. And, no - he it hasn't deterred him. He drives us nuts because he works out a ton. He wakes up (at noon) - showers - works out - and showers again! We keep telling him he is only allowed one shower at our house. Who showers BEFORE their workout? Especially if they have nothing going on AFTER said workout. He goes back to college on Monday. It is time.