This is our home.  It is not a commercial building that houses a daycare complete with a vestibule.  In the warmer weather, I would occasionally reach into the mudroom past Arrogant (the triplets' dad) or Narcey as they stood their getting kids' shoes on/off, etc.  I would say, 'Just going to close the door, so we don't get a ton of flies in here.'

Hello, McFly?!  Figure it out!  Between our quest to keep the air conditioning/heat  circulating inside and our attempt to keep the swarm of flies outside zipping around the garbage cans in the garage, a propped open door is counter productive.

The family I no longer sit for drove me nuts.  Coach rarely witnessed the real nitty-gritty nonsense.  He believed me, because he saw their ridiculous parenting style take shape frequently over the three years I cared for their kids.

But this was different . . . a true unwarranted parental explosion.

We sat there for a moment after Narcey's rant and dramatic exit.  Coach chose to use her behavior as a teaching moment.  'Did you see that?  She was being inconsiderate by leaving the door open.  Mommy basically pointed it out by closing the door.  Then Narcey's statements all started with "I".  "I have been very sick."  "I had a bunch of people staying in my house."  Apparently the world revolves around her.  This is a very selfish person.'

The kids continued to eat their cereal, but nodded in agreement.  I just kept saying:  'Wow!  Did that just happen?'  I assumed at the end of the day, she would walk in and mumble something like:  'sorry about this morning.  I haven't been feeling well.'  Arrogant is usually the one to pick up, so I wasn't even sure she would be there to explain herself.

Instead she texted me at noon.  It was long and wordy and insulting.  Now there were more fingers to point.  It wasn't just that she was sick.  (By the way, she is a teacher working with young kids.  If she was really as sick as she insisted, why was she not calling herself out?  Staying in bed?  Keeping her crazy-ass self away from us?)  Now she lashed out at me for my cluttered entryway and more . . . 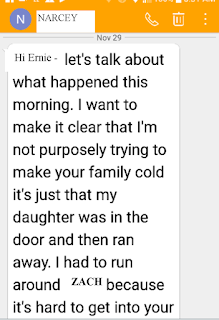 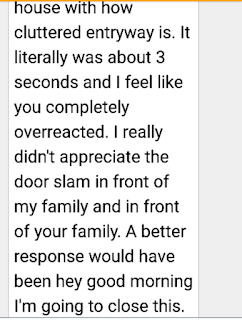 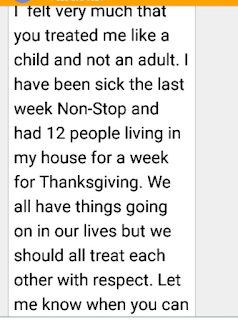 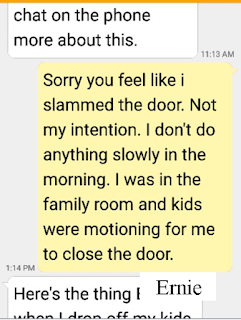 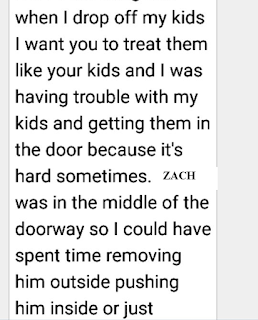 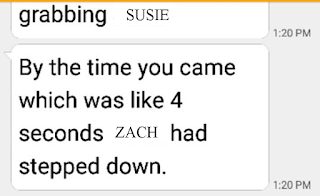 I was a tad rattled by this.  Treating her like a child?  Insisting that we needed to talk about this?  How about the blow by blow of which of her children were stepping where?  To me it was so much simpler than that.  I CLOSED THE FUCKING DOOR BECAUSE IT WAS FUCKING COLD.  I thought my response would simmer her down.  'Not an intentional door slam.'  Nope, she wasn't done (see above).

Coach read it and laughed.  'She definitely doesn't want you to treat her kids like they were your own.  If that was our kids, you would have grabbed them by the hood of their coat and launched them into the mudroom.'

I was confused by the 'treat my kids like they were your own' comment.  Was she requesting my help in getting her kids into my house?  Was it really worth trying to get into her head to figure it all out?  As always with these kinds of situations, there is more.  MUCH MORE . . .
Posted by Ernie at 7:30 AM

This is a really unbelievable situation. Has me thinking that I should put the Irish dancing book on hold and focus on a book to include all of the ridiculous babysitting stories I have endured. SINCE I WAS LIKE 12 YEARS OLD!!!!