More than a missed RSVP

A little background on why my in-laws made me flip my lid this week.  (This is a doozie that I will share with you after I have brought you up to speed on the essence of my in-laws.  Brace yourselves).  I find Example B (set to post after the 'example A' below) more offensive, but this will ease you into what they are like . . .

Example A.  (A as in ass holes).  Coach’s parents chose to drive to North Carolina in early June to help Coach’s brother, Matt, enclose a loft area in his new house to create an additional bedroom.  Matt lived minutes away from their parents here in Northern Illinois, but Matt and his wife (who was expecting her 8th baby in early July) relocated to North Carolina suddenly.  The company Matt worked for was moving some jobs there.  It wasn’t mandatory for Matt to relocate (especially weeks before a baby was due), but he and his wife jumped at the chance.

One of the reasons given for moving was that they heard there were lots of big families living in that area.  'The church parking lots are full of big vans like ours!'  OK.  Sure.  That makes sense.  Interesting because my sis-in-law constantly harps on the 'we-have-a-big-family' mentality.  Now she was suddenly claiming that it was hard to be so different from everyone else (in their Illinois town), because (you guessed it) 'we-have-a-big-family.' 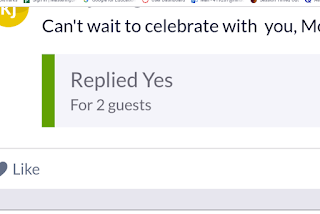 When Matt mentioned the possible construction project, the in-laws decided to spend a few weeks in North Carolina.  They left town a few days before Mini’s party rather than wait a few days to make the trip.  Strange, but true.  Trust me when I say that they don’t add much to a gathering.  That isn’t the point.

My in-laws do not bother to drive to where we live very often.  (About an hour away- I mean I can do the drive in less than that, but that goes without saying).  They once had plans to come and see Lad play high school water polo.  They didn’t show up, because there was a threat of rain.  Not even like a bad storm or a monsoon - just a threat of rain.  They were in their early 70’s -not their 90’s (and let’s remember that they are now in their mid 70’s but a drive to North Carolina doesn’t phase them.  Ya' follow?).  They had NEVER seen Lad play water polo.  There wasn’t a single drop of rain that night.  Lad was crushed.

Another fun fact:  my in-laws drive to where Coach's sister lives in Saint Louis for her kids' graduations, because those kids attend Catholic Schools.  Not only do they NOT attend my kids' public school graduation ceremonies, now they were blowing off the family party to celebrate Mini's graduation.

Yes, they are very, very Catholic.  Did you pick up on that?  When I suffered a miscarriage back when Ed was one, I called my mother-in-law, 'Sainty' to tell her about our loss.  I was sobbing.  Sainty said this exact thing to me:  'Can you believe that some people choose this?'

What?  Right to Life is her passion.  Who does that, though?  She was so wrapped up in her cause that she felt compelled to compare my loss to an abortion?  As usual, I bit my lip.  I am surprised that I have not done permanent damage to my lips after over 22 years of lip biting.  I was much younger back then.  Maybe even 'nicer' in general.  I do not feel compelled to be nice anymore.

A few years ago, Coach and I were in Florida (where my in-laws live half of the year) visiting his folks.  We related a story from when we were spending time at our friends' lake house.  My father in law asked us if our friends were Catholic.  When we said, 'No', he jumped in with:  'Well then, this is an opportunity.'  I think I would rather be invited back to the lake house than compromise our friendship by attempting to recruit them to join the
Catholic army.


Oh, and to update the overall concern about how Matt and family will get by in North Carolina without Coach's parent . . . his folks bought a condo a few minutes away from them in 'big-family' territory.  They plan to sell their place in Florida.

Just the tip of the ice burg.

It sounds to me like Matt and his wife were trying to get away from your in-laws! And now they are buying a condo near them??? YIKES!!!!! What part of NC are the in?

Apparently that wasn't their motivation for moving. They really did welcome the CONSTANT help. They are fine with the grandparents moving a few minutes away. Maybe deep down they knew they would follow them there. He works in North Carolina but just over the border and they live in South Carolina. Something with the word 'rock' in it. You know, that place where everyone drives extension vans for their large families.