It has been 22 years, or technically more if you count the few years Coach and I spent dating and engaged.  When Coach asked me to marry him, his parents were upset.  It was something I was not supposed to take personally.  Easier said than done.  His parents and my parents were (note:  the use of past tense) friends.  Our families had known each other for years.  Their reaction to our engagement was ludicrous.

According to my religious zealot in-laws, marrying without intending to procreate from day 1 was a sin.  Coach was a full time student.  His parents assumed that we would not be welcoming children immediately.  Let’s pretend for a MINUTE that this was ANY of their business.

Even after all these years, it is hard to find the words to describe the hurt and the frustration they caused.

Of all the hurdles a bride might need to jump when finding footing with future in-laws, who would have anticipated this one?  (FYI:  Lad was born when Coach was still a student.  His folks knew nothing of my financial situation.  I put Coach thru PT school and had a baby while he was in school.  Plus I owned a one bedroom condo that we lived in.  We took out zero loans.)

My parents are Catholic.  My mom spent time in the convent before deciding to marry my dad.  I was raised with a strong faith.  We were not slackers when it came to religion.  But Coach’s parents and their over-the-top interpretation of Catholicism is downright barbaric.

When we were dating, Coach felt compelled to tell his parents that we saw the animated movie ‘The Lion King’ repeatedly.  This was to avoid their disapproval.  Spending time in a bar or being alone was classified as an ‘Occasion of sin.’

They have a singular focus.  Well, maybe two focuses, but they relate back to one another.  They can talk ultra-conservative politics (because they find so many candidates immoral or Satan like) or they can offer guidance on Catholicism - whether it is welcome or not.

Over the years we have received countless emails instructing us on how to vote or how to pray.  Imagine their disgust when we yanked our children from Catholic Schools?

Their latest email sums it all up.  I am just flat out done.  I am too old to be instructed on a faith that I take seriously and that I work on daily.  Coach and I teach religious education.  We attend mass.  We pray. 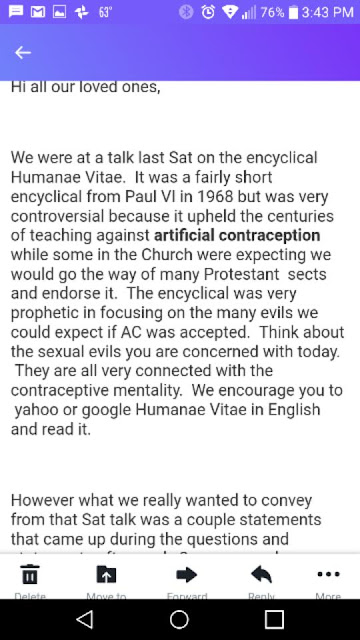 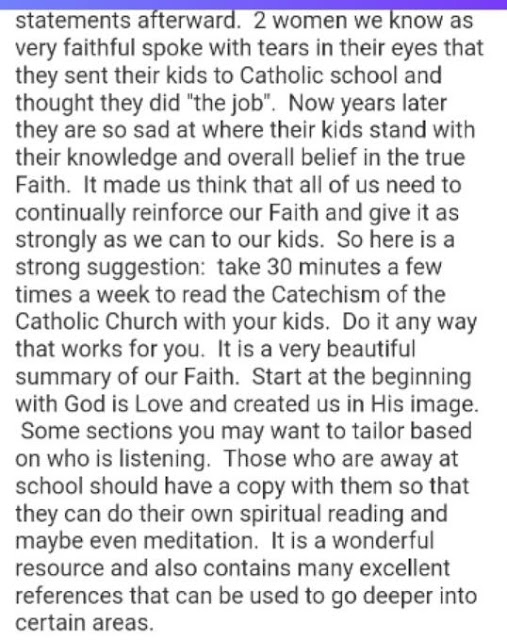 The problem I have with this latest installment of ‘We must save all Catholics who aren’t REALLY following the by-laws’ that arrived in my email in-box last week:  it has pushed me to my breaking point for several reasons.

2.  I have kept my mouth shut for years.  Coach is comfortable ignoring them.  I can’t do it any more.  Part of the problem might be that I CANNOT TOLERATE self-righteous people.  Remember my brother was raised to believe that he is always right.
Or perhaps my middle child status is to blame for my need to be heard, since I have always had to fight for what I want and speak up when I was wronged.  I WILL NOT have these people BELIEVE that their emails have impacted me in the way that they want them to impact me.  I need to just call a spade a spade and tell them that I have chosen to unsubscribe.  My goal is to inform them that I have a spiritual adviser . . . and it ain’t them.

3.  The audacity of these ‘Christian’ people to try to offer ME unwarranted instruction!  My in-laws are in a word ‘judgmental.’  While they get all worked up trying to convince the world to study the Catholic faith seriously, they struggle to relate to people on a personal level.  My father-in-law is a jerk.  He has an explosive temper and is incredibly inpatient.  He is overbearing.  He doesn’t listen when other people talk unless they are conversing about golf or God.  Translation:  any time I have ever tried to talk to him, he interrupts me, or changes the subject.  My mother in law is passive aggressive.  She is a worry wart who doesn’t live in the same world as the rest of us.  Twice this summer they ticked me off because of their social transgressions.

So, I see my therapist on Friday to discuss why I cannot ignore all of this.  Until then, any suggestions from the peanut gallery?
Posted by Ernie at 7:30 AM

Families are hard. I have no advice. But if you are determined to confront them be ready for the fall out because it will most likely affect your entire family not just you. If you don't want to see these emails, use your email to create a rule that all emails from them are sent to a particular folder and/or trash as soon as they are received. That way you won't see them and whatever it contains won't upset you because you'll never read them.

On another note, what a beautiful bride!

I don't think I will confront them. I feel like part of my problem is that I grew up believing parents were right. They were supposed to be. We were kids and were supposed to follow their lead. I have recently realized that my folks aren't always right and as much as I know Coach's aren't either, it is like a habit to still expect them to be right. What the heck is wrong with me? I mean I am an adult, but we both have very controlling, self-righteous parents. I have to train myself to remember that they aren't always right and it is OK NOT to be on board with everything that they say. I think I get particularly bent out of shape when they are dictating faith stuff because I feel like they are correcting me or that they are trying to say I am not doing enough. Screw that thought process!

And thanks for the compliment - so funny to look back and see how YOUNG we were! We were kids, then - not now! :)

So funny you mention therapy - I had to START therapy specifically because I couldn’t ignore my Catholic in-laws. Are your Charismatic Catholics? Mine are.

I had to google what Charismatic Catholics are. Ha! No my in-laws are not Charismatic. I would say they are the opposite. Crazy devout. By the letter of the law. Ultra traditional. Insanely conservative. They fear that everything is a sin including getting married when you are not willing to welcome children on day one of your marriage. They are opposed to science advancements - like they were not pleased when my uncle had a heart transplant. My mom spent time in the convent, but ultimately decided to get married. My folks both attend daily mass, but my mom was appalled at some of the nonsense my in-laws have spewed at us over the years. Our parents used to be friends. To me, they shouldn't consider themselves so devout if they are so busy judging everyone else!

I think the best way to deal with his parents is the way he has been dealing with them his whole life - ignoring them. I think they honestly believe they are being helpful. Obviously they are not. You know their behaviors are petty and controlling and holier than thou but they clearly don't see themselves that way. So, the best thing you can do is to continue going to therapy to work through how YOU feel about everything and continue to let your feelings out here on the blog where they can't see them. I don't think it would do any good for your to explain how you feel to them. They would probably take the "but we are just being helpful and why are you being so hateful to us" approach. It's a no win situation for you. Just keep living your faith and ask God to help heal your relationship with them.

Sounds good. My sister in law tells me that they think they are helping. My therapist did some role play with me to help me figure out how to shut them down conversationally but not argumentatively. Like 'Oh, I don't know if it makes sense to even talk about that. I think we have some pretty different beliefs there.' I haven't talked to them in months. That helps too. My mother in law the perpetual worry wart thinks I am just WAY TOO BUSY to talk on the phone because I am babysitting for so many kiddos. Not the case. At all. I mean, I AM busy, but preschoolers play in the basement, babies nap, I still manage to do meal prep, laundry, send emails, AND sometimes chat on the phone. What she doesn't know (that I am an expert multi-tasker) won't hurt me!