vanishing act for 4 pounds of chicken 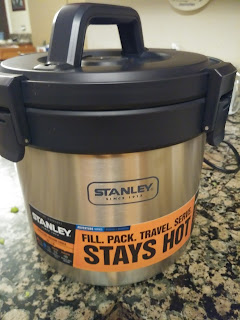 On Friday night, I made a huge dinner.  Part of my master plan included bringing meals to the Irish dancing competition on Sunday.  Last year I got stuck with hungry kids and no time to run out and get them fast food before the awards ceremony started, because Curly's competition dragged on and wrapped up just before awards.  This time I knew my new handy-dandy Stanley thermoses would save the day.

Saturday night before I went to bed insanely early in preparation for my 4:40 am scheduled wake up, I reached into the fridge to pull out the multitude of leftover honey mustard chicken.  I was going to cut up enough for the girls and I, so that it would be easy to heat up and plop into the thermos.

Imagine my surprise when I could only locate a small Tupperware container with one and a half chicken breasts in it.  Coach shrugged when I demanded to know where the rest of the chicken was. The girls and I ate an early dinner on Friday, so I wasn't home when the boys ate and stored the leftovers.

Then it became clear to me, that the boys didn't so much 'eat' Friday night . . . they scarfed.  They inhaled.  They partook in a feeding frenzy that I'm not sorry I missed.

Folks, I had prepared 4 pounds of chicken.  Laddie's big-ass appetite is away at college.  How could they have polished off that much food in one sitting?

I insisted on remaining chill for this competition, so I remained calm - slightly grumpy and fearful of the future of my grocery bills, but calm.  The girls and I would make due on less chicken.  Coach, who was supposed to feed the boys the remaining (and now non-existent) honey mustard chicken Sunday night while I was away at the dancing shin-dig could fend for himself.
Posted by Ernie at 9:00 AM

Wow!!! That's a lot of chicken! It must be really good too.

It is tasty - and gluten free! I hadn't made it in years and years and dug out the recipe a few months ago. I couldn't believe they could eat SO much! Usually Tank only eats that much if it is something unhealthy like pizza or cake.