Well, tomorrow is the day.  Coach and I drive the Great White (our 12-seater Chevy Express, white, former-airport-shuttle van) to Boston.  We plan to depart at 5 am.  It happens to be our 21st wedding anniversary.  How romantic.

Coach usually does most of the driving.  I do most, or ALL, of the packing . . . so that means I end up in a somewhat self-induced coma for the first several hours of most lengthy trips. It's a hard earned, well deserved nap.  No matter what nonsense goes on in the car, Mommy snoozes thru it.  Blood curdling screaming that threatens to wake the dead will bring me 'round, but God help the child that is responsible.  All members of the family know that sleep is the only thing that helps me cling to my remaining sanity, especially on a long road trip.

After 15 hours of driving, we intend to arrive in Boston.  A day of touring Lexington begins our adventure.  The next two days will be devoted to downtown Boston.  The freedom trail is calling our name.  We aren't baseball people, so I'm not sure we will hit Fenway Park.  On Monday, we will check out Boston College in case Eddie decides to apply there.

Monday afternoon we log three more hours in the van as we drive to Laddie's college an hour north of New York City.

Because we are dropping Lad at college, the van's storage space will mostly be devoted to bins of college gear.  Last time we spoke, Coach was toying with the idea of removing half of the bench of four seats -the last row, and the only row that reaches across the entire width of the van.

It occurs to me that if the last row is reduced to a mere two seats, then two of our children will be forced to sit next to one another without an empty, 'buffer' seat between them.  There will be accidental touching, inevitable bumping, and potential leaning against one another.  This will undoubtedly lead to moaning and groaning.  For 15 hours, no less.  Sounds horrifying, right?

What better way to celebrate 21 years of marital bliss?  Oh, and we will be feasting on whatever meals I have slaved away to prepare in advance.  Of course, the fact that this adventure ends with our oldest being unceremoniously deposited at the school he is transferring to makes it all worthwhile.  It's been a long summer chock full of opportunities for him to ignore our basic rules and regularly behave inconsiderately.   IT IS TIME, so I accept the unpleasantness that accompanies 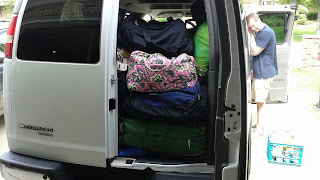 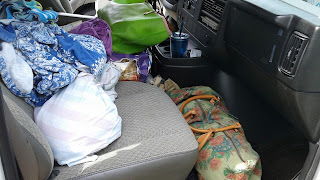 our Boston or bust trip.  (these pictures were taken when we drove to Glacier last summer - note there was hardly anywhere for me to sit in the front seat - can't wait to do this with college gear too!)
Posted by Ernie at 6:51 PM

Have a safe trip and happy anniversary!

Thanks so much! We survived the drive out here and Coach surprised me with TWO rooms at the hotel since it was our anniversary. He also brought a framed photo of us from our early dating days. He left it out on the nightstand. It looked like part of the decor - I didn't even notice it!