splashing the baby: case of bad kids or shared pool? 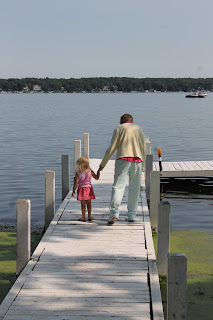 The last of our three consecutive short trips in July was with Coach's family to a resort on a lake in Wisconsin called Lake Lawn Resort.  His parents will celebrate their 50th anniversary in October, so we (his folks, his 4 sibs, their spouses, and 23 grand-kids) opted to gather in the summer and celebrate a little early.  This premature celebration led to a running joke about the fact that we were counting on them to remain happily married until October. 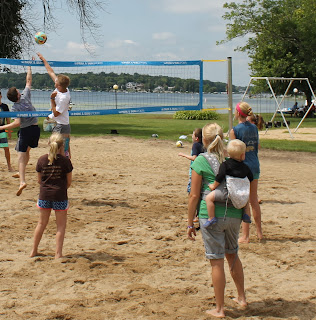 I spent most of the early afternoon on Tuesday with the non-golfing segment of our group:  most of  the moms, and all of the kids under 13.  We sampled the three different pools located at different parts of the grounds.  After the golfers returned, there was a lively game of volleyball.  I do not enjoy the game of volleyball, but as you know it is my life's passion to capture family moments on tape.  I recorded most of the game with my camcorder.

Coach and I returned to the gang's favorite pool with our 4 youngest, a couple of nephews, and a niece for a quick dip before our presence was required back at the house for a group grand-kid photo (guess who was commissioned to snap the picture?).

Reggie wanted to mini-golf.  I urged Coach to take Reg and the other boys mini-golfing about 30  minutes before we were expected to be back at the house.  It was a tiny course located right next to the pool, and they could easily be done in the blink on an eye.

When Tank got out of the pool, he groaned about a woman I have nicknamed 'Mona'.  Apparently Mona continuously scolded the kids for splashing her baby.  All the kids who were with us were good swimmers.  I admit that my focus was more on my book than their pool activities, although I did whip out my camera to take some cute candid pictures of the giggly cousins. Coach was in the water playing with the kids most of the time, so it wasn't like they were without supervision.  I was less than 2 feet from the pool on my chair.

As a side note, these are all VERY well behaved kids.  My one niece and nephew are incredibly quiet.  They tend to converse more when they are surrounded by their cousins and the grown ups are out of earshot.  I would be SHOCKED if they ever behave badly - let alone in public.

A few minutes after the boys left to mini-golf, I heard it.  Mona hollered at my two girls and my quiet niece.  The girls had just jumped into the pool after exiting the nearby hot tub.  They were in their own world.  Being playful.  Being KIDS!  They weren't being rude or disrespectful or intentional splashers.

It was approaching dinner time, so the crowd in the pool had thinned out considerably.  Mona was standing in the pool pushing her tiny two month old baby around on a float.  This infant was laying on her back on this flotation-like raft.  She was too small to sit up in the common baby floats that resemble a boat.  It was hot.  Very hot.  Still, this was NOT her backyard pool.  There were other hotel guests cooling off in the pool.  I was shocked when I heard her reprimand the girls.

'Girls!  Girls!  This is like the 5th time!  You're splashing the baby!'  I was appalled!  I cupped my hands around my mouth and yelled out to her, 'It's a pool!  It's a pool!'  She looked over at me somewhat stunned that I was challenging her authority over the hotel's splashing policy.

She didn't have much to say.  'If you don't want your baby to be splashed, then take her out of the pool,' I continued.  Wasn't that obvious?  Seriously?  Looking back, I think I could've offered her even more suggestions.  Like:  no one is jumping into the pool near the stairs in the shallow end, why not steer your just-fresh-from-the-womb baby over to the stairs to shield her from the deeper area where kids are playing?


I'll be honest.  I have no trouble reprimanding other people's kids.  AND I have no issue with other people correcting MY KIDS . . . provided that my children are misbehaving or not following the rules.  It has happened, and on those occasions I've been embarrassed to realize that my kids were at fault.  My apology to the offended adult is followed quickly by the scowl I flash at my kids.

Just before the baby splashing incident, I watched as a couple of unsupervised boys hang on the rim of the two basketball hoops cemented in the ground near the pool.  Just to be clear, I did tell a few of the boys in our group earlier in the day to lay off the rims.  Coach called out to the boys first.  The hoops were right in front of our chairs, so the hanging on the nets and the rims was happening right under our noses.  Coach gently asked the boys not to be so rough, because he was afraid the hoops would break.  They ignored him.

When their careless play continued, I joined the conversation.  I made sure I had their full attention before I spoke:  'Don't hang on the rims or the nets boys.  If the hoops break, then no one can use them.'  They stared at me like I was the freak that my children claim that I am.  I could tell my message wasn't being taken seriously.  So I let them know I was serious.  I made them all  nod at me that they understood my directions.  They finally stopped staring at me blankly.  'OK,' they responded.  There was no more hoop hanging after that.  Hey maintenance department at Lake Lawn, you're welcome!

After I reminded Mona that she wasn't the only person utilizing the pool, Mini gave me a look that I translated to mean:  'OK, thanks Mom.  Now be quiet.  This is embarrassing.'  The odd thing was, this woman had older kids.  You'd expect that kind of 'splash-reaction' from a first-time mom, not a seasoned one.  Although on the other hand, a first time mom wouldn't have wiped the after-birth off of her newborn and then stuck her on a raft in a resort pool.  Right?

I went back to reading my book, relaxing at the pool, thinking crazy mom had realized the err of her way.  I tend to lose track of time when I am reclined at the pool.  Or more accurately, I push the time continuum to the very limit.  I decided I could get dressed for dinner in record time.  A few more minutes at the pool would work just fine.  Besides, the picture scheduled of the 23 cousins in color coordinated t-shirts was happening before dinner.  I was banking on it taking several minutes for the kids to assemble in age order.

Finally, I jumped up and decided I better jog back to our room.

I reached the gate, and called over my shoulder to the girls that they needed to dry off and bring the beach bag back to the house.  Just as I walked thru the gate, Ms. Mona walked by inside the gate.  At first I didn't realize that she was talking to me.  Then it clicked.

''Way to go!  Way to raise conscientious kids!' she spewed.  Little Ms. Mona the Brave didn't bother to look in my direction as she insulted my parenting skills.  Oh, that was just too much.  I don't handle rude people well.  I also struggle with people who are WRONG.  I guess I attribute that to being a middle child.  I always had to fight my own battles.

I spun on my heel despite the fact that I was running late.  I re-entered the pool area thru the gate.  Her back was to me.  I took a few steps towards her and then I shouted after her:  'How dare you!  You don't know these kids at all.  They are nothing but courteous, but they are just playing in the pool being kids.  If you don't want your baby splashed, then don't put her in the pool!  You have no business yelling at these kids!'  I turned and marched back to the house.

Even after I walked the length of the property to the room, I was still steamed.

The next afternoon, all family members opted to visit the pool after checking out of the rooms.  There was no sign of Mona and infant.  There were a few older women sitting on the patio outside their hotel room that was a stone's throw from the pool deck.  One of them waived me over.  'What did that woman say to you yesterday?' she asked.  I described the situation, and she and her friend were disgusted.  They agreed that the woman had no business scolding my girls for enjoying their pool time.

Earlier that morning as we were loading our cars, I suggested to our extended family that we chose our pool based on where Mona and her baby were chilling.  I was hoping for a 23 cousin synchronized cannonball in whatever pool they were hanging in.  Just kidding!!!