would the redo be awarded?

My little trooper marched - literally marched just as her private lesson teacher had showed her - commanded the judges' attention, threw her shoulders back, aimed her chin up, plastered a big smile across her face, and pointed her toe.  I think I held my breath.

She danced steps that were unpracticed.  They weren't reviewed in the many private lessons Curly took leading up to Nationals.  My suspicions that these steps were more remedial than her original White Blanket set were confirmed when Reggie mumbled, 'Oh, this is what I danced at the Oireachtas (midwest championships in November).'  Reggie couldn't be bothered to learn a set in addition to his hard shoe dance, so he did the same hard shoe steps to the set music when he got a recall.  Swell.

Reggie actually qualified to compete at Nationals just like Curly, but unlike his little sister, his heart wasn't in it.  His heart was in basketball - big time.  He opted to retire his dance shoes at the young age of 11.  Nuts, because what a waste of his awesome birthday - January 9th!

When Curly bowed, I exhaled.  NOW she was done.  She had been the only dancer required to redo her set.  She pulled it off - AMAZING!  This re-do round may have been more basic, but it looked incredible.  There was no hesitation, no deer-in-the-headlights look, and no timing to the music issues.  I stood up from my chair and cheered like the water polo mom that I am.  Um, yeah . . . I go nuts at water polo games.  Very verbal, over-the-top, loud.  That kind of cheering isn't common at Irish dancing events.  Still, it felt totally appropriate.

Curly got off stage and the smiley-face persona disappeared.  She wilted.  Her posture slumped.  Her face just spoke volumes:  damn, why did that happen?  I loved my White Blanket set. (click on those words to go to an earlier post with a video clip of Curly dancing the set . . .  in case you missed it).

Cara hugged her.  She apologized profusely for the oversight on the new rule.  She also built Curly back up by pointing out a few things.  1.  The judges cannot un-see what they had already seen.  2.  The judges were given the option of having Curly dance again, or simply disqualifying her.  They knew she was a good dancer, and they asked to see her dance again.  They wanted her dance to count.  3.  It showed real maturity on Curly's part to be able to get up and dance something that she hadn't prepared.  She probably impressed the judges with her recall, and her poise.

NOW we waited for results.  Despite all of Cara's encouraging words, I worried that this set mix-up would count against her.  The awards are announced in reverse order.  They started with 38th place and worked their way up.

My brain hurt.  I just didn't want Curly's name to be called first.  It wasn't.  As each dancer was called to come up and collect her award, my heart beat a bit faster.  Curly wasn't announced in the 30's or the 20's.  Mini and I exchanged a glance when they asked for applause for the top 20.  Curly came in 19th place.  She was thrilled!  She hadn't shared with me that her goal was to be in the top 20, but that had been her goal all along.  And there she was.  Beaming on stage!  My brave Curly, who spent three weeks in a boot, and who held up under incredible pressure, accepted her award on stage like a champ!

We celebrated with hugs and pictures.  Finally, I looked forward to getting caught up on my sleep.  (Below are the two awards Curly received:  a Waterford Crystal Fleur De Lys ornament and a medal.  Only the top 20 got the ornament) 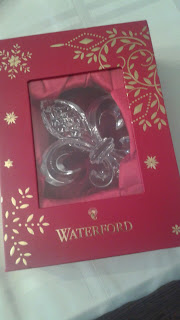 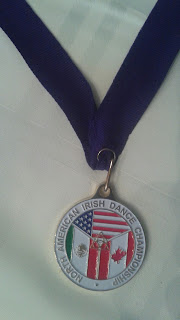 I'm so happy she met her goal - that's amazing!