Mostly true poem penned by Eddie about me

Years ago Eddie wrote a poem about me.  We think he was in 4th grade - 11 or 12 years old.  I honestly don't remember if it was part of a Mother's Day thing at school, or if it was just a random assignment.  It's been hanging in the inside of my baking cabinet ever since.  It has become one of those things that becomes kind of invisible because it's been there so long.

Tank just burst out laughing the other day reading it, and suggested I highlight it on my blog.  (I'm assuming Tank was scrounging around looking for where I stashed the Oreos, because why else would he be in my baking cabinet?)

Here is a photo of Eddie's poem.  The discolored streak along the side is from the time a few years ago when I dropped a bottle of vanilla and it splashed . . . everywhere. 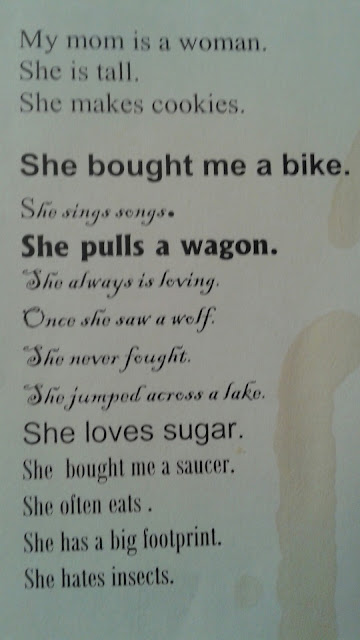 My favorite lines?  Easy:  'She often eats'
'She has a big footprint'  Both true statements.  I love his observations.

Um, I know a few people who might dispute this statement.  My siblings.  Hey, I was a middle child.  No one had my back.  I had to stick up for myself.

Then there is the time I tried to break up a fight at my little brother's basketball game . . . when we were in college.  It was an outdoor tournament and my hood was up because it was cold.  One of the butt-heads from the other team who was talking trash and pushing my brother around thought I was a guy.  He almost took a swing at me when I jumped in the middle of these big nutty guys.  Yes, I have an Irish temper.  Yes, I'm flat chested.  No, my brother was not the LEAST bit impressed.

Also, I don't recall ever jumping across a lake.  Eddie no longer has any idea what he was referring to, so I now wish I had made a few footnotes when he first gave me the poem.

We did see a wolf in Yellowstone -from a distance.  Maybe his jump across a lake reference is also from something I managed to do in Yellowstone - a creek maybe, not a lake.  Ah, the perspective of a young boy.

I hate insects.  I am tall.  I make cookies.  All true.  I try to 'always be loving', but since it's been about 6 years since Ed wrote that - he might want to update that line if given the chance.  Not sure if his teenage self appreciates 'tough love', so he might not distinguish my discipline tactics as deep down examples of love.

I often pulled a wagon.  It was usually full of kids, and I sometimes pushed a stroller with the other hand while pulling the wagon.  Once I pulled the wagon down the sidewalk and my sister and her kids drove by.  They waved to us.  As I waved back, I saw them burst out laughing.  The wagon was suddenly lighter.  I turned my focus away from the chuckling people and back to my wagon.  One of the tots had rolled out of the wagon while I was waving frantically to my sister's minivan.  Oops.

I cringe to think what Curly would write if she was assigned this kind of poem in the next few years.  Thanks to birth order, it would probably include lines like, 'Mommy can't eat gluten.
She swears a lot.'

Hopefully she would still consider me 'always loving.'