(continued from Prince's memorable performance) . . . I don't recall that the fuzzy, black and white show was all that interesting probably because I either hadn't seen any of the movies being praised or heard of any of the bands being awarded.

Prince was seated at the piano playing and singing between award presentations.  Just as he began to holler freakishly authentic bird-type noises while simultaneously ripping open his white shirt featuring a fluffy white pirate-like tie, Mom entered the room. 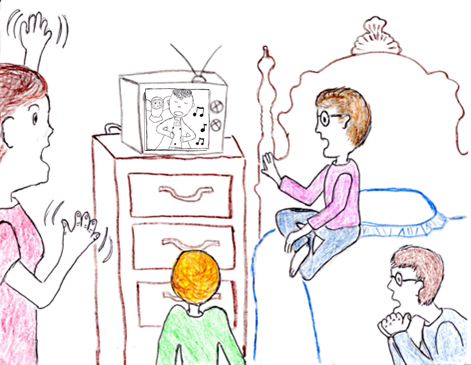 The show had of course been harmless up until that exact moment.  Mom's timing was impeccable.  My brothers and I had no explanation.  We were at a loss for words.  Not that Mom waited around for us to defend our position of innocence.

I swear time stood still but Prince's goofy antics became more and more unpalatable.  There was an owl on the set.  It may have even been perched on Prince's arm or shoulder.  It was such a jarring experience that I'm surprised that I don't remember it more clearly.

Prince appeared to be making love to his grand piano.  Frozen and frightened, my brothers and I just watched as Mom lost it.

'What!' she exclaimed.  The word wasn't being used in conjunction with a question.  I suppose the question was implied.  The instant she snapped out of the 5 second trance she had been in while her face tightened and reconfigured, she marched forward while waving her arms above her head.

'Turn this CRAP off!' she insisted.  Again, none of us moved -probably because she had struck the power button with enough force to turn the television off herself and push the whole damn set back a few inches on Mike's dresser.   An inch of dust typically hidden under the antique TV revealed itself.

Although Pat was younger than me, he was the epicenter of my parents' universe.  That alone ticked me off to no end.  Moments like these, however, when our mother glared at him because she expected better of him- I felt overcome with a sense of relief and joy.

As the older sister without a television in my bedroom, I was tempted to point out to her that perhaps my younger brothers shouldn't have a TV in their bedroom in the first place.

It had been ages since Mom had decided the boob-tube belonged in the boys' room.  My sisters were a few years older than me.  They didn't seem impacted by this kind of inequity.  I was less than a year older than Pat, so this kind of thing hit me right between the eyes.  I struggled with these gender-biased issues despite how commonplace they were in our Irish Catholic family.  Besides - I knew from past experience, the more I objected the more I would be forced to cope with unending gloating from my favored brothers.

Instead of pointing out the obvious, I decided to let the trauma Mom had endured work its magic as I quietly slunk back to my quiet and TV-less bedroom.
Posted by Ernie at 9:00 AM

Email ThisBlogThis!Share to TwitterShare to FacebookShare to Pinterest
Labels: 1983, Prince

OMG I am laughing so hard.
Did you draw that graphic??? I LOVE THIS SO MUCH.

I remember clearly my mom and I talking in the car the summer before my senior year when the song I Want Your Sex by George Michael came on the radio.
My mom's face was hysterical, I was beet red, and honestly, this memory traumatized me for many years.