learning to deal with an outspoken father-in-law

(Click the link below to read the beginning of this story
'Get your shit together!'
from Nov 11, 2016  . . . and yes, I still decided to marry Coach despite his father's temper tantrums).

Unclear on protocol for the uncomfortable situation created by my future father-in-law, I froze.  I was two steps behind Coach.  Bypassing a farewell in front of his steamed father, I spun on my heel and rushed out of the airport to find my car.  Since Coach's family lived down the street from mine, the entire drive home I worried that Senior's car would pull up alongside of me.  I envisioned him shaking his fist at me from the next lane, ready to blame me for Coach's 'hidden' presence at the gate.

I nervously glanced at each passing car as I raced to my house.  Although our private time was spent harmlessly kissing, I worried that Senior had witnessed our somewhat public make-out.  Never prone to exhibiting public displays of affection in general, Coach and I steered clear of such activity even more so around our families -not wanting to embarrass them as they had been friends for years.

Now I began to grasp some of the stories I had heard over the years about Senior . . .

As high schoolers, Coach and both my younger brothers caddied at a nearby classy golf course.  To celebrate the end of the caddy season, the club annually hosted a small banquet.  Not only did they recognize hard working caddies verbally, but they also offered various prizes distributed according to the number of loops carried by each kid.

One year my younger brother, Pat, was invited to the prize table before Coach.  Although he wasn't an avid golfer, he chose a golf bag and returned to the table.  Senior, my future father-in-law, leaned towards him after he sat down and informed him that Coach, a more serious golfer, had planned to select the golf bag when his name was called.  AWKWARD!

I never attended a caddy banquet, but when Pat described the event I grasped the awkward tone Senior's comment set for the rest of the evening.  The next morning, Pat walked down to Coach's house and rang the bell.  He told Senior that after some careful thought he was more interested in swapping the prize Coach had selected for his golf bag.  Senior stumbled over his words a bit before locating Coach's prize and completing the trade.

After 20 years of marriage, I've encountered countless unbelievable episodes with a stubborn, controlling father-in-law, who likes to bark his opinion and share his extreme right-wing politics.  A few of his finer moments include shouting in my face over our plans to marry while Coach was still in graduate school, stating his dislike of our newborn's name, and scolding Coach for not revealing what outpatient procedure I once required. 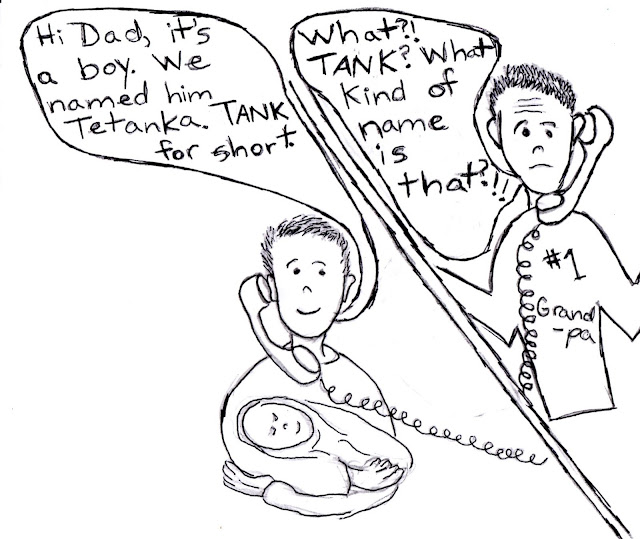 I have learned not to fear his wrath as I did that day at the airport.  While I feel more prepared to cope with his outbursts with each passing year, even early on in our marriage I managed to brace for one of his stunts.

When I met with our wedding photographer before our 1996 wedding, I described my father-in-law.  'Take a few group photos with him.  If he storms off in the middle of a photo shoot, you have my permission to tell him we aren't really that interested in his mug being in the pictures anyway.'
Posted by Ernie at 1:24 PM