Coach and I recently visited Mesa, Arizona while he was taking a course.  We were there last year for a long weekend when he attended another seminar.  Last year we followed a recommendation and ate at a restaurant on Gilbert.  We ended up eating most of our meals at this hot spot on a lively, little stretch in town that was home to many great eateries and bars.  This year with our limited time, we returned to the area each night.  We were never disappointed.

We chose to revisit a Mexican restaurant called Joy Ride.  Last year, Coach ordered something that he raved about.  Although it wasn't marked as gluten free, once he had devoured every morsel (and had nothing left to share) we discovered from our waitress that it lacked gluten.  Although I had eaten something delicious, I wished I had realized that Coach's food didn't pose a threat to my health.

This time we both looked forward to feasting on the savory entree that I had missed out on.  After checking in to request a table, we ventured out to the patio where a waitress could take our drink order.  Our anticipated wait time was 15 minutes.  Grabbing a menu, we began to look it over in search of Coach's yummy entree from our previous visit.

I had managed to muffle my cough for most of the day.  Once while I relaxed at the pool, I had a momentary outburst.  I'm confident the older women surrounding my lounge chair wondered why I hadn't been quarantined.

Now with no warning I began to gasp for air between my deep, painful coughs.  Fortunately there was a breakfast restaurant next-door that was closed until morning.  In order to move away from the patrons at the Joy Ride, I staggered over to the empty outdoor seating area and leaned up against the wall.  Bent at the waist, I reached into my purse for my wad of kleenex to deal with my 'productive' cough.

I assumed Coach would follow me over to where my cough had banished me.  After a few minutes, I felt someone's presence next to me.  I turned slightly and saw a young man standing next to me.  I assumed he had approached me to ask me if I was OK. 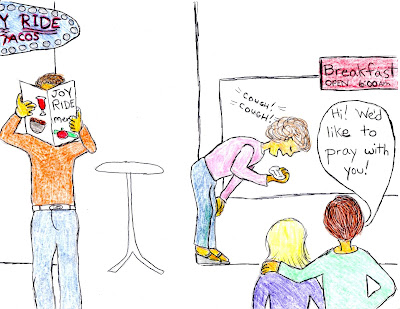 Instead, he introduced himself to me.  'Hi, I'm Brad and this is Charity,' he motioned to a young woman next to him.  I waved a hand at him in an attempt to dismiss him.  I assumed he would understand my intended unspoken message:  'I'm fine, thanks.'  After all, spitting phlegm in a kleenex while struggling to move air outside a trendy restaurant wasn't exactly the most opportune time to make acquaintances.

The couple stayed put.  'This might not be the best timing since you are coughing so much,' he continued undeterred.  'But we are from the church down the street.  We are concerned with the state of our nation and we are walking around tonight offering to pray with various individuals.'

Where the hell was Coach?

I continued to focus on the task at hand:  breathing.  I attempted to wave them off again with a flick of my wrist.  No luck.  They remained.  Could there be a hidden camera embedded in one of the nearby portable heaters?

'I'm sorry I didn't understand that,' he acted as if he had missed my response.  There was no responding, since words took a backseat to coughing.  A few more minutes ticked by as I was ogled by these two do-gooders on a mission to pray with people in a popular dining area on a Saturday night.  Who does that?  I was trapped in a public area making a spectacle of myself wishing for a bit of privacy.

'Um, do you want some water?' Brad asked at last.  I shook my head and tried once again to wave them away.  A minute later- they FINALLY wandered off.  Coach walked up with the menu still in hand.  'Where were you?' I hissed between coughs.  'I was over there reading the menu.  What did those people want?' he wondered.

I whipped off my jean jacket to deal with my accumulating perspiration and assumed my position doubled over using the wall for support.  I fumbled around in my purse for my last few kleenexes.

Just then we were alerted that our table was ready.  My coughing fit had lingered for 15 minutes.  I took a few short breaths hoping to control my coughing fit so that I could sit down at the table.

Coach and I managed to enjoy our individual orders of the infamous chicken burrito bowl and a few good chuckles about the odd approach of Brad and Charity.  This evening would definitely fall under the category of 'I just can't make this stuff up.'
Posted by Ernie at 9:00 AM