I got an email from Tank's (short for Tetanka) basketball coach/gym teacher today.  Mr. Un (as in I'm unimpressed with this man on an ongoing basis) sent this alert out to all of the parents of the 8th grade boys' basketball team.  He wanted to make us aware that the 8th grade boys were goofing around during lunch.

When their lunch period ends, this group of teenage boys roll into their gym class still in goof-ball mode reliving the precious glory 'minutes' of how funny they were during lunch.  In other words, they are still bragging about the shit they pulled in lunch and seem to be feeling that they are above the law.  There was a reference to a boy spitting water at another boy, who ducked.  Another kid got nailed with spewed water.

First of all, let me just say as a mother to a handful of teenage boys, nothing would surprise me.  Furthermore, I survived a three year stint as a substitute teacher.  Most of my assignments landed me in a somewhat undesirable junior high because most subs refused to go there.  I've seen it all.

I arrived at Tank's away basketball game after school and sat near a few of the other moms.  I don't gravitate towards any mom here in particular.  Instead, I try to be friendly while leaving a few rows between us.  There's a reason for the obligatory few rows . . .

There is one couple who verbally dispute EVERY call.  We've all seen our fair share of bad calls but seriously.  'He traveled!'  'That was a foul'. 'Are they going to let him do that?' 'He was out of bounds.'  It's irritating.  To top it off, their kid thinks his shit don't stink.  Since Thanksgiving break, the mom, Carolyn, has been harping on the school's extreme discipline policies.  I don't suppose it has occurred to her that her kid IS acting like a disruptive pain in the watoosie at school.  Her older son plays on the high school team with Eddie.  Let's just say it's been a long basketball season.

I casually asked the other moms if they had seen Mr. Un's email. They had.  Carolyn informed me that Tank eats lunch during a different period, so he wasn't lumped in with the naughty kids.

I know Tank usually eats with one of his closest friends, so I suspected that he wasn't involved in the lunch table shenanigans of the other players.  I didn't realize that he wasn't even in the same lunch as those other boys. Leave it to Carolyn to know who eats in which lunch period.  I guess I'm just fortunate to have enough other things to deal with in life that breaking down who is in what lunch isn't a priority for me.

Mr. Un invited the parents to get involved and encourage their kids to clean up their acts.  He sort of suggested/threatened to limit kids' playing time if they didn't correct their issues.

Tank is not perfect.  Far from it.  In fact, he's quite impulsive and goofy.  He's also very tall, but not necessarily seasoned at the game of basketball.  A late bloomer.  As much as we despise travel sports, Coach arranged for him to tryout for travel basketball once a few years ago.  He didn't make it.  Ouch.  The catch 22 here is that he doesn't see much playing time on the school team, and finding his way to make a team outside of school that will help him develop is a struggle.

After the game, I confirmed with Mr. Un that Tank was not one of the boys showcasing bad behavior during this debacle detailed in his email.  Mr. Un assured me that Tank wasn't at fault.  What happened next actually elevated Mr. Un's standings by a few points.  Just before he led the boys out to the waiting bus, he turned and shared a positive tidbit about my kid.  I was impressed that he appreciated what he told me . . .

'Tank has been doing a great job in gym class with this other kid.  Well, Tank - you can tell her about it,' he directed before he disappeared out the door.  Turns out there is an autistic 8th grade boy who is new to the school this year.  Tank makes a daily effort to chat with the kid to make him feel welcome during gym class.  Score one for the big hearted bench warmer!

At the risk of playing the helicopter parent, I am planning to respond to Mr. Un's email and flat out request that he does limit the hooligans' playing time.  As Tank pointed out to me on the drive home, he feels like he is the hardest working kid at practice and it bums him out to be one of the last kids off the bench. 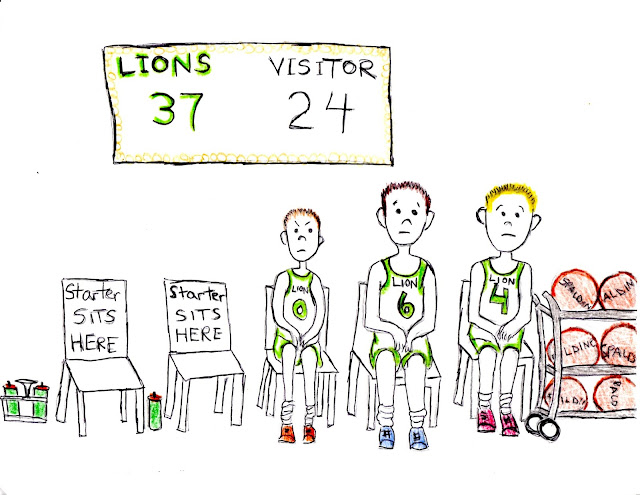 A little history. . . my beefs with Mr. Un, in no particular order:  #1.  Last year he yelled at a kid on Tank's 7th grade basketball team with the damaging:  'You suck at basketball!'  Regardless of the fact that this negative comment wasn't directed at my kid, I still wanted to alert the school.  I may be a self proclaimed old-school mom, but crushing a kid's self esteem at this age is wrong.  Tank begged me not to make a fuss about it.  I kept my mouth shut - against my will.

#2.  Mr. Un hesitates to put his second string players in until we are leading the other team by more than 14 points.  By the time the bench hops in the game cold, the buzzer is about to ring.  Trust me here, I don't get overly steamed about it.  It is just junior high basketball - but that's just it . . . IT'S JUST JUNIOR HIGH BASKETBALL!  Let's give kids more of a chance to gain some experience.

Eddie played for this same coach back when he was in junior high.  He was an outstanding player, and usually saw a ton of playing time.  Despite my love of watching my kid play, I cringed to see the kids who weren't given a chance.  Their body language said it all.  They drooped and slouched from their positions at the end of the bench.  I swear - it made my blood boil back then, not just now when it's my kid's turn to warm the bench.  Swear.

The school's motto is 'Character Counts'.  I included this reminder in my email when I asked that the coach consider this when he decides who is going to monopolize the majority of the minutes in the game.  I gently asked him to give a kid like Tank, who makes an effort to help a struggling classmate settle in, a leg up in the playing time department.  For what it's worth.

So, share your thoughts with me - would you email the coach or leave it alone?

The coach sounds like a first class jerk. My son Peter is in 8th grade and plays basketball. He's not very good but he is tall so he got a decent amount of playing time but it pained me very much when we would be up by a lot and the coach still wouldn't put in the 3rd string. Luckily this is Peter's last year in middle school and he will not be playing basketball in high school. I don't think I would email the coach. From the sounds of it, he wouldn't listen anyway. Your son sounds like a good kid. You are raising him right!