During the week, I had laid out a few outfits to pack for our long weekend in Arizona.  No final decisions were made as I kept getting pulled away from my packing task.  Now the Uber car was being summoned and it was time to pay the piper - or at the very least time to toss something inside the bag instead of arranging neat little 'maybe' piles in a semicircle around the bag.

All toiletries were on the bathroom counter.  Since Coach was wearing business casual on the plane, I opted to do the same.  Choosing to pack it instead of wear it, I stuffed my workout dry fit outfit and warm up  jacket in the suitcase.  I opted to dress in a flowy tie-dye shirt with a black cami bra under it and black skinny jeans.  Knowing the evenings would be a little cool, I opted for long pants and shirts that layered under my jeans jacket.

Curly arrived home from school relieved that we were still home.  I had assured her that she would see us for a minute after she got off the bus before we left.  When Curly turned on the tears, I initially thought she was emotional about our departure. 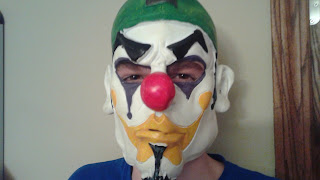 Turns out, some ass hole kid scared the shit our of our youngest child on the bus ride home.  This was ill timed considering Curly would be home alone for an hour until her friend's mom came to get her.  This fellow bus rider a.k.a. devil-spawn-kid convinced Curly that bad clowns were going to attach the school and kill all of the kids.  I trace this back to bad parents.  Idiots.

Coach came unglued.  He hollered at Curly for believing such crap from dumb kids.  She really had no choice but to stop crying and admit that it was all nonsense.  Apparently the stress of trying to walk out the door and have a kid reduced to tears about possible clown killers while anticipating traveling with a wheezing wife reared its ugly head.  There wasn't an opportunity for a calm soothing conversation.  Just, 'How dare you believe that kind of crap?  Those kinds of kids are stupid, don't sit near her on the bus again!'  After Daddy's verbal unleashing, a few hugs from mom sealed the deal.  Curly put on a brave face and wiped away her tears.

Just as we pulled up to the airport in our Uber car, Curly called me.  More tears.  I could tell she was trying to keep it together.  'Where's Mini?' she whispered.  Mini was supposed to walk home from school with her brothers.  Curly is the only bus rider because she isn't yet at the junior high.

I glanced at my watch.  Why hadn't she come home?  The boys had walked home, packed their overnight bags, and been picked up by their friends' mom as planned.  Eddie had run in the house, snacked a bit, and jogged back out to his car to get to his away basketball game.  No Mini?  That didn't make sense.

Now Curly was home alone.  That didn't add up.  I told Curly I'd hang up and call her right back after I figured it out.  A quick call to the mom who was supposed to be picking up the two girls for their overnight cleared things up.

Mini had decided to stay for art club with
this woman's daughter.  Still not sure how the friend's mom knew this and I didn't.  Since I don't do cell phones until high school, there was no way for me to call Mini.  Just as well - I probably would've hated myself for delivering a tongue lashing just as I was going away for the weekend.  Even though I felt like Mini, a characteristically excellent rule follower, deserved it.

I called Curly back.  Mini was at art club.  She should've gotten in touch with me when she chose to adjust her afternoon, but she didn't.  I would deal with her last minute decision to change plans later.  In the meantime, I assured Curly that her ride would be there in less than 3 minutes.

Once again, all was well in Curly's world.  A very key detail allowing this mother to head out of town.