I just returned from a long visit to a local park with the three little boys that I babysit for.  Although it is November 17th, the forecast called for a high of 70 degrees today.  I struggled to decide between a trip to the zoo and a more efficient adventure at a park.  Since our outing yesterday included a lengthy stay at the park, I decided that we would test out a different park location today.

Years ago I brought my kids to this park from time to time.  While my memory of its offerings had faded, I remembered that it had always been a big hit with my offspring.  The awesome layout and incredible equipment did not disappoint.  I chased the toddlers around for over an hour.  Two of them were thrilled with the zip line while the youngest guy preferred to stomp his feet in piles of leaves.   At noon I gathered them up, washed their hands, and served them lunch at a nearby picnic table.

With nap time (ahhhhh!)  approaching rapidly, I intended to head straight home after lunch.  When two of the boys hopped down from the table and made a bee line for the playground, I decided to give them a few more minutes to play.  Who can enforce a specific nap deadline on such an unseasonably beautiful day? 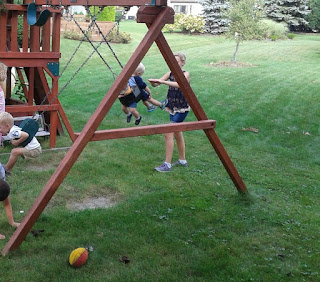 I mopped the stickiness off of their pudgy hands and smiley faces and parked the strolled near the toddler-geared equipment.  I appreciated that the older-kid playground structure was a bit off the beaten path, so I could keep the three of them corralled in one area.  There was a sandy area that I had eliminated from our possible play space the moment we arrived.  Since tots have a tendency to roam, I kept the sand pit in the corner of my eye just in case one of my guys started feeling brave.  Dealing with sand in the summer bites.  I felt no need to introduce those pesky little granules into my kitchen in November despite the fact that I plan to wash the kitchen floor tomorrow.  Even with the well defined boundary approach to the layout, I still felt like I was swiveling my head back and forth as I monitored all three of my little constantly-in-motion charges.

J.J. shot out of a tunnel slide with a huge grin on his face.  A kid who exited the slide a moment later sauntered up behind J.J. and gave him a little shove.  There were a couple of moms chatting on a park bench adjacent to the park equipment when we walked up.  I recognized the little guy as belonging to one of them.  Now only one mom was perched on the bench.  She said nothing, so I told 'Lil Bully not to push.  Ignoring my instructions, the kid pushed J.J. a few more times before coming up behind him and shoving him off of the hill-like climbing apparatus.  I picked J.J. up off the ground.  He had only been on the bottom ladder rung, so he hadn't fallen very far.  Not the point though.

'Hey,' I hollered, 'Don't push him down.  Play nice.'  Glancing over my shoulder, I called to Ms. Passive on the bench, 'Is this your kid?'  No, she informed me that it wasn't.  She did know him and she called out to him, but she didn't move off of the bench to speak to him more directly or remove him from the playground for a minute.

'Lil Bully was about the same size as J.J., but based on his speech and his behavior he was probably three or four years old.  J.J., who is a tall, solid beast of a kid for his age, is only 18 months.  Ms. Passive must have alerted 'Lil bully's mom, Ms. Inattentive, that I had pointed out that her kid was pushing J.J. around.  They exchanged words in their foreign language before Ms. Inattentive uttered very loudly, 'Kids are kids.'

What a mind blowing statement!  Just when I had convinced myself that kids were aliens. 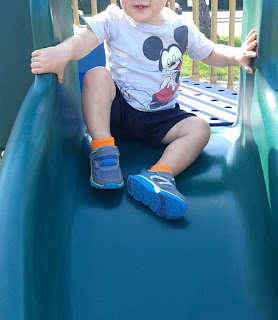 Moments like this remind me that I might be too old to be working as a babysitter.  Physically I can handle it.  In fact I'm quite sure that if I challenged Ms. Inattentive to a brisk jog around the recycled tire flooring of the playground, she would have collapsed before she passed the brick public restroom building a stone's throw away from where we stood.

The real problem is that I'm too aged to give a damn what anyone thinks.  Besides, my additional years and experience give me a bit of a leg up on clueless, young parents that I encounter as an occupational hazard.

I spun around to face her.  Did she think that tossing a generalized blanket statement out about juveniles would excuse her kid's bad behavior?  'Kids are kids, but that's why you have to watch them,' I enlightened her.  That's when she shared with me that she was running after another one of her kids.  I completely understand how that happens, but her kid had pushed J.J. down several times in the span of several minutes.  If she couldn't be watching him for that long, then she should've dragged him with her to chase her other rugrat.  Since she was fortunate to be at the park with back up in the ill equipped form of Ms. Passive, she could've asked her to keep an eye on 'Lil Bully.  'I get that.  I'm watching three right now myself and I have six more at home,' I quipped.  'That doesn't make you better than anyone,' she barked.  'Of course not,' I chuckled, 'It just means that I know what it's like to handle crowd control.'

Please note that the entire time this short discussion occurred, two things happened.
1.  I never lost sight of the three boys I was watching, helping them up and down slides and up and down ladders.
2.  Ms. Inattentive never stopped reciting her mantra 'kids are kids'.  One thing that didn't happen was that Ms. Inattentive never reprimanded or disciplined her 'Lil Bully.

When I announced to my little tow heads that we were going to head out in two more minutes for nap time, 'Lil Bully attempted to rub it in J.J.'s face.  He failed to understand that supersized J.J. was too young to understand his little taunt as he sat down to go down the slide.  Revealing his age and his understanding of the situation, 'Lil Bully called up to him, 'You have to go home for your nap time in 2 minutes.'

Each time Ms. Inattentive repeated her favorite phrase, I responded in some way.  She rounded up her little brat and moved her stroller to another area of the park where I'm assuming she continued to let him act unacceptably with no consequences.  A few minutes later I steered my gang towards the car.

If I didn't love nap time so much, I would've skipped it so that I could follow her to the other side of the park and educate her with a little additional comment:  'Kids are kids, but parents who let kids be kids end up with kids who behave badly.'