'Get your shit together!'

Coach and I began dating the summer that I finished college.  That fall he returned to college to begin his senior year.  We had known one another for years.  My family moved down the street from Coach the day before my high school career was launched.  When my mother and oldest sister toured area schools in preparation for our move, Ann clearly remembers Coach being called on by one of the grade school teachers as they observed his class.  'There is a cute, Irish-looking kid who is going to be in your class,' she shared with Pat, who cared little about the looks and heritage of his future classmates.

Although I had never set foot in the high school until the first day, I was relieved not to be in the same boat as my 8th grade brother, Pat.  Starting over as an 8th grader didn't appeal to me in the least.  During Pat's first and only year at that school, he became good friends with Coach.  Both my folks and Coach's folks were busy raising five kids, and they quickly became friends.

While I knew Coach a bit from the time he spent hanging out at our house when Pat had a group of friends over, I became better acquainted with him that fateful summer after I graduated from college.

Growing up, we often sat near his family in Church.  I knew his parents to say hello, but I didn't know them well.  For years I thought that his father, Senior, was actually an older brother because his youthful appearance, intensified by his good genes, misled me.  The seemingly dramatic difference in the ages of Coach's folks was exaggerated by his mom's struggle with her choice of hair dye and wardrobe selections.  An older appearance than I'm assuming she desired became the unfortunate end result.

There were stories about how Senior behaved and about how his wife, Saint, tolerated it.  Senior often lost his temper.  He was opinionated and outspoken, occasionally causing embarrassing situations at his kids' sporting events.  I don't think I attended any of the basketball games when Senior lost his temper.  The reality of how this man conducted himself escaped me.

After spending much of the summer of '93 flirting, Coach and I eventually began to go out on legitimate dates.  About a month later, he returned to college.

Labor Day weekend, he returned home for his sister's wedding.  As his date, I met some of his relatives and a group of his college friends who were invited to the wedding.  My parents were also guests, and I stood chatting with them while we watched Coach pose for pictures with his family on a gazebo at the reception site. 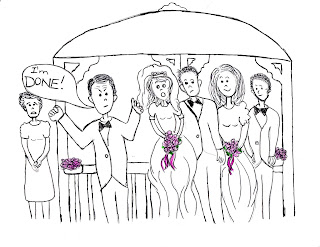 The photographer arranged and rearranged his subjects and snapped many pictures.  Suddenly without warning, Senior peeled himself away from the center of the group.  'That's enough, I'm done,' he shouted over his shoulder as he marched off in the direction of the bar.  The many bystanders froze exchanging uncomfortable glances.  Coach's sister, the bride, was reduced to tears at her father's lack of cooperation.

The rest of that eventful weekend flew by as Coach and I  hit the bar scene with the out his out of town cousins and other guests after the early afternoon reception ended.  I offered to drive Coach to O'Hare airport for his return flight to school.

In 1993, individuals without tickets were still allowed to accompany passengers to their gate.  Coach and I selected seats off the beaten path while we waited for his flight to board.  The row of empty seats faced a window looking out at the planes taking off and landing.  Behind us a wall divided the small area from the rest of the gate.

We spoke in low whispers, held hands, and shared kisses in our little private corner of O'Hare.  When it was time to board the plane, we stood up and began to walk towards the counter.  Much to our surprise, an agitated Senior stood near the airline employee who was checking in passengers. 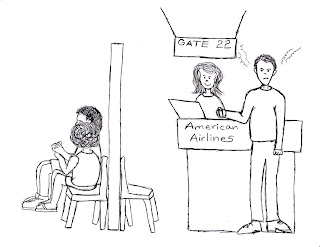 Coach had forgotten to pack the remaining pills of an antibiotic prescription for a recent bout of bronchitis.  His Dad drove all the way to O'Hare to deliver the pill bottle to Coach.  He grew frustrated when he was unable to locate his son.  Never exuding patience, he had waited at the counter until Coach showed up to board the plane.  When he saw his senior in college approach, he slammed down the pill bottle on the counter with a loud bang.  He shouted, 'Get your shit together!' alerting most of the passengers in the terminal of his disgust.