Last week I brought Mini to her fiddle lesson at my brother Pat's house.  Mini disappeared down the basement stairs with her fellow fiddle playing cousin, while I sat down at the kitchen table.  My plan to pay a few bills and do some work on my iPad was interrupted by Pat.

Initially he was busy loading the dishwasher and cleaning up the kitchen after their dinner.  My little niece popped into the kitchen wrapped in a towel explaining that she was unable to locate any soap while taking her shower.  She was clearly hoping that her 'rinse' was sufficient.  Pat sighed and directed her back up the stairs.  He followed her insisting there was plenty of soap available.

When he resurfaced, he turned to me while loading dishes and asked me if I had a plan for when Mini would quit Irish dancing.  'Nope,' I answered while trying to stay focused on the check I was writing.  My heart-rate increased a bit with his next statement.  I knew where this conversation was headed.
'Well, she can't do both Irish dancing and Irish music,' he announced.  Now my blood began to boil.  Unfortunately, I've nearly severed my tongue over the years in my never ending attempt to bite it in my brother and sister-in-law's presence.   I often fear that I will say something that will cause our relationship to become awkward.  At this point all I could think was 'awkward be damned - I'm not going to nod my head and feign agreement on this one'.
'Pat, she is an Irish dancer and an Irish musician,' I hissed stating the obvious.

Pat wrinkled his forehead and explained that Mini had once shared with them that she didn't like Irish dancing.  Translation:  he and his Irish bride believe that Mini has been longing to retire her dance shoes for some time.  Poor Mini must suffer through continued dancing instruction and competition because her loony mother is forcing her to extend her budget-draining, dancing career.  The nerve! 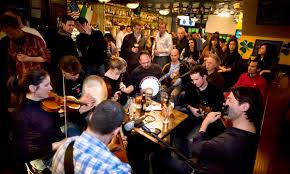 'Well, she misses so many of the sessions and this is a big part of it,' he explained.  Pat and his wife organize sessions several Sundays a month.  They prefer that their students attend as many of them as possible.  For Irish musicians, sessions are equivalent to pick up games for basketball players.
These informal gatherings often take place in a bar where musicians play and share music with one another.  Pat's students are encouraged to start off a tune for the group.  Gradually anyone who knows the same tune will join in on their specific instrument.  The format allows musicians to become better equipped to learn music by ear while also becoming more seasoned at performing or playing with other musicians. 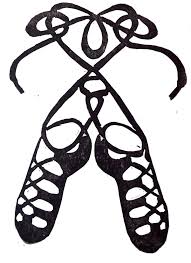 While I understand the concept and the benefit of participating in sessions, we often experience scheduling conflicts.  Our current issue is that there are often Irish dancing lessons offered at the same time as Pat's sessions.  Since Mini is preparing to dance at the Midwest Championships over Thanksgiving weekend, her dancing schedule ramps up a bit in the fall.  Toss in a trip to Iowa to watch Laddie's JV football team play on a Sunday in October, and a religious education event landing on the calendar next Sunday, and our Sundays are too busy for either music or dancing.

Ironically Mini attempted to attend the session that very afternoon.  Unfortunately Pat cancelled that session at the last minute.  Because the mom who handles the group text messages for the music parents failed to share the message with everyone, Mini still showed up thanks to my mom's willingness to chauffeur her there.  My folks live a few miles from me and they thoroughly enjoy sitting in on the casual music gatherings.  They frequently pick up our fiddler and transport her to the session.  In response to Pat's quip that Mini doesn't attend enough sessions, I quickly countered that she had carved out the time that very afternoon.  It wasn't our fault that he had cancelled it.

In his next breath, my arrogant brother turned to me and asked, 'How many of the sessions have YOU been to?'  He may believe that my involvement is relevant, but in my world nothing can be further from the truth.  'Well, since I am not an Irish musician, I don't feel compelled to attend,' I countered.  I desperately wanted to share with him how helpful it was that our folks were willing to grab Mini on their way to the weekly event so that I didn't have to give up a Sunday afternoon to go.

My parents' aid isn't historically offered to me as easily as it is to some of my siblings.  Because Pat's in-laws reside in Ireland, my mom rarely declines a request to help Pat and his wife.  She feels it is her duty to assist them whenever possible since they are short on grandparent volunteer contributors.  I am also acutely aware of an arrangement that has been extended to Pat.  He gathers up his four kids and arrives at our folks house regularly on a weekend afternoon.  Mom fixes his kids' some lunch, Pat visits with Dad, and the kids play with the enormous supply of toys for hours under Mom's supervision.  Meanwhile back on the home-front, Pat's wife enjoys some alone time.  Coach and I have never been offered this hospitable option.  Although I wasn't holding back in my heated discussion with Pat, this welcome-wagon privilege he is accustomed to didn't occur to me until the next day when I was still stewing over the audacity of my parents' number one son.

I began to absently collect my small stack of scattered paperwork from my brother's kitchen table.  My escape from this craziness was imminent.  'This is reminding me of a conversation I once had with your wife when she told me that my husband needed to become more interested in Irish music.'  I spit the words at him, since I had been holding my frustrations in on that unanswered commentary for a year and a half.  'You two don't get to fucking decide how my husband and I spend our time and what we choose to be interested in,' I hollered.

I questioned whether or not he would be dropping Mini from lessons unceremoniously as he did Tetanka and Reggie.  My boys hadn't been able to keep up with the pace of the lessons that were geared towards their predominantly home-schooled counterparts.  Pat shared with me one day last fall that Tetaka and Reg weren't a good fit for the class, but that he would keep me posted when he had a better class option for them.  In the year since he uninvited them to lessons, no mention has been made of a new class time for them.  Tetanka in particular, who suffers from anxiety and who struggles with change, found the shunning difficult.  After a few sleepless, emotional nights, I assured Tetanka that I would work to find another teacher for him.  Mini's dancing teacher provided he and Reg with a few music lessons, but her time is mostly absorbed by her dance schedule.

Ironically I overheard a comment Aunt Fiddle made as she abandoned the basement lesson just before Pat launched this nervy conversation with me.  She told Pat in a huff that the three girls were ill prepared for their lesson.  She followed that admonishment up with the fact that she felt Mini was more prepared than any of them.  Could it be that 'Mini the dancer' was more prepared than her non-dancing buddies?  Shock.

Pat shared with me that he and Aunt Fiddle had yet to discover anyone who was able to be successful at both music and dancing.  Again the thought didn't occur to me until I was letting off steam at home.  Why, I wonder, do Pat and Aunt Fiddle get to define success for other people's kids?  I hadn't asked him whether or not he felt she was successful.  She does well at both, and she enjoys both activities immensely.  In our family, that is success.

Eventually I tossed my money for the lesson on the table and yelled down the stairs to Mini that we needed to leave.  'I guess we are done here,' I announced to my baffled brother.  I suppose he forgot momentarily that I was a witness to his upbringing.   My parents programmed him thru countless efforts to believe that he is always right.  As far as he is concerned, he has never been wrong, nor will he ever be.  If push came to shove and the world experienced a flood of epic proportions, this guy believes he would walk on water.
Perhaps he could simply 'step over' the water, since he seems to have mastered the gift of overstepping!