When Prince died unexpectedly a few months ago, it made me think of an awkward situation that I hadn't pondered in years.

My younger brothers and I were lounging around in their room watching a music award show or the academy awards or something along those lines in the early to mid 80's.  I was around 12, Pat 11, and Mike 10.

Pat and Mike shared a room that featured wall to wall antique furniture.  Mom and Dad collected antiques.  After stuffing as much of the delicate yet pricey purchases as they could in most other rooms in the house, the boys' room showcased the aftermath of their most recent antique shows.

This was my brothers' cross to bear.  They never complained about it, but I don't think they knew any better.  If you asked me, and no one did, I would say that the sports-themed wallpaper hanging in the background clashed with the carved wooden ornate headboards.

Maybe the Pat and Mike tolerated the old-lady styled furniture because they had a television in their room.  When Mom and Dad finally upgraded to a color TV for the master bedroom, Mom decided that the old black and white set would land in the boys' room.  That TV placement was made despite the fact that there were three older sisters.

Age didn't matter in our Irish Catholic family.  There was, however, a huge focus on whether or not an individual came equipped with an extra appendage.

I don't believe any of us were overly interested in the show, since we were all pretty clueless when it came to pop culture.  Who could expect us to know anything about Top 40 music when Dad only bought cars with a standard AM radio, and we didn't have cable?  But sure as shit, we sat and watched some of the awards.

That formerly-mom-and-dad's ancient black and white set only received certain channels- on a good day.  Perhaps the kid wrestling with the dial and monkeying around with the bunny ears antenna grew tired of trying to locate a 'real' show. 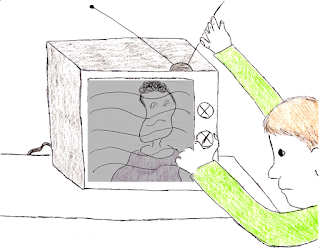 It was uncommon for us to all crowd into Pat and Mike's room when the spacious family room boasted a bigger, color television set.  Years prior the knob had broken off of the bulky, console TV that was meant to resemble furniture.  Changing channels became a challenge.

Of course remote controls probably existed for newer model television sets.  We weren't that lucky.  Regardless of the inconveniences presented by watching TV in the family room, we typically gravitated towards that space and that set.

I don't remember the circumstances of why we escaped the family room that evening.  If I had to guess, I would assume that Dad was slumped over his family room desk with his forehead resting between his fanned out fingers and thumb.  The thick fingers of his free hand drumming intensely on the fold out desk top.  Uh-oh.  His checkbook wasn't balancing.

The unfortunate placement of our father's desk in the family room killed many a family moment.  If he became frustrated about finances or some screwy paperwork situation, the volume on the television couldn't compete with his interruptions.  There was very little chance that any of us would stick around in such close proximity to his impending outbursts.

Perhaps we had retreated upstairs to avoid listening to Dad spout off about the cost of things, inflation, or God forbid a missing receipt.  Every purchase Mom made needed to be validated with the receipt.  She was expected to tuck said receipt into the little left hand drawer of his desk.  Since every expenditure needed to be accounted for, he relied on the intricate filing system of stuffing receipts into the little drawer.

Of course the uninteresting show heated up just as Mom entered the room.