Last week I drove to college orientation with Laddie.  Most colleges conduct the orientation process early in the summer - weeks before students show up for class.  Meeting future friends, asking important questions, and planning your class schedule are clear advantages to this system.  When Coach and I went away to college in the late 80's and early 90's, orientation weekend happened when our folks moved us into our dorms.  Dripping in sweat after hauling multiple loads up flights of stairs and waiting to cram boxes into a tiny, over-used elevator, we attended information sessions, mingled at a cookout, and signed up for classes.  I'm in favor of the new approach.

Laddie's future dorm room wasn't available for us to look at, because it was being painted.  We were able to see similar rooms in the dorm where students were living for the summer.  We got the general idea.  Poking around in the dorm reminded me of the summer in 1984 when my older sister was preparing to go away to college.

My sister, Ann, was the first sibling in our family to embark on college.  She was very quiet and reserved, and it was hard to imagine her living away from home.  Once she received her dorm assignment she and my mom began to shop for essentials for her new abode.  Ann contacted her roommate and they discussed color schemes and whether or not they would coordinate their shared, small space.   In an attempt to make her dorm room cozy and homey, our grandma offered to make curtains for their window in a pink and white striped fabric to match their bedspreads.  Mom called residence life and became frustrated when they were unable to supply her with a measurement for Ann's future window.

In mid-July of that summer, I was scheduled to attend basketball camp at the same college where my sister was enrolled.  While I was packing my bag to leave for camp, Mom handed me a measuring tape and careful instructions from grandma on what part of the window to measure.  They had written down the name of her dorm and her room number.

I was 12 years old.  The college was very small.  While the campus was not difficult to navigate, my camper accommodations were on the other side of campus from my sister's dorm.  The camp directors only informed us on how to get from my room to the dining hall and to the athletic facilities.  Never afraid of a challenge, I marched into the administrative offices of the college during our free time one afternoon.  I spoke to someone who gave me permission to try to find my sister's future room.  With tape measure and small notepad in hand, I wandered in an aimless fashion staring at the names of the buildings.  At last when I was just about to give up, I happened to come across Ann's dorm.

I climbed the giant stone stair case and took the elevator to the third floor.  I stepped off the elevator and into an unexpected hallway of chaos.  Sweaty children and chatty adults milled around in the muggy hallway.  A blaring radio, abandoned hula-hoops, and an ironing board were randomly placed in the hallway.  Much to my surprise a selection of the halls inhabitants were wearing make up.  Not just any make up . . . clown make up.

A woman, noticing my utter confusion, offered me an explanation.  'We are here for clown college,' she offered.  I couldn't think of a response, so I just nodded as if this made sense.  'We are all clown families, and we are here to practice our true clown talents before we audition for the circus.'  As she filled me in on the specifics, she swept her arm in a dramatic fashion as if she was presenting an alternative universe to me.  Once the initial shock wore off, I slowly shuffled down the hall.  I inspected the room numbers as I followed my new clown buddy/tour guide further down the corridor.  I briefly described my measuring-for-curtains mission while stepping over discarded clown props and approached Ann's room.  A man occupying Ann's room sat concentrating on applying clown makeup in front of a lighted mirror.  Other, less-busy family members were happy to assist me in holding one end of the measuring tape as I marked the width and height of the window.  Before I left, I thanked them for their assistance and wished them luck at the upcoming clown event. 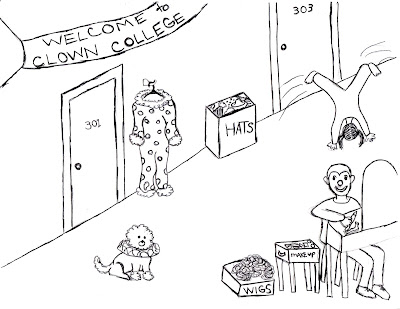 I realized on my walk back to my dorm that I had probably walked in circles while I was trying to chart my way to Ann's dorm.  The return trip included less zig-zags, but my head still felt a little dizzy.  I don't think it was from the heat.

I'm relieved that there seems to be less coordinating in dorms today.  Eclectic.  I think that is the going style.  No one has offered to sew drapes for Laddie's dorm.  I doubt anyone could encounter a clown college camped out in a future dorm, if they attempted to sneak in and get measurements.  That had to be just my luck.
Posted by Ernie at 7:14 PM