If you've read my three 'Breakfast Club' posts, then my led foot condition is not new to you.  While I was accumulating my collection of tickets last year, I wasn't aware that if I was ticketed a certain number of times my license would be suspended.  Had I understood the repercussions, I probably would have gone to court to request supervision to avoid my current situation.  I am now well versed in the importance of not speeding and the State of Illinois' lack of communication skills.  Learning the hard way can be a painful process. 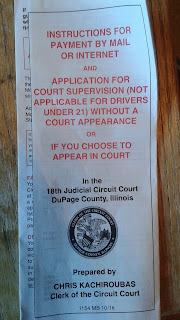 Back when I received multiple warnings in one year, the kids' presence in the car seemed to aid my plight.  The officers took pity on me.  In April of 2015, a quick glance at the dashboard clock alerted me that Reggie and Curly's school bus was going to beat me home from work. I was pulled over rushing away from my frustrating job.  The cop wasn't interested that Curly hated getting off the bus to an empty house - even if just for ten minutes.  I didn't even bother to explain my crappy employment situation.  Ticket number 1.

In July, Lad announced his plan to visit friends that he met while on a mission trip a few weeks prior.  Great!  His new group of com-padres live in Green Bay, Wisconsin.  In his teenage mind, driving three hours away seemed like a perfectly acceptable scheme.  Unfortunately, Lad's lack of expressway driving experience impacted our comfort level.  Laddie driving solo to Green Bay in our car was not going to happen.  I encouraged him to locate a college somewhere in the vicinity that he would like to visit.  My 'two birds, one stone' mentality allowed Lad and I to check out University of Wisconsin, Steven's Point before heading over to Green Bay.

With the college tour behind us, our outdated GPS confused us while en route to Packers' territory.  We had just switched from one expressway to another.  I slowed down in order to decide where to exit since the GPS was instructing us to drive over a median in order to reach our destination.  A half mile from our correct exit, I noticed lights in my rear view mirror.  My stomach flipped as I pulled onto the shoulder.

Apparently the speed limit had dropped from 70 to 55 between the two expressways.  Although I hadn't noticed the lower limit, I was clearly the slowest car on the road.  Other cars sped past us as we reduced speed and carefully checked out each sign in search of the info our GPS couldn't supply.  This cop could've cared less that we were from out of town, somewhat lost, and unaware of the change in speed limit.  I was later awarded the designation as the last Illinois resident to realize that Wisconsin police officers target Illinois folks driving in their territory.

After checking into bus and train schedules online, we decided that the best way to retrieve Laddie from Green Bay was to drive up and grab him.  He had spent half of the week with his friends, and I was slotted to retrieve him on a Sunday.  His host family generously offered to drive him an hour south to meet me.  At first I planned to drive the entire round trip myself, but they insisted on cutting my drive a bit shorter.  I didn't sleep well the night before, and awoke at 4 am unable to catch any more z's.

Coach felt Laddie's Wisconsin trip was unnecessary, and I recognized that his time would be better spent working on his basement refinishing project.  After over a year and a half invested in this fix up plan, I devoted my time and resources to all other family needs in order to buy Coach more time to focus on the lower level.  A construction zone overtaking the family's basement space led to over crowding and mounting clutter in every other area of the house.  Anxious to enjoy the benefits of the final product along with the advantage of regaining an available husband, I refused to interfere with any available progress.

A lack of traffic, my eagerness to complete the road trip before becoming incapacitated by drowsiness, and my dislike of driving while using cruise control resulted in another ticket just over the Illinois border in Racine.  My mission to only drive slightly over the speed limit was unsuccessful.  Two tickets in one week was a new record for me.  I drove home at a snail's pace as Laddie slept soundly in the passenger seat.

I scored my last ticket in October while driving to collect some videos that I was having transferred to digital format for my parents' 50th anniversary.  My kids' Irish dancing teacher had recently unleashed a verbally abusive assault on our young offspring.  A confused Coach inquired of me, 'Wait, we are paying this guy to talk to our kids like this?'  Not necessarily racing to pick up the incredibly expensive project, I was definitely not focused on driving that morning.  My mind whirled with the weight of this difficult dancing situation.  In my distraction, I missed the fact that the speed limit reduced to 35.  Ouch.