the worst play date ever

There was a time when I arranged play dates for my children and looked forward to the opportunity to build friendships with other moms.  I cleaned up my house (at least until once I got to know the mom-friend better, and then I was happy if there wasn't peanut butter smeared across the fridge, if there was a path through the toys to the couch, and if most of the breakfast dishes were at least cleared into the sink), I prepared a snack, and expected to spend the morning becoming acquainted with the other mom.  Of course I also hoped that little toddler Laddie would share his toys and that he and the other little tyke would hit it off.

It's not that my life is so full of friends today that I don't have room for more relationships . . . but now that my kids are a little older, inviting a friend over to play has taken on a whole new meaning.  Nowadays I try to steer my kids towards inviting friends over who aren't holy terrors.  I hope that my clan are drawn to kids who will be easily amused by what we have to offer.  'Please', I think to myself, 'don't ask me to call that kid who tears up the house, refuses to include your little sister, and is so demanding that he is a major high maintenance nightmare.'  I prefer the kid who clicks so much with Reggie (or whomever he/she came to hang out with) that I don't even know they are here.  These are the friends' whose number I keep on speed dial.  They typically demonstrate basic manners, think it is cool when the other siblings join in, and don't constantly tattle on anyone.  I cross my fingers when I call hoping that they are available, so I don't have to invite the monster on the 'B' list.

Families with siblings that match up with my offspring in age and gender appear most often on my 'A' list of invitees.  This is, of course, assuming that they have previously passed the 'monster-kid' test.   A few years ago when my kids were at a new school, my research on 'monster-kids' and available sibling match ups started from scratch.  Bummer.  After having kids attend our former school for nine years, my prior research was definitive and reliable.  I knew just what I was getting into before a kid entered our house.  Even the new batch of kindergartners were typically no great surprise for me.  I was familiar with most families before they started school.  This is in large part because I have older kids.  I was also involved in running a mom and tot group for the school, so I witnessed the little buggers up close and personal before their academic existence began.  Smart, I know.

The 'add-a-sibling' feature is a plus when calling around for play dates.  (For the record, I hate the term 'play date'.  I use it here, because I believe that it is fairly universal, but seriously the term makes me cringe).  If I call one house and hang up after arranging to have three friends come over, then three of my kids are happy.  It's a wrap.  One drop off time, one pick up time, many happy faces - done!

Three years ago, Mini made friends with a sweet little girl named Lola at her new school in 3rd grade.  Even the teacher gave the friendship a ringing endorsement.  She clucked to me one day after hearing that Lola was coming over, "What a great pair!  They are so sweet together."  Awesome!  Made a mental note of that.  Of course having girls over is almost always smooth sailing, and this was no exception.  The girls played quietly together . . . giggling, drawing, and mainly hanging out in Mini's room.  Curly's presence was tolerated, which was an added plus.

I learned that Lola had a younger brother the same age as Reggie.  While they weren't in the same 1st grade homeroom, they knew each other from math group.  Because Lola was so sweet and well mannered, I suggested that we invite over Lola's little brother, Kyle, the next time Lola came over.  Reggie was on board with the plan.  It is a fact that Reggie would prefer to have a kid come to our house to play on average of three or four days a week.  Not happening.  Our house is busy enough.  I leave Eddie in charge a  lot when I have to run my other kids to activities, so little friends hanging at the house is not always convenient.

The first time we invited Kyle over, he couldn't come.  Reggie was bummed.  We tried again over Spring Break.  It was 2012 and I was preparing to host Easter at my house, so I decided that the kids could have someone over while I got my housework done.  It was a go. 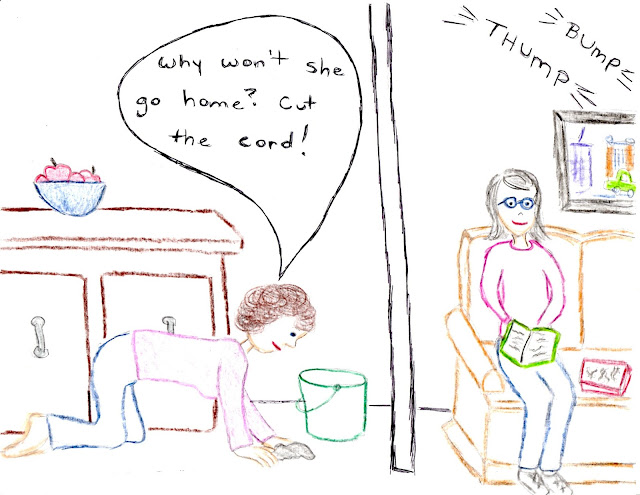 Lola and Kyle arrived and their mom stepped inside the front hall.  I chatted with her briefly, and she smiled very shyly and explained that Kyle was hesitant to come over since he hadn't been at our house before.  Got it, nervous kid, I will have to stay in the loop and make sure no one locks him in a closet or anything.  (Wait there was more).  She promised Kyle that she would stay this time.  She didn't intend to stay and chat with me for five minutes until he was comfortable.  She held up her book to prove that she would be occupied for the duration of the play date.  After I picked up my chin off of the front hall floor, I invited her to make herself comfortable in the living room.  I've never been so aware of the dust on the furniture, the dirty socks abandoned under the coffee table, the scattered books of piano music surrounding the piano, and the pile of projects, paperwork, and photographs overflowing on the dining room table in the adjacent room.   Shit!

The other issue that was unavoidable and more difficult to explain than the state of the living room, was the presence of my teenage son.  Laddie and Eddie's room is above the living room.  As I nervously gathered piano books and tucked dirty socks in my back pocket, it suddenly sounded as if Laddie might join us in the living room . . . via the ceiling.  He was in fact performing some form of torture on his little brother, Tetonka.  Perfect.  I have a kid in the house who is afraid to be here, and now he has reason to be afraid.  (Note to self, write Laddie our of the will).

I quickly excused myself to deal with the 'boys will be boys' sounds from upstairs.   It goes without saying that Laddie has never been yelled at with such hushed tones and clenched teeth.  It was a deep, dark whisper that I threatened his life with.  'There is a mom down there who has decided to camp out in my living room for the next few hours.  Please, let's not reveal to her and her quiet little children that we live like animals!'  This tactic was successful at getting his attention, and since Laddie performs well in a crisis, he behaved as best he could for the duration of their 'stay.'

After our little mother-son bonding moment, I carefully avoided going back into the living room again.  Awkward doesn't begin to sum it up.  I couldn't wait to call Fozzy to share the latest loopy-mom infraction with her.  I couldn't call her, however, because the offender was in the next room.  Fly on the wall!  I chose instead to try to go about my housework tasks as if this was normal 'play date' protocol.  I crouched on my kitchen floor and scrubbed it.  Out of the corner of my eye, I could see my visitor intently reading her book while I engaged in food prep.  I secretly wished I hadn't been so generous with the 'pick up' time, which had evolved into a 'get out' time.

I must note that this mother was very sweet, and clearly very aware of her children's needs.  I require my kids to suck it up and act as expected without much negotiating for feelings.  Perhaps that is why my kids can't wait to get invited to someone else's house.  They run to the door and don't usually look back!  I do believe that the play date went smoothly, but I haven't invited Lola, Kyle, or 'can't cut the cord' mom back since.  This was one package deal that offered more than I bargained for!
Posted by Ernie at 8:00 AM